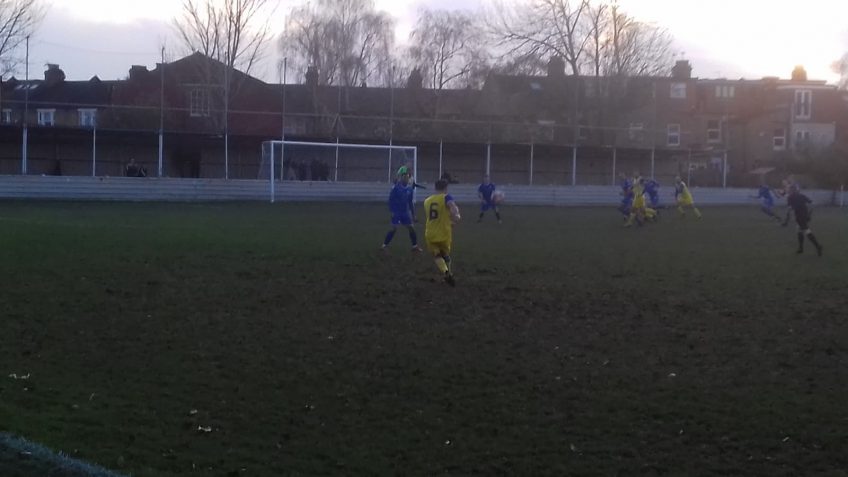 League titles are certainly not won by Christmas, but Joshua Osude’s stoppage time goal that handed Hashtag United a 1-0 away win might have some major significance come April time.

With only a mere point seperating the top two teams at the start of play meant that the game was a tight battle with both defences keeping it tight. It meants that Stow’s Dwade James was man-marked while Harry Honesty and George Smith found themselves under lock and key. Hashtag’s Luke Wilson put in a defensive masterclass, with plenty of tackles, blocks, deflections and headers to ge the ball away from Louis Hawes’ goal; while Stow’s Stanley Muguo also sttod out as he halted Honesty on a number of occasions.

Therefore the opening 15 minutes saw very few chances as neither defence gave an inch. Stow did have one corner winging its way towards the back post but Wilson headed that one clear before then blocking Emiel Aiken’s shot on goal. Hashtag meanwhile had a free kick headed away by Jamie Bennett.

Ben Crilley had a shot deflected away for a corner in the 20th minute and then soon afterwards the same Stow player got his head onto the end of a Stow corner which Hawes saved.

The game was a little bad-tempered at times, a number of yellow cards were dished out, including one for Stow manager Ryan Maxwell for an altercation with Ross Gleed. Gleed maybe should have been shown a yellow for upending James on the half hour, but the free kick just outsdie the box ended up being lashed over the bar by Vinny Murphy.

In the 33rd minute Callum Ibe managed to twsit and turn his way into a position to fire a shot just wide. Then James was able to work his way into Hashtag’s box but his cross was cleared by Wilson.

It was soon the Hashtag bench’s turn to be annoyed when a good ball to Smith set him free but Bennett’s over-zealous challenge won a free kick, but to the annoyance of the Hashtag team came with out any card being dished out. It was a very similar foul to the one Gleed had done on James – both maybe deserved yellows but the referee at least showed consistency by not doing so for either foul.

James Bransgrove blocked a shot from Honesty five minutes before the break. That gave Hashtag the impetus to put together another attack that won them a corner after Honesty’s cross was turned behind by Muguo.

James had been kept quiet in the first half, but he was able to have a run on the Hashtag goal within two minutes of the re-start but Farai Tsingano ended it with a solid challenge, then a minute later Bransgrove was getting down low to save a shot from Honesty.

The game was then back to defences standing firm, Murphy the Stow Captain halting a couple of Hashtag runs, while Wilson cleared a couple of Stow balls that made there way into the Hashtag box. Muguo had to hook a dangerous looking Hashtag cross clear but then in the 57th minute Jesse Waller-Lassen tried his luck with a shot aimed towards the top right hand corner that needed Bransgrove to jump high to keep out.

Ibe was able to link up with Samrai Gebrai just past the hour mark that won the hosts a corner, then Aiken had a cross-shot cut out by Hawes. In the 70th minute of this tense battle the leaders then saw Waller-Lassen unleash a shot from distance that was again well saved by Bransgrove. Waller-Lassen went on to drill a free kick over the cross bar in the 74th minute, then five minutes later Ibe did likewise with a shot outside the box.

Going into the final ten minutes and it was looking like something spectacular was needed to break the deadlock as both teams had effectively closed down the other. Gebrai had a long range shot deflected away for a corner in the 87th minute.

But then in stoppage time came the all-important goal. Smith burst through on the counter-attack and had a shot saved by Bransgrove but Osude gobbled up the rebound and lashed it home to the delight of the away bench and their travelling support.

There was barely enough time left for Walthamstow to get back level; in any case the Hashtag defence which had worked so well as a unit were not now going to show any sympathy towards Walthamstow and they were able to close down any ball that came their way in the closing stages of the game.

The victory keeps Hashtag top, extending their lead on the table by two points over Saffron Walden Town who now sit 2nd after their victory over Takeley. Stow slip to 3rd and are now four points behind the leaders.