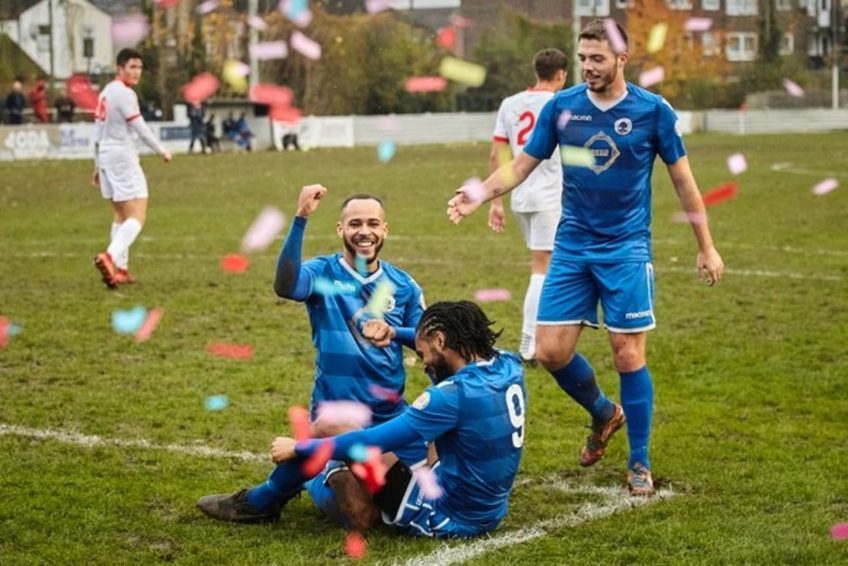 Hadley had to come from behind to make it nine wins from nine at home this season after victory over Tower Hamlets at Brickfield Lane. Sam Edwards netted the opener by chipping home to give the hosts the lead but Suaibo Balde netted a rebound to equalise before the visitors led at the break after Ezra Ndukuba netted a spot kick. But the home side levelled when Manny Hammond sent a looping header into the net and then netted the winner in stoppage time from a Sam Edwards penalty, meaning the hosts are just four points off the leaders in 5th.

After grabbing their first win last time out visitors Sawbridgeworth Town came back down to earth with a bump after being thrashed at Lowfield against Hoddesdon Town. Blue Gallagher gave the hosts a 28th minute lead before they doubled that advantage on the hour mark through Jack Gibbs, and then Jordan Halls netted three minutes later to increase their advantage. Gallagher then grabbed another midway through the second half before Connor Bolton capped a fine day for the hosts ten minutes from time by adding a fifth.

The Foxes grabbed all three points at Cricklefield after victory over West Essex, Jerold Cobblah gave the hosts an 11th minute lead but Callum Bloss levelled for the visitors nine minutes later. Larry Akanbi though netted the winner eight minutes from time to hand the home side the victory.

Tony Martin and Hassan Nalbant both netted braces as Redbridge thrashed Enfield at Oakside. Martin netted the opener after ten minutes before Tom Harvey doubled that lead three minutes before the break, and it was three early in the second half as Connor Okus netted. Nalbant then added goals on 67 and 74 minutes before Martin completed the scoring in stoppage time to hand them back to back victories.

Takeley missed out on the chance to go top of the table after they drew 0-0 at The Recreation Ground against St Margaretsbury who themselves go ninth as a result of this point. Takeley slip to 3rd on goal difference and are a point off the leaders having played three games more.

It’s six wins in a row for the hosts now as they moved up to sixth following a 3-0 home win over Clapton at Hargrave Park. It was goalless for the opening 69 minutes until The Airportmen finally made the breakthrough when Dan Cheema set up Connor Hammond to apply a good finish, and they only had to wait four minutes for another as Cheema slotted home. And in stoppage time Jack West finished well to seal another decent afternoon for the home side.

Stow bounced back from their first defeat in the league this season in midweek by thumping Southend Manor at Wadham Lodge. Callum Ibe opened the scoring after just two minutes before Dwade James netted another hat-trick in fourteen first half minutes before Emiel Aiken netted just past the half hour as the hosts led 5-0 at the break. Aiken then added another twenty minutes from time before Lewis Francis completed the scoring nine minutes from time to complete the rout and send them 2nd on goal difference and a point behind the leaders having played the same number of games.