Eating “junk food” for a living! 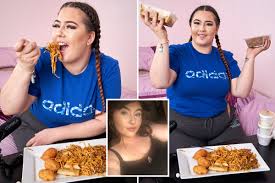 Extraordinarily 22- year old Charna Rowley from London has given up her full time job as an admin worker to pursue a career on You Tube eating food from McDonalds, Chinese takeaways, Greggs and Pizza Hut.

She films herself consuming around 5000 calories in a single sitting and up to 40,000 people tune in to watch her tuck into a meal.

This unique type of video is known as Mukbang and is a trend that originated in South Korea, where people talk to their audience while binging on food.

Charna has no plans to stop eating on camera and her “ultimate aim” is to work her way up to 10,000 calories in one go.

“I might get something stuck in my tooth or around my mouth but people love how funny I am”, she says. “I have the negative ones, telling me how fat I am, how I could be pretty if I try not to eat so much but most of the time I just don’t answer. “I enjoy it and it gives me confidence – and now that I can monetise my channel and really respond to people’s requests, it can become a full time career move.”

Charna, who weighs 16 stone, goes to the gym four times a week in order to balance out the unhealthy food she eats.

Charna posts her videos on her channel, CHARNATION  and often eats alongside her partner.

She currently makes 2 X half hour videos a week and has so far spent around £1,000 funding the footage.

I wonder if her long-term goal might be to move from wide-screen to IMAX!

Being a Tuesday I was joined in the second hour of today’s show by MARGARET MILLS, who turned her attention to a 19th century preacher from Kelvedon who was apparently able to fill halls with congregations of over 10,000 people.

Listen here to what Margaret had to say about this amazing man:-