Billericay Town were forced to postpone their National League South clash against high-flying Weymouth FC after the pitch was vandalised. Forcing entry early on Saturday morning, two vehicles were driven onto the playing surface, resulting in extensive damage. 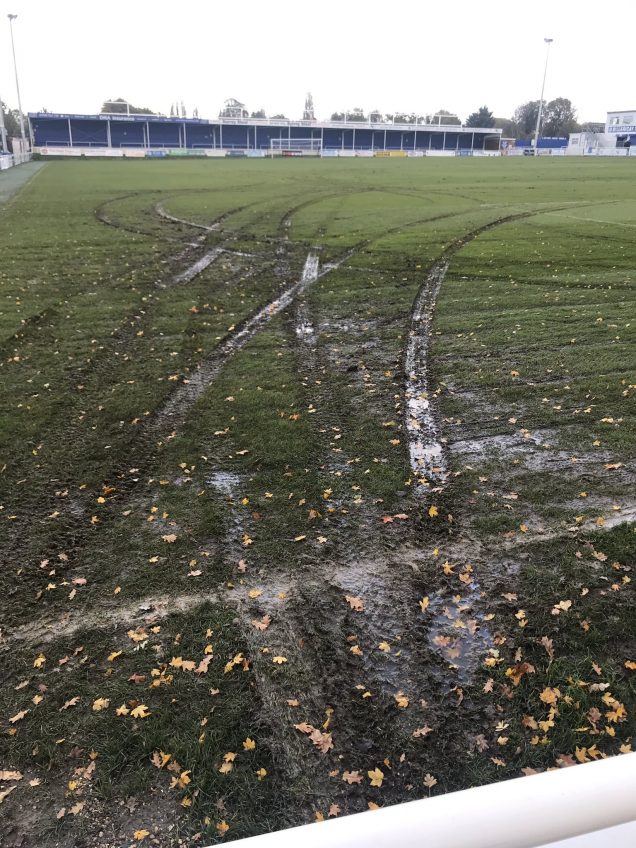 Disappointment at the damage incurred did not deter Blues fans from heading to the clubhouse to express support and enjoy a Saturday of sport on the giant screen. Manager, Jamie O’Hara, accompanied by his players were soon on hand at New Lodge to show solidarity with the fans. Off for a training session in the afternoon, it was down to “business as usual” and showing strength in the face of adversity. 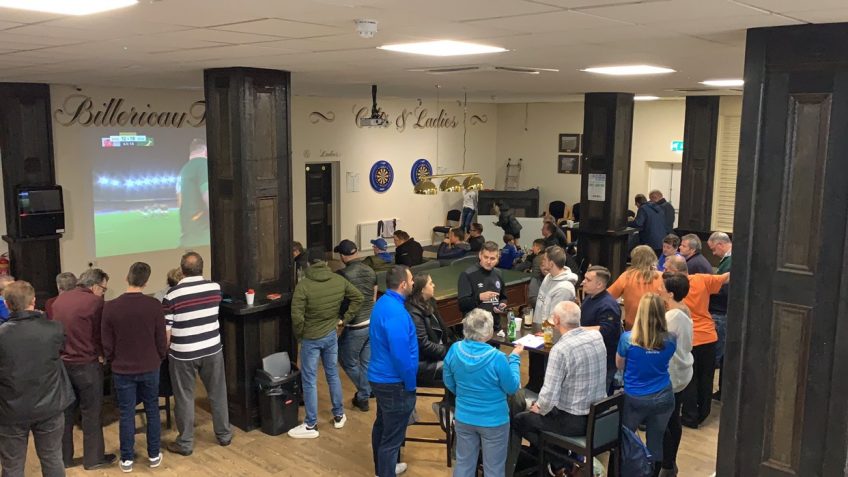 Billericay Fans Head to the clubhouse at New Lodge to show support and enjoy the rugby on the big screens.

The club released a statement in response to the damage incurred defiantly stating that, “The pitch damage will be swiftly rectified. The BTFC family is bigger than incidents of this nature.”  The mindless act, widely condemned across non-league football, brings no credit to the unknown perpetrators.With a 1st round Cup tie away at Forest Green, there is some breathing space to repair the pitch.

The next home fixture is the re-arranged game with table-toppers Wealdstone on Tuesday 12th November and a return for Blues ex-boss, Dean Brennan. A number of former players, including striker, Ross Lafayette, and midfielders, Billy Clifford and Connor Smith, will also make the trip to Essex.

Manager, Jamie O’Hara, impressive in charge of the team, has shown equal aptitude in off-field matters and immediately made his thoughts known. “We will keep going strong like we have been, every time I’m at the stadium I feel the community coming more and more together.”  Summing up what most felt, the ex-Spurs man has been something of a revelation in showing leadership skills that many might not have associated with the former Celebrity Big Brother contestant. 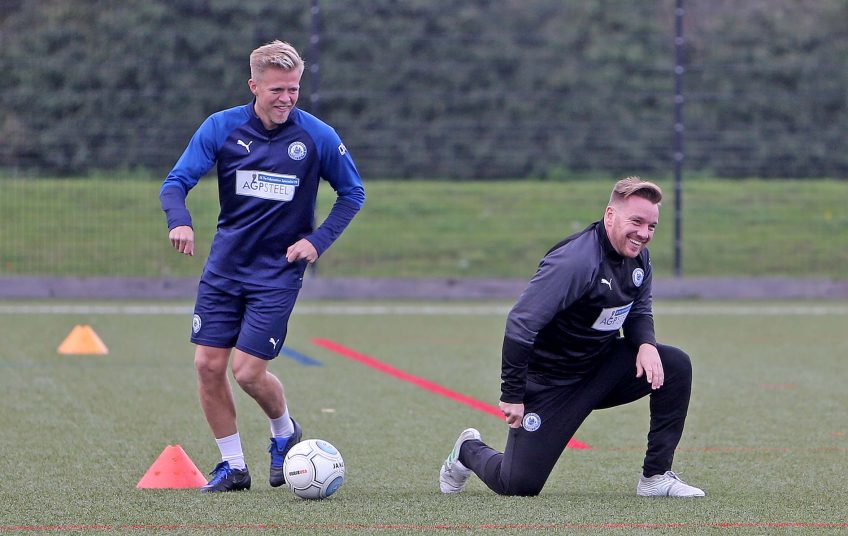 Words are important but actions matter even more. There would be no disappointment that a stylish message was backed by little substance. Leading the reaction to the morning set-back, the ex-Spurs man was immediately on the scene as he announced that he would be down the clubhouse with players, mingling with fans. At short notice, he would also lead an open training session at nearby Billericay school showing a positive response to the adversity of the situation. 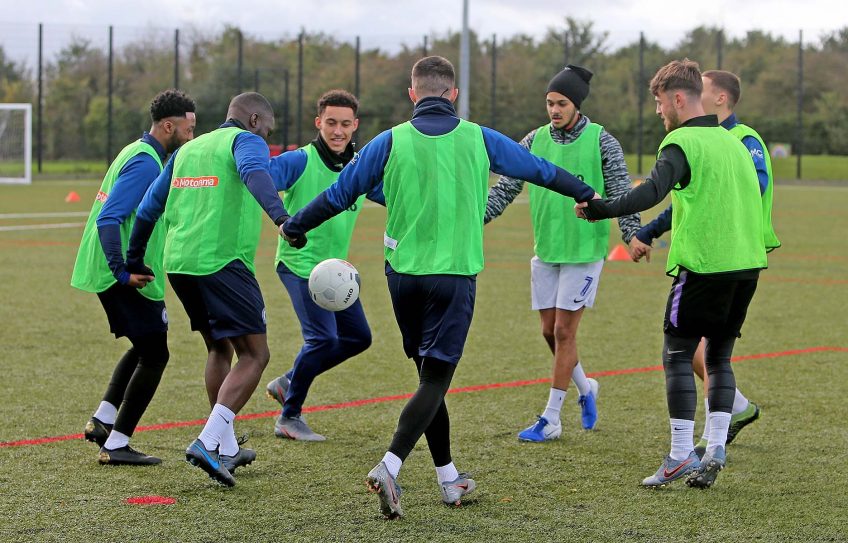 Billericay squad being put through their paces at Billericay School. Photo Courtesy: @nickyhayesphoto

At the same time, in a show of solidarity from the Billericay fans, supporters flocked to New Lodge to enjoy a day of sport in the clubhouse. Home attendances, now regularly over 1,000, have swelled the ranks of the faithful. Many came, mobilised by the prospect of the Billericay Town Supporters Society (BTSS) organising food and drink and the chance to secure tickets on one of the three coaches heading to darkest Gloucestershire in the FA Cup match next Saturday. Doors opened at 9am to screen England’s unsuccessful bid to beat South Africa to the title of Rugby World Champions.

As news broke that the match would not go ahead, it was soon decided that the clubhouse would remain open all day. With the midday Bournemouth v Manchester United match in full flow, manager and players popped in to the bar to raise morale. Concurrently, new co-owner, Greg Lake, was having a very different day to the one he had envisaged. Busy fulfilling media duties, he would update BBC Essex with a brief description of the events and provide reassurance that all was under control.

Having recently taken over ownership of Billericay Town, members of the local consortium of businessmen comprising David McCartney, Alex Morrissey, Greg Lake, and Nick Hutt, will get a first chance to fully engage with supporters at the Fan Forum on Thursday November 7th in the clubhouse.

With a mandate to ensure a stable, secure, and sustainable position for the club, there will undoubtedly be short-term measures that involve some element of budgetary reduction. For now, changes are not thought to be drastic with some players already departed.

None of the new owners are strangers to Billericay Town, with McCartney and Morrissey, through DMC Contracts, existing sponsors of the men’s side. Greg Lake, via iCore Limited, is the principal sponsor of the Ladies, and Nick Hutt is heavily involved in the coaching at Billericay Colts.

With a comprehensive background across all aspects of the club, ambitions to bring the 42 teams playing under the Billericay banner appear built on solid foundations. There may be even more sides in future if the desired pathway to the first team is realised. 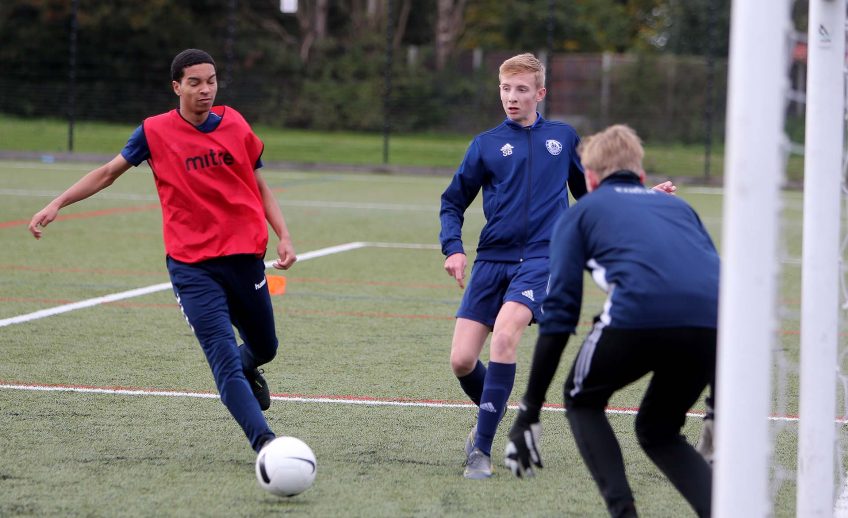 Future intentions in the long-term involve the further development of existing infrastructure, the provision of top-class training facilities, through the introduction of a new 4G pitch and Sports Centre, on the land behind New Lodge. Available for local use, the project has the potential to build a lasting club legacy for the whole community.

Talking of community, perhaps the biggest impact of the unwanted incursion on the pitch is actually a positive one. The heinous act has purely served to reinforce a sense of togetherness, belonging, and steely determination that the bullies shall not win. With statements across the internet from fans stating that “this will only make us stronger”, the consortium has secured an army of goodwill and supporters in just two weeks.

Striking at the heart of an institution, this was an attack against a whole community. As such, the aggression will only serve to galvanise local support from Blues fans determined to overcome the set-back. With a growing volunteer base in position to assist at the club, many of the challenges faced by the new owners will be shared.

Looking forward at the challenges ahead of competing in the National South, balancing budgets, securing passage past Forest Green in the FA Cup, and, over time, building on the community of Billericay’s component sides, and revolutionising infrastructure, a few tyre tracks on the pitch should prove to be nothing more than a minor irritant.