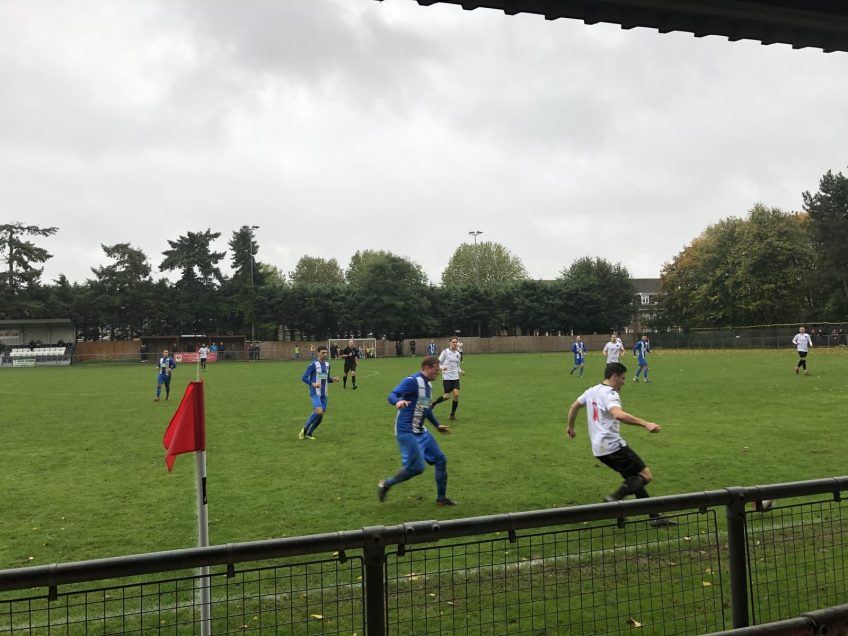 Chalk Lane played host to a real classic encounter on Saturday that saw nine goals in a real thriller. Ned Clarke handed the hosts a 4th minute leade, but David Vaughan then levelled up in the 17th minute. Two minutes later and Cockfosters were back in the driving seat via an own goal, but on the half hour Curtley McIntosh had levelled up once again. However the hosts went in at the break 3-2 up after Billy Healey rifled home. Healey scored his second in the 65th minute and it looked like job done when Ryan Wade scored from the penalty spot two minutes later. However Sporting Bengal were able to cut the deficit as Ashaan Siddik rifled home a pnelaty in the 77th minute and then converted a second penalty six minutes from time. There was to be no further scoring in a highly entertaining encounter that leaves Cockfosters sitting 10th in the table, while Sporting Bengal now on a four game losing streak sit one place below in 11th.

Jay Devereux’s men opened a four point lead at the top after a 3-1 win over strugglers Clapton. Tashan Richmond, Daniel Smith and the evergreen George Smith provided the goals, with Clapton, who now sit second from bottom, notching a consolation through Mario Gjini.

The Lilywhites upset title-chasers Saffron Walden Town after a good day at the office which started in the 40th minute when Joss Lillis handed them the lead. Jordan Halls doubled that lead in the 47th minute but Charlie Cole reduced arrears with a penalty in the 55th minute. But Cyrus Babaie then made it 3-1 to the hosts, with Lillis then adding his second to make sure of the points. Saffron Walden remain second but now four points behind leaders Hashtag after this one. Hoddesdon meanwhile are now 6th.

The Stow won on the road thanks to a Dwade James hat-trick, with each of them coming via penalties. Emiel Aiken added a fourth on the stroke of full-timem with Sadiq Akanbi notching Manor’s consolation. Stow are now 3rd, with games in hand, while Manor slip down to 17th.

Fans waited until stoppage time before there were any goals in this one, and once the hosts had broekn the deadlock the visitors then found an instant reply a minute later. Daniel Palmer looked like he had found a late winner when he found the target in the second minute of stoppage time, but the Robins levelled up a minute later through Harry Bushell which gained them their first point of the campaign. St Margaretsbury, now on a four game unbeaten run, sit 8th after this one.

Takeley’s title tilt has been seriously derailed in the last 7 days as they followed last weekend’s defeat at home to Hashtag United with a midweek defeat at Ilford; on Saturday it became three defeats on the spin as they lost 2-0 to Hadley who are now unbeaten in seven league games. Cameron Ferguson and Luke Jupp scored the goals that see the Bricks up to 5th, while Takeley drop down to 7th.

Stansted came away from the Mile End Stadium with all the spoils courtesy of goals from Billy Coyne, Luke Hirst and Ryan Ramsey. Hamlets replied via a Suaibo Blade brace and the result now sees Stansted occupying 14th in the table, one place and one point better off than Tower Hamlets.