Hashtag Grind Out Important Win Thanks To Osude Strike 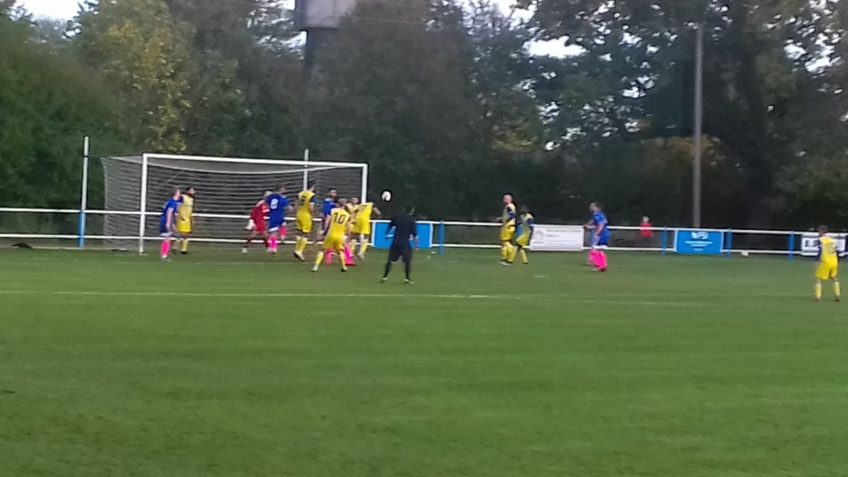 Joshua Osude came off the bench to score the winning goal as Hashtag secured a big three points away at Takeley. That victory has seen them remain at the top of the Essex Senior League, making it nine straight wins in the division. It was an entertaining match to witness and one that could have gone either way.

The game got off to a quiet start, but it was soon to kick into action as ten minutes in, Jesse Waller-Lassen had the first opportunity of the match. George Smith laid the ball off into the in-form forward who fired off target. It was a good attempt though. Two minutes later and they had another chance this time through Jack Martin. However, his attempt didn’t prove to be much of a problem for the goalkeeper.

22 minutes in and Hashtag were yet again proving to be a threat going forward and almost capitalised on a poor defensive error. Striker Smith intercepted and his deflected shot was kept out well by ‘keeper Matt Gill. It was the biggest opportunity of the match leading up to that point. Their resulting corner wasn’t as good though which was headed over by Luke Wilson.

The away side were dominated proceedings and had quite a few good chances however they were yet to find the back of the net. Takeley meanwhile barely had a sniff on goal and were yet to have an attempt. Harry Honesty almost made it 1-0 to Hashtag after Gill made an error leaving the goal empty. Honesty had the ball, but his shot was dragged wide, failing to capitalise.

Just before the end of the half, some great footwork on the near side of the Takeley area by Waller-Lassen put him through but his shot wasn’t as good though. That was the last action of the first half as it was goalless at half time. It was a good half and was quite a scrappy match with Hashtag being the better side but were yet to make the breakthrough.

Three minutes after the restart and Hashtag again continued their dominance. This time, Samraj Gill won the ball back off Mike Castle in a dangerous place and his shot was caught by Gill. Two minutes after, a rare chance came to Takeley through Glen O’Hanlon, but his curled effort was off target.

With ten minutes played of the second half, Hashtag had a huge chance to take the lead. George Smith played a superb ball to Waller-Lassen in the middle who came extremely close to making it 1-0. His shot came back off the crossbar and was an opportunity missed to get in front. Moments later, they were back at it yet again with substitute Joshua Osude’s blistering pace coming into play as he crossed to Smith where his attempt was saved well by Gill. It was soon palmed back out to Ross Gleed who shot wide.

Halfway through the second half and George Smith found his attempt blocked. However, with 20 minutes to go, Hashtag made the breakthrough at last. Waller-Lassen played the ball into the path of Osude, who sprinted towards goal and fired the ball home for 1-0. That goal was the wingers first goal for the club and most likely a winning goal. It was deserved for the away side considering their dominance.

With Hashtag finally in front, it was likely they would sit back and hold onto to their slender advantage. With nine minutes left of normal time, an attempt by Mitchell Das was intercepted by a Hashtag man and a vital one too. If it weren’t for the tackle, then Hashtag may well have conceded. Moments after, the home side somehow didn’t make it 1-1. The corner was taken by Das where Bryn Thorpe jumped the highest out of everyone and his header went wide. A huge chance to level but it wasn’t Takeley’s day in front of goal.

Hashtag held out for what could be a crucial three points at the summit of the Essex Senior League. They remain at the top and a point ahead of Saffron Walden. Takeley are in fifth but are good enough to catch up to the runaway top two further on in the campaign. It was a very entertaining game to watch and the performance Hashtag put in were the type of results that can win leagues. They are certainly shaping up to become a force in the ESL this season.