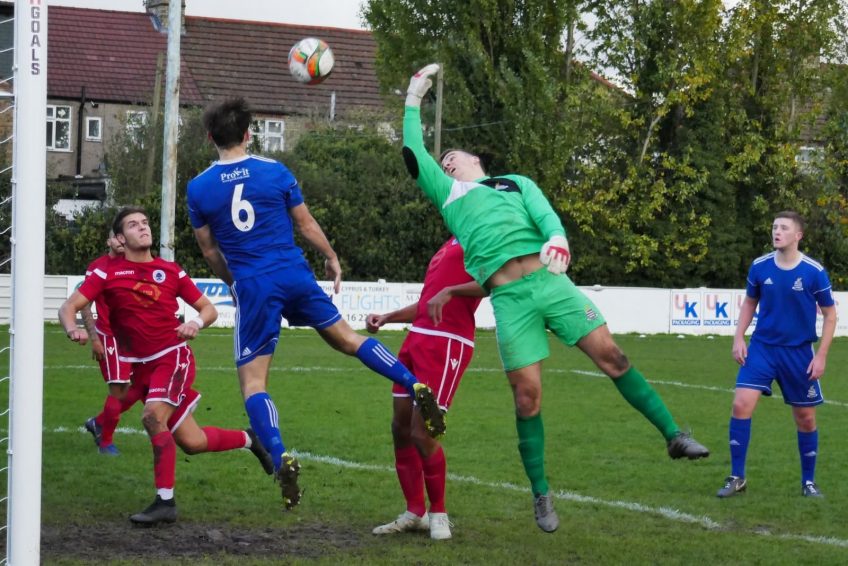 The Woods secured all the points as Sawbridgeworth Town made the short trip to Harlow only to end up empty handed. Lauric Diakiesse scored twice in the first half, then completed his hat-trick in the 82nd minute. Harry Bushell nothced the Sawbridgeworth reply but defeat sees them rooted to the foot of the table with no pints from their opening eleven games. Woodford meanwhile are 7th after this win.

The E’s made it two league wins in a row after a solitary Daniel Chambers goal was enough to give them all the points against Southend Manor. Chambers opened the scoring in the 6th minute and the hosts almost doubled that lead two minutes before the break when Joseph Pattison had a shot tipped onto the crossbar by Joshua blackburn; and before the the hlaf was done Enfield were again denied, as Michael Salako had a shot tipped round the post by Joshua, then the resulting corner saw a Joshua Sykes header rattle the crossbar. The hosts spurned a chance to double their lead in the second half when Sykes headed a Ben Bradbury free kick down to Daniel Chambers but he could only blaze his shot over the crossbar. As it ended in 1-0 victory meant that Enfield were not made to rue their missed chances and the win sees them end the day in 14th, two places and one point better off than Southend Manor who have now lost twice on the trot.

Hadley took all the points thanks to an Alfie Bartram penalty on the hour. The hosts had hit the cross bar shortly before taking the lead, and ended up having a player sin-binned shorlty after taking the lead. However Luke Ward had to pull of a good save to deny Hoddesdon an equaliser and they now sit 6th, while Hoddesdon slip to 8th.

The Bloods remain 2nd after a 2-0 win against Cockfosters with the goals coming via an own goal three minutes before the break; and then that lead was doubled three minutes after it when Ryan Fleming notched to make sure his side keep the pressure on leaders Hashtag United. Cockfosters end the day occupying 11th spot.

Last weekend’s 5-1 win in the Vase may have given the Airportmen the stirrup they needed as they followed that up with another fine afternoon at Hargrave Park. Sporting Bengal United provided the opposition and were swept aside as the hosts scored three times in the first half via Dan Cheema, John Clark and Jack Mitchell. Luke Hirst wrapped up the scoring just before the hour and George Marsh and his defence kept a clean sheet at the other end to make the victory even sweeter. Stansted are now 15th , while Bengal have now lost three league games on the bounce and as a result have dropped down to 9th.

Hashtag United remain top of the table after a hard fought win at Takeley. A cagey opening 45 minutes saw neither side really impose their will, however the visitors went on to have the lion share of the possession in the second half, with Jesse Waller-Lassen hitting the cross bar in the 56th minute. However the leaders finally broke the deadlock in the 72nd minute when Waller-Lassen threaded a ball through to Joshua Osude, who then went on to stroke the ball past Matt Gill to secure all the spoils. Hashtag remain at the top, leading by a solitary point over Saffron Walden. Takeley meanwhile slip down one posiiton to 5th.

Tower Hamlets made it two wins on the bounce after they won their local derby against Clapton thanks in part to an own goal. Marcus Castano supplied the other goal while Kevin Manuel kept a clean sheet to make it a good day at the office for the Mile End side who are now up to 13th. The Tons meanwhile are down in 17th.

The Stow are keeping their hand in at the top after a hard-fought win against Redbridge. Dwade James opened the scoring via a 9th minute penalty. But Redbridge found an instant equaliser as they were awarded a penalty of their own a minute later which Daniel Gilchrist despatched. The winner came ten minutes from time as a corner swung in with Ben Crillet getting the final touch. Stow are now 4th, but have games in hand over the teams above them, while Redbridge are down in 10th.

Jack Coker and Dan Martin both kept clean sheets as the game at Mayesbrook Park ended in a goalless draw. As a result it means that West Essex remain 3rd but have lost some ground on the top two. St Margaretsbury meanwhile now occupy 12th spot.