All the fun of the fair!


I’m usually very careful not to engage in comments touching on political or religious beliefs, but I did feel that recent events did warrant some reaction.

Now call me old fashioned if you will, but to my mind churches ought to be places for silent reflection, so I’m not really sure that they should be used as areas for the likes of fairground entertainment.

Can you imagine the Jewish or Muslim communities, for example allowing synagogues or mosques to be used for such purposes?

Nevertheless apparently it’s OK for Anglican churches to go down this route.

First off ROCHESTER CATHEDRAL installed a 9-hole Crazy Golf course along the length of the nave and now Norwich Cathedral has installed a 55-foot tall heater skelter complete with a 40 ft high viewing platform with rides priced at £2 a go! 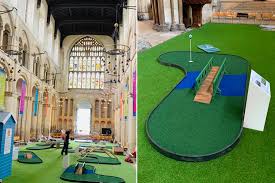 The thought behind this installation is supposedly to allow visitors a better view of the medieval roof carvings and decorations. 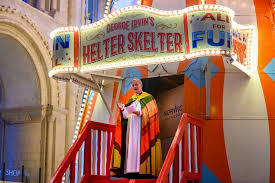 Well that’s as maybe but what on earth were the people who organised a somewhat risqué fashion show involving models exposing generous amounts of flesh at Southwark Cathedral, thinking about?

Whilst St Andrews in Holborn hosted an event at which models dressed in Satanic costumes disported themselves around the church.

To my mind that’s just bizarre and possibly sacrilegious.

Perhaps they were simply trying to expose their “ALTER EGO”.

Maybe next up we might have a coconut shy set up on on the alter, beer on tap in the vestry and a display of unfrocked clergymen engaged in lap dancing along the pews! 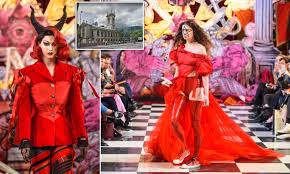 What on earth is the world coming to?

Coming back down to the real world, in the second hour of today’s programme, Margaret Mills took us over to Thaxted and notably CLARENCE HOUSE but not the one where CHARLES and CAMILLA reside.

Listen again here to what Margaret told me this afternoon:-