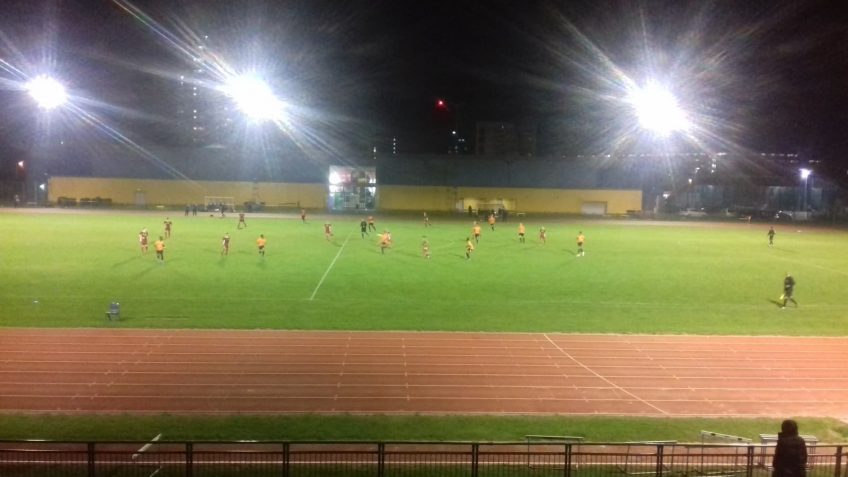 A Bryn Thorpe hat-trick saw Takeley turn an early deficit into a 4-1 win over Tower Hamlets that sees them continue their good opening form that puts them firmly-placed amongst the league’s early pace setters.

Tower Hamlets may be swimming in more relegation-infected waters, but the young team they have representing them does contain some good players and they certainly came out the blocks in rampant mood as Samuel Mayuma twice tried to feed Suaibo Balde in the opening two minutes, both times thwarted by solid Matt Hurley interceptions.

However Hamlets took the lead in the 5th minute as a well worked move ended with Yoan Edoukou firing a shot from the right hand side of the box into the bottom left hand corner of the net.

Takeley did win a corner in the 9th minute which didn’t really threaten the hosts, whose defence cleared it and a long ball over the top that was aimed at Thorpe was scooped up easily by the keeper.

Hamlets continued to press, with another good chance coming through Mayuma who held the ball up, before freeing Joshua Rusoke who went on to have a shot blocked by Matt Hill.

Bryn Thorpe moved forward threateningly on the quarter hour, placing a cross in from the right, but Ryan Murad cut that one out and then did the same when Tom Jelliman fired a free kick in and then Matt Hurley played a long ball into the box which Kevin Manuel easily caught. Another Takeley free kick in the 22nd minute was headed clear by Ali Omar. It was a spell of dominance from the visitors that didn’t really test the hosts too unduly who stood firm and cleared any balls that came near their goal.

Coby Miles managed to carve out the best Takeley chance of the half when he tore down the left flank and placed a delightful ball across Hamlets goal, but Thorpe failed to make a solid connection at the back post. Hamlets then launched another forward foray which saw Matt Gill having to get down and win the ball in a one-to-one with Balde.

But in the 28th minute Takeley were level as a ball through the middle found Thorpe who drilled his shot past manuel. Then two minutes later a Takeley free kick was headed past his own keeper by Alan Zuqolli.

The visitors did manage to extend their lead in the 38th minute when Thorpe picked up a loose ball just outside the box, before turning and firing a shot past the Hamlets keeper.

Balde took matters into his own hands in the 44th minute, taking on a number of Takeley players before being halted, however Folkes managed to keep the move going and put over a cross towards Rusoke that La Ronde headed towards his own keeper.

Balde had an early chance in second half that Takeley managed to scoop clear, then at the other end Mitchell Das, who came of the subs bench at the start of the period, placed a ball into the path of Mayuma who then fired a low shot that Manuel saved.

Thorpe had a long range effort dart over the cross bar as he looked to complete his hat-trick; in the 55th minute he duly did so as a ball from the right swept across the six-yard box and he slide in to put the ball into the net.

Hamlets have a young side and their heads did not drop, continuing to try and get balls into the Takeley box and on the hour a ball to Mayuma was fired beyond the keeper to cut the deficit.

Hamlets won a corner in their next attack as Balde had an effort deflected, and the hosts also had a free kick that the Takele defence needed two attempts to clear from the danger zone. And Murad delivered a nice ball to Ezra Ndukuba whose cross was cut out by Gill. At the other end Das had a run halted by Murad while a George Powell shot in the 71st minute was skied high of the target.

Thorpe looked to add another goal in the 76th minute with a diving header after an inch perfect cross from Nickey Barrett, however Manuel was equal to it and tipped the ball around the post. From the resulting corner Hamlets launched a counter-attack that saw Rusoke have a powerful shot cleared by Powell inside the six-yard box.

Hamlets kept pressing as the game came into the final ten minutes, winning a brace of corners, with Ndukuba going close after the second one was cleared outside the box, but it fell kindly to him and he thumped his shot straight back, although it sailed over the bar. And Ndukuba beat his marker and got a cross over from the byline that won another corner in the 84th minute. Commendable stuff from the hosts, but Takeley were not going to have the points snatched from them, placing bodies behind the ball at times and winding down the clock.

Hamlets’s young team is a work in progress, and they certainly had Takeley under the cosh in the opening stages of the game. But Takeley put in a solid shift that keeps them battling at the top end of the table, while Hamlets are circling around the relegation zone.