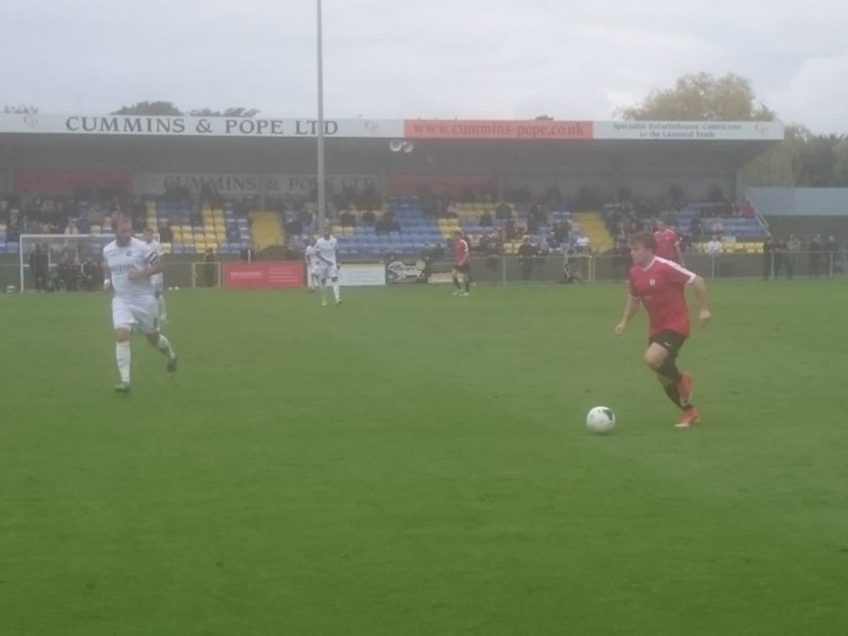 Hadley put in a very good performance, but second half strikes from Jonah Ayunga, Alfie Rutherford and Ryan Seager saw Havant & Waterlooville take their place in the Fourth Qualifying Round of the Emirates FA Cup. Hadley frustrated their Vanarama National South opponents as the first half ended goalless, but just four minutes into the second period the Hawks broke through as a loose ball fell to Ayunga and he powered an effort in off a defender and Hadley’s resistance had been broken. It was quickly two in the 55th minute when a lovely ball clipped towards the back post found Rutherford totally unmarked from a yard out and he couldn’t miss as he headed home, and with nine minutes remaining Havant added a third as a header back across goal was rammed home by Seager, and they were now well and truly on the way to the next round. Hadley though did themselves and the league proud in this one.

Ceykan Karagozlu netted four as Fosters hit seven at Chalk Lane against Clapton. Reuben Campbell put the hosts ahead just before the quarter hour mark but Mario Gjini levelled two minutes later, but Billy Healy then restored the hosts lead just past the half hour mark before Karagozlu netted his first two minutes later to increase that lead. And it was four with five minutes of the half remaining as Karagozlu added his second, before netting twice more on 54 and 57 minutes to make it 6-1. Francesco Cicconi netted a 67th minute penalty for Clapton to make it 6-2, but Harley Haag added a seventh in stoppage time to cap a fine afternoon for the hosts.

Josh Sykes came off the bench to net a six-minute hat-trick as ten-man Enfield thrashed bottom side Sawbridgeworth Town at The Prokit UK Stadium. The build up was dominated by the inclusion of Stortford striker Jamie Cureton in the hosts ranks for this bottom two clash, but he didn’t last long after being sent off in the tenth minute. Olly Miles though put the hosts ahead ten minutes after this but Sawbo fought back as late first half goals from Evaristo Kitoko and Angus Poole saw the visitors lead at the break. It stayed that way until eleven minutes from time when Sykes netted his six-minute treble, and the hosts then added a late fifth through an Alfie Mason penalty to cap an incredible finale to this contest.

Isaac Marfo-Jacobs netted a 92nd minute leveller as Hoddesdon Town snatched a point at the death against local rivals St Margaretsbury. The hosts flew out of the traps and saw goals from Jordan Halls and Jack Lee have them two up in seven minutes, and although Daniel Palmer pulled one back on the half hour, Marfo-Jacobs netted ten minutes before the break to lead 3-1 at half time. The visitors though turned it around as Kyle Roberts netted a hat-trick in 21 minutes, one a penalty, to lead 4-3 with twenty minutes left, but Marfo-Jacobs netted in stoppage time to see this local derby end all square.

Leaders Walden recorded another win as they saw off Ilford at Catons Lane. After a goalless opening half, the hosts broke the deadlock just before the hour mark through Jack Leachman before a Charlie Cole brace sealed the points for the home side.

The Motormen took all three points as they got the better of Southend Manor at Southchurch Park. Taylor Tombides put the visitors ahead nine minutes before the break before Dean Hall added a second a minute before the break which proved enough for Micky Wetherall’s men to take victory.

Symeon Taylor netted a brace as West Essex took all three points at Mile End against Sporting Bengal United. Curtley McIntosh had put the hosts into a tenth minute lead but Taylor netted a leveller just two minutes later as the sides went into the break at 1-1. Brad Russell then put the visitors ahead midway through the second period, before Michael Mignot and then Taylor netted to see them into a 4-1 lead with fifteen minutes remaining. Steve Carvell pulled one back with five minutes left, but it was too little too late as West took the points.

Hashtag are back into second on goal difference after they took all three points at Hargrave Park against Stansted. Jesse Waller-Lassen opened the scoring on the half hour mark, and he was on hand again to double their lead four minutes into the second half, proving enough for them to take the win.