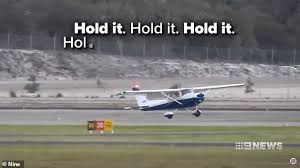 We started today by looking at the man, of whom I think it can be fairly said, that he will never forget his first flying lesson.

Yes, 29-year old Max Sylvester was enjoying a flying lesson  when just over an hour into the flight, the instructor passed out.

In the Audio of the incident, he can be heard telling ground control that the instructor is leaning over his shoulder and that he keeps falling down!

The controller then asks:  “Do you know how to operate the  aeroplane?”

To which Sylvester replies:  “This is my first lesson.”

Over the next 62 minutes the controller promises to help the pupil get back on “terra firma” telling him that he’s doing very well to which Max replied, “Well, my flight instructor did say I was the best student he’d had.”

Eventually Sylvester landed the plane safely at JANDAKOT AIRPORT in Western Australia claiming that the homework he’d put into his studies had got him through the ordeal.

The instructor has been taken to hospital in a serious but stable condition.

Keeping to a flying theme, Margaret Mills took as her subject today the North Weald Bassett flying field which, of course came to the fore during the course of the second world war.

Listen again here to what Margaret told me today:-