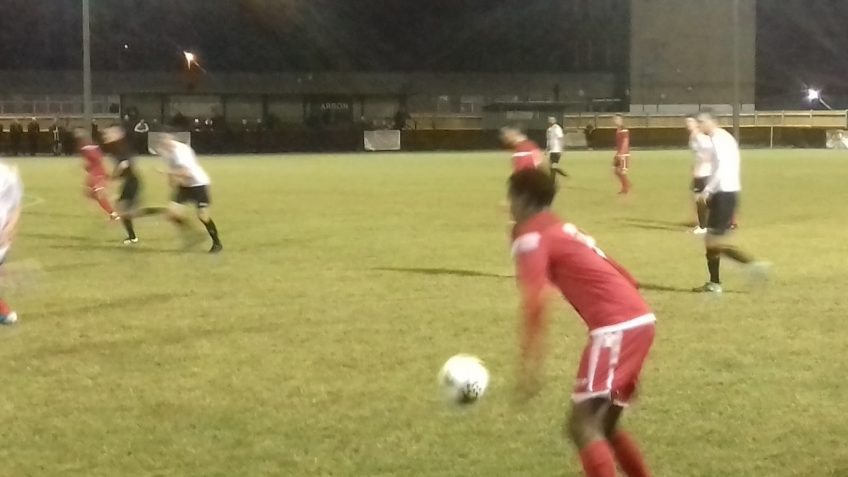 Walthamstow’s FA Cup run came to an end at Addlestone Moor as the hosts managed to come back from an early goal to finally win what had been a compelling cup tie.

Stow made a perfect start to the reply when they were handed the lead in the 7th minute as Callum Ibe was played in and he dinked the ball over Liam Stone.

The hosts immediately launched an attack from the re-start but Murphy not only cleared but the ball traversed the length of the pitch, reaching Ibe who then fired a shot wide.

The hosts then came close to equalising but James Bransgrove made two fine saves; the first saw him parrying an Alex Hendrie header, then the Stow keeper tipped away a Marcus Cousins poke. The Stow defence, marshalled by captain Vinny Murphy then closing ranks which meant the hosts had to wait until the 20th minute before they had another clear opportunity when Adam Roberts having a shot deflected away for a corner, which when it was taken swept across the Stow box until Bransgrove punched the ball away.

Murphy had a free kick pushed around the post by Stone, then Dwade James headed a ball into the path of Billy Jones whose effort took a deflection and won Walthamstow a corner.

But Rangers returned fire with a long-range howitzer from Dennis Gorman that wasn’t too far away.

However the hosts were back on terms in the 39th minute when a free kick from the right was met by a Cousins header that beat Bransgrove.

Stow however ended the half in buoyant fashion winning two quick corners in quickj session, the second of which was headed narrowly wide by Ben Crilley. The right on the stroke of the opening stanza Jack Folan had an effort saved by Stone, with Ibe having a second bite which was cleared off the line.

Ibe went on to have the opening chance of the second period, hitting a shot that beat Stone on route to rattling the crossbar.

However the hosts then re-grouped and started to tear into their visitors with Bradley Sweeney having a shot parried by Bransgrove who soon afterwards had to scoop up a cross-shot from Elliott Firth.

The hosts then were awarded a penalty in the 59th minute after a corner ball saw an Abbey player downed in the box from a feet-high challenge. Up stepped Sweeney who powered his spot kick into the net to hand his side a 2-1 lead.

Both teams knew that each other carried a threat, meaning that Rangers did not sit on their laurels as Roberts tried his luck with a long-ranger that was parried by Bransgrove before being hooked clear.

The hosts did start having more possession without really testing Bransgrove, while at the other end Murphy placed a header wide in the 69th minute then ten minutes from time saw James rifle a shot over the bar.

The host were then gifted a golden opportunity after Murphy could only slice a clearnace which fell kindly to Jamie Hoppitt which Bransgrove kept out.

The hosts saw Sweeney place a cross across the Stow box, which was cleared, and then the same homester won a corner after a shot was delefected behind. Then Firth moved into the box but Bransgrove showed bravey and prowess to win that one-on-one, effectively keeping Stow in the tie as long as they found an equaliser in stoppage time.

However there was still some defencise work to do as Murphy cut out a Roberts shot, with Sweeney having a go at the rebound that Bransgove again saved.

It meant that when Stow won a late corner they were still in a position to level the tie up. Bransgrove even charged up the pitch to stand in the Rangers box, but the final corner was unable to pick out a Stow player and was cleared well away from the penalty box. Stow did not have time to pick up the loose ball and launch another last-ditch attack as the referee called time on the game and with it Walthamstow’s journey in this season’s FA Cup.