Billericay edged past neighbours Basildon United courtesy of a second half Jordan Parkes free kick. The Blues were made to fight all the way by well-organised visitors that belied their lower status in the League pyramid. The single goal victory secured Blues passage to the third Qualifying Round of the FA Cup and a much-needed prize money windfall.

It had been a momentous week of upheaval for Billericay fans. Absent from the Oxford City match last week-end, manager Harry Wheeler’s departure was announced to nobody’s surprise at the start of the week. Hardly had the dust settled, then the club was rocked by something of a bombshell as news broke that owner, and chief benefactor, Glenn Tamplin, had decided to bring his three-year tenor to an abrupt end by relinquishing ownership.

With no alternative owner announced, uncertainty reigned as many pondered the implications of Tamplin’s departure on financial stability. A club statement late last Friday provides some hope, indicating that “discussions with local businessmen” were “progressing positively”. Clearly, much remains private, and rightly so, during what may prove to be delicate and financially complex negotiations. Although no debt levels have been disclosed, budget cuts are expected to be taken forward quickly to speed the route to sustainability.

The visit of Basildon, and first wave of Cup fever for the season, provided a welcome chance for Billericay fans to focus on the football. Asked to show their support at a difficult time, the town rallied around its team as supporters came down to the New Lodge in their droves. With a ringing endorsement of their new hero, the crowd raised its voice to acclaim recently appointed manager, Jamie O’Hara. A celebrity with staying power, the ex-Spurs star had pleasantly surprised many with his dedication to the cause in Billericay’s hour of need. 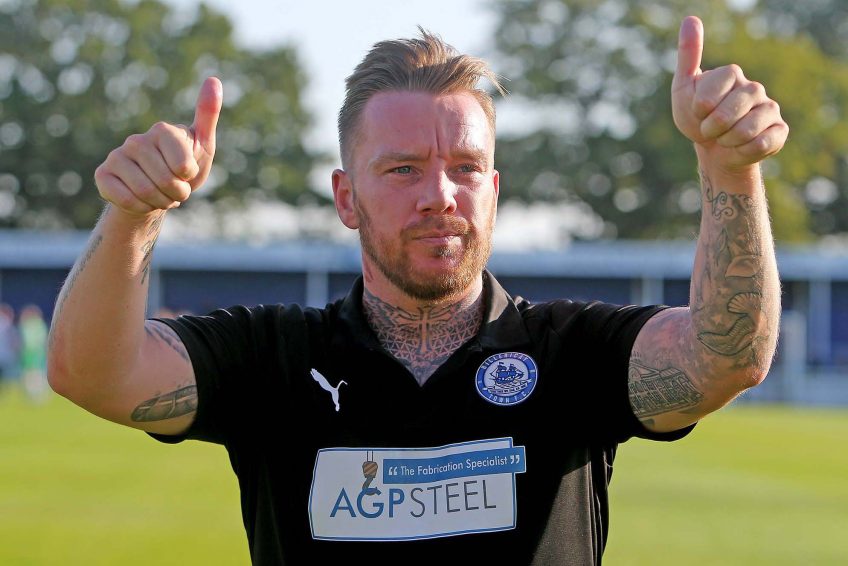 That commitment would go beyond O’Hara’s positive interviews on “Talk Radio”, affirming that he would take on the manager’s role. Perhaps more pertinently, out of the spotlight, his tasks would also include the less glamorous duties working out team line-up’s and formulating alternative plans into the early hours as players departed. The arrival of former Spurs U-23, Jamie Reynolds, to fill the left-back berth, bore the stamp of his handiwork.

Despite Billericay’s difficulties, the Bees, sitting 17th in the Isthmian North, were firm underdogs in the 38th meeting between the two clubs since that first match-up in 1971. With wins in earlier rounds against Eastern Counties Division One North, Framlingham, and divisional rivals, Coggleshall Town, Basildon had more than earned their shot at the National South side.  Manager, John Sussex, in situ since March 2019, brought a team with many pre-season signings, a number drawn from his time at Tilbury U-23’s and Witham Town.

The Blues started strongly with midfielder Sam Deering immediately releasing striker, Jake Robinson, with an exquisite through ball. Bearing down into the penalty area, his shot was blocked by visiting centre-back, Joe Turpin. This was to prove a recurrent theme during the course of the game as the ex-Tilbury man proved to be a colossus in the Bees defence over the course of the afternoon using his excellent positional sense to frequently stem attacks.

Talk before the game had been of the family contest between home midfielder, Jack Paxman, and his younger brother. It was not to be as Basildon’s left winger, Joe Paxman, remained on the bench for the duration of the match due to injury.

With one man’s misfortune came another’s chance to shine. Former Clapton winger, Jeffrey Cobblah came into the reckoning and justified his manager’s trust. Embarking on a number of mazy runs, he fully tested right-back, Ben Nunn, and was the Bees’ best attacking supply line.

Billericay had two opportunities in the opening 20 minutes, with the first ruled out by the linesman’s flag. Robinson’s skilful dink home was to no avail after Loft’s strike was palmed back to him in the six-yard box.

The striker’s next chance came after a rapid counter involving Laurent and Ramsay. Receiving a Deering pass on the penalty spot, his effort could only find Clarke Bogard who reacted swiftly to smother well.

On 25 minutes, Blues centre-back, Ronnie Henry went down injured and had to be replaced by striker Moses Emmanuel. This forced a defensive reorganisation as the back three was transformed into a back four. 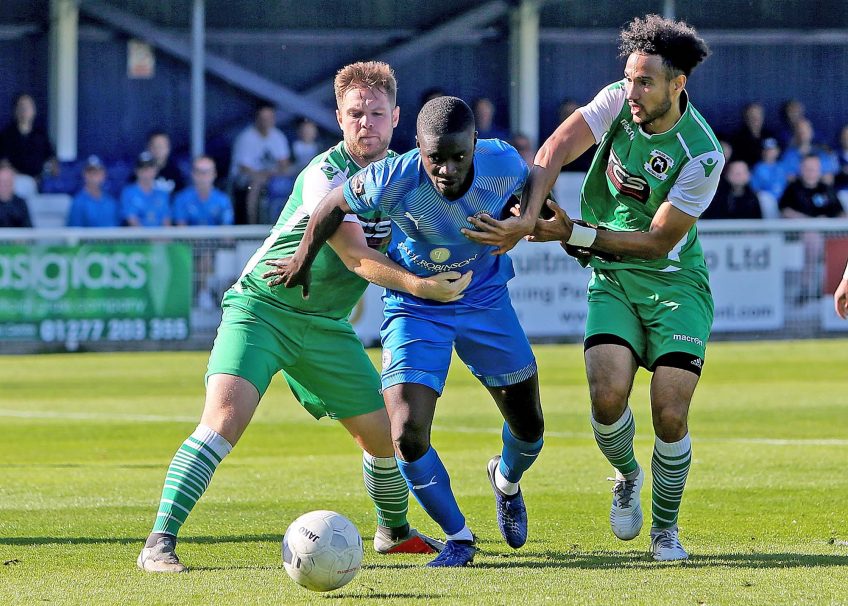 With centre-back’s in short supply after Wassmer’s loan departure, midfielder Loft dropped back to partner Craig Robson in an unfamiliar pairing. Not necessarily convincing at the back after the change, Billericay were fortunate that the visitors lacked the necessary fire-power to trouble them more than they actually did.

Basildon’s attacking strategy lent heavily on the work and commitment of Adam Vyse, who was tasked with leading the line. A surging Cobblah run down the left side brought the free kick that led to the first Basildon chance. With Vyse asserting himself in the air, his flick on from the set piece was diverted to ex-Billericay centre-back, Gabriel Adelowo, who headed just wide.

Shortly after, Vyse had an opportunity of his own on 36 minutes as his persistence took him past Billericay’s Robson and Loft. With a clear sight of goal, his left foot shot was weak and Billericay goalkeeper, Alan Julian, was able to save. The half ended with Turpin once more on hand as he first deflected a Robinson shot wide and then blocked another effort.

Basildon started the second period positively as Cobblah sought to profit from a shaky Billericay defence. First, a run past Nunn and Deering saw a cross just evade Vyse. Moments later, another push forward by the winger ended with a centre that Tom Anderson almost converted at the far post. The same player headed over on 50 minutes although the offside flag would have saved the Blues if it had hit the target.

With Basildon well-organised, maintaining a compact shape, and seeking to counter where possible via the flanks, Billericay found the match to be considerably harder to negotiate than had been envisaged. Home chances proved to be at a premium with Nathan Okoye a physical presence patrolling midfield and snapping into tackles to hold the Blues at bay.

Deering sought to find a way through with a 62nd minute shot that Bogard parried away for Adelowo to clear. Minutes later, a looping Robson header, from a Nunn diagonal, fell just over the bar. Clearly not impressed with the lack of progress against a side two Leagues below his own, O’Hara had seen enough on 65 minutes to bring himself on in a bid to influence proceedings. 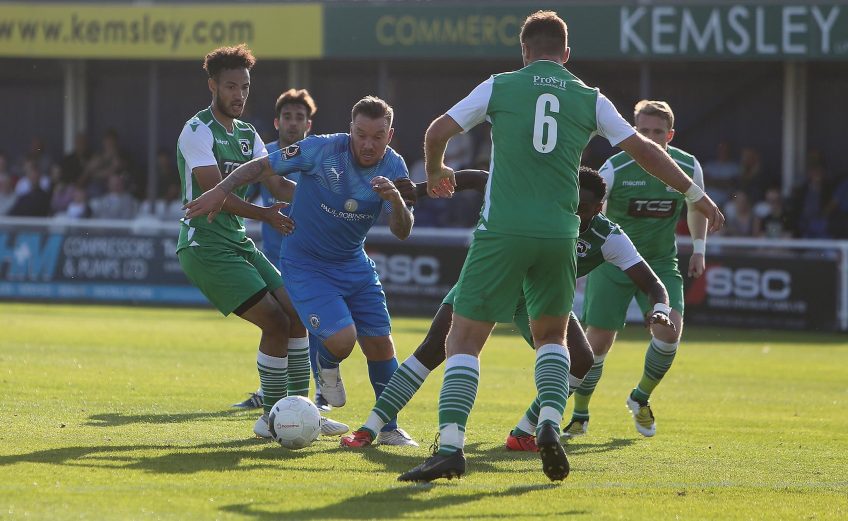 Jamie O’Hara on the ball for Billericay as Turpin and Okoye look on. Courtesy: @nickyhayesphoto

It wasn’t meant to be like this thought the Billericay faithful. As it turned out, one of the best decisions of the afternoon was to enter Jordan Parkes at half-time for Ramsay. More direct, and heavily involved in Billericay’s best offensive efforts, the ex-Hemel midfielder broke the deadlock on 67 minutes.  His fine 25-yard free kick was curled expertly into the top corner. Dipping over the wall, the well-executed set piece gave Bogard no chance. 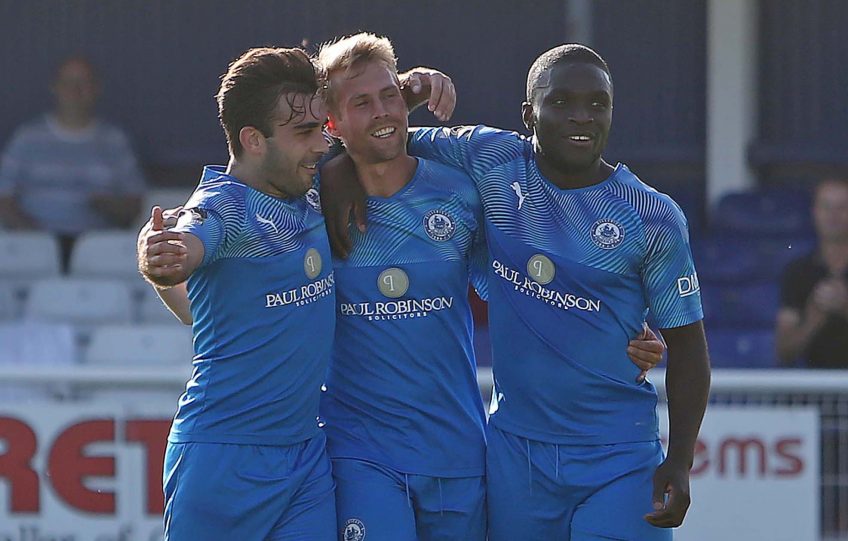 With O’Hara’s presence lending extra urgency to the team, momentum was visibly increased. A short corner routine led to a curling Paxman shot destined for the top corner only to be headed clear in extremis by a defender on the line. Robinson went even closer on 82 minutes as he combined with Emmanuel, cut inside Conor Mead, and hit a low shot that wrong-footed the Basildon defence but struck the near post and flew out to safety.

With no further action besides a high foot from Adelowo on Emmanuel that earned the only yellow card of the game, Basildon can count themselves unlucky not to have managed to take their higher ranked neighbours to a replay.

Separated only by a moment of quality, worthy of winning any game, the Bees were never overawed by the occasion and gave an account of themselves of which they can be proud. With mixed League form yielding just one win, albeit a very convincing 6-0 triumph over Romford, the team can take great confidence from a display that included a number of fine individual performances.

Billericay will gratefully accept the narrow victory and the £6,750 prize money. With no training undertaken last week due to events off the field, and much uncertainty gripping the club, winning the game rather than the quality of the display is what mattered.

It was a day of unity when Billericay came together to support its team and show that the issues we have will be faced together. Whatever happens in the coming weeks, Billericay Town will need the support and faith of all its fans. Saturday’s attendance provided a powerful sign that the sense of community at the club has been transmitted to the town as a whole.