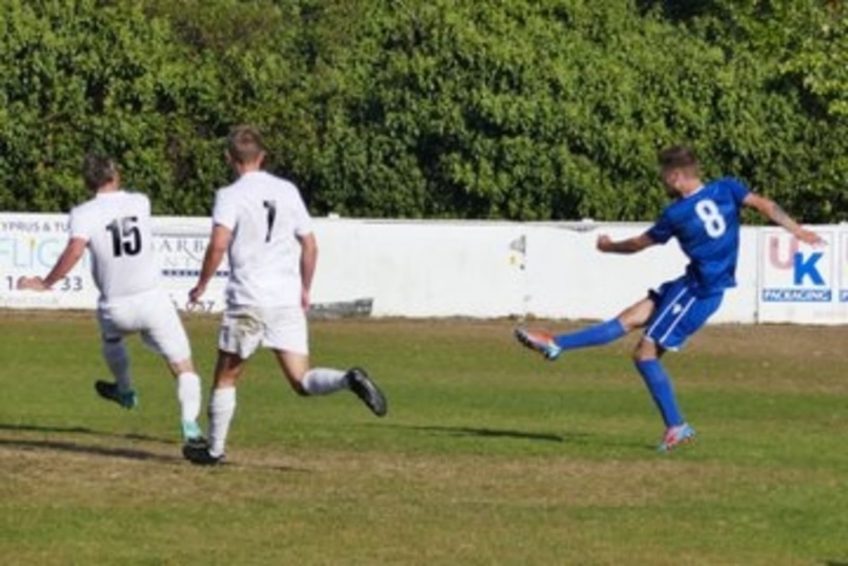 Walthamstow and Abbey Rangers will have to go at it again in midweek after their game on Saturday ended in a 1-1 draw. Marcus Cousins’ first half effort was cancelled out by a sensational strike from Billy Jones in the second half in an FA Cup encounter that was compelling, exciting, enthralling and enjoyable. When the national newspapers bemoan the death of the FA Cup those in attendance for this particular game will be able to tell them something different as both teams went at each other and wanted to win it.

Both clubs play at Step 5 of the National League System and had both beaten clubs higher up the Pyramid in previous rounds. It meant an even game was on the cards; and that is exactly what the 245 spectators present at Wadham Lodge, along with those watching the action on BT Sport, were served up.

It was to be a tentative start as both teams tested each other out with the visitors having their first chance in the 8th minute when a cross was headed over the bar by Jamie Hoppit. Callum Ibe, who opened his scroing account for Stow in the midweek win over Ilford, almost latched onto a ball over the top, but Liam Stone managed to get to the ball first and smoother it, then the visiting keeper blocked a Danny McCullock shot. James Bransgrove’s first piece of work was to cut out a deep cross from Tim Pitt.

Stow’s defence had a momentary lapse of concentration in the 14th minute when a ball across their box was not dealt with and they were punished for this by Cousins who sneaked in and slotted the ball past Bransgrove to give his side the lead.

Good link up play between Adam Roberts and Cousins won Abbey Rangers a corner in the 24th minute which ended up being dinked over the cross bar by Liam Collins. At this point the visitors were keeping Stow very quiet whilst trying to build on their lead. However Stow were able to have an effort of sorts when a speculative up and under of a ball was headed goalwards by Sammi Gebrai but Stone was well positioned to make an easy catch.

Stow almost found an equaliser when a Vinny Murphy free kick was tipped around the post by Stone, with the resulting corner being placed narrowly wide by Gus Douglas. But just when it looked like the hosts were starting to get some attacks together, the visitors then went straight up the other end and almost doubled their lead as a long range grasscutter from Harry Bishop was a mere inch the wrong side of Bransgrove’s right-hand post.

And the Combined Counties League outfit saw out the half in command as a ball played into the box found Roberts who attempted to thread it onto Hoppitt, but Stow’s defence crowded him out, and then Bransgrove had to punch clear a deep cross deep as the visitors closed the half in dominant fashion.

Stow had been a bit subdued in the first period, and no doubt Ryan Maxwell may have had a few choice words to say about that, because the second half saw his team take the game by the scruff of the neck right from the offset. Within two minutes of the re-start Stow put together one of their best attacking moves of the game that ended with Stone having to dive full-stretch to tip a Gebrai effort over the cross bar. The visiting keeper then saved an Ibe shot with his legs.

The Walthamstow equaliser, which they had been pressing for since the half started came in the 51st minute; a wonderful strike from outside the box from Billy Jones left Stone with no chance.

The next Stow attack very nearly handed them the lead as Gebrai managed to lob Stone but somehow Tom Bentley raced back and managed to extend his leg and hook the ball off the line. But Bently, the Abbey Rangers captain, was dismissed soon afterwards for a late challenge on Gebrai. However as can often be the case, the ten men then dug in and managed to contain Stow’s forwards.

And while Stow’s defence had managed to keep Abbey Rangers quiet, the visitors were still a threat and went close with an Alex Hendrie free kick that almost caught out Bransgrove, who had to have two attempts at getting the ball into his hands, his initial tip down almost allowing Cousins a sniff but the Stow stopper managed to place his hands on the ball before the visiting striker could make a connection.

Stow fluffed their lines a little bit in the 78th minute when a ball over the top resulted in Ibe and McCullock getting in each other’s way, resulting in the visiting defence mopping up and then launching a counter-attack that resulted in Roberts having a low shot that Bransgrove tipped around the post.

The closing ten minutes was a little bit like the opening, tentative, fraught, with neither defence now allowing their opponents a sniff. Stow may have had a bit more of the possession, but any attacking forays were snuffed out as Abbey Ranger’s defence now parked the bus and kept Stow’s front men closely guarded. Roberts did manage to get his head on a cross in the 89th minute but couldn’t keep it down, and in stoppage time Ibe turned in the box and fired a shot that was deflected away for one final corner but Stow were unable to capitalise on this.

The ref then brought an end to a compelling cup tie which will have to reach a conclusion on Tuesday evening.