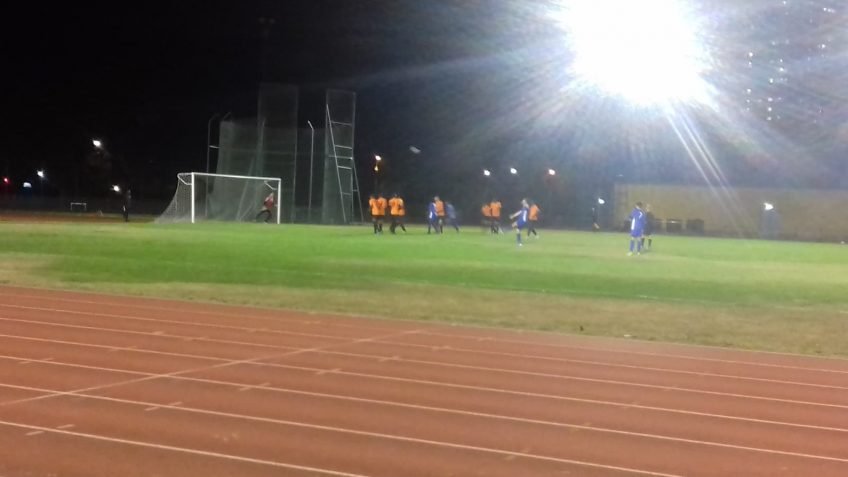 There were thrills, spills, a red card, some quality football and no shortage of goals at the Mile End derby on Wednesday evening as Sporting Bengal United and Tower Hamlets served up a cracker of a game.

Hamlets kicked off and within twenty seconds were in the Bengal box with Juaibo Balde having a shot that was blocked; Bengal then launched their first attack of the game with Chaka Barnett being fed a ball which he buried into the bottom corner of the net. The time was a mere 59 seconds – a breathtaking start to the game.

There was no let off from there either, as Bengal almost doubled their lead with a curling shot from Steven Carvell forcing Jack Gannon to make a diving save, then Hamlets themselves bore down on the Bengal goal, which was to win them two corners in quick succession before Bengal then broke away and won a corner of their own which swept dangerously across Gannon’s six-yard box.

The end-to-end nature of the game soon saw Hamlets back on the front feet, and a nice move involving Anthony Folkes and Balde looked promising but the final cross was cleared by Abraham Jerriatte.

Bengal however extended their lead in the 19th minute as a Carvell freekick caused some confusion from Gannon who hesitated to claim the ball, which allowed McIntosh the opportunity to sneak in and poke the ball into the net.

Joshua Rujoke almost cut the deficit with a long range freekick that sailed over Bilal Khan, but just failed to dip under the cross bar. However Hamlets then failed to clear their lines when Bengal got a ball into their box but Madhi Khan put too much height on his shot and the ball flew high and wide of Gannon’ goal.

Hamlets, when they had possession moved the ball quickly, and a three man-move involving Benas Vaivada, Balde and Jermane Anderson split the Bengal defence but Khan was on hand to show some quality keeping, getting down to his left to keep the ball out.

Bengal however made it 3-0 in the 40th minute when Codey Cameron was picked out by a wonderful Barnett pass, then applied the finishing touch to put his side into a commanding position.

Hamlets almost cut the deficit just before the break as Rujoke delivered a free kick that was kept out by the fingertips of Bilal Khan.

The second half started in a similar fashion to the first in that Bengal had a chance inside the opening seconds of the restart as Carvell let fly from the halfway line which tested Gannon. A minute later Hamlets went up the other end and cut the deficit as Balde latched onto a through ball and lashed it past the Bengal keeper.

Then in the 58th minute Hamlets pulled another back, this time from the penalty spot as Rujoke drilled his shot home.

But any hopes Hamlets had of continuing their revival were dashed two minutes later when a Cameron shot from the right flank beat Gannon at the far post which restored Bengal’s two-goal advantage.

Then in the 63rd minute Bengal were able to breathe a further sigh of relief as they restored their three goal advantage as Carvell picked out Barnett who unleashed a powerful shot into the bottom left hand corner.

Hamlets could have been deflated, after all they had come close to levelling the game, only to see Bengal go one to score twice in quick succession to burst their bubble. Instead they went close with two efforts; the first saw Ridwaan Hussain have a shot deflected away for a corner; the second came via the same Hamlets player who had a dig from just inside the box that was kept out by Khan diving low to his right to tip away.

The wind was taken out of Hamlets’ sails when Alan Zuqolli was shown a red card for a rash challenge which resulted in Hanlets offering no further attacks, while Gannon went on to make two fine saves to to deny Cameron adding any further goals to his and Sporting Bengal’s tally.

The result now sees Sporting Bengal move up to 2nd, while Tower Hamlets drop down to 14th.