Match Report: Billericay Have to Settle for Draw at Oxford


Billericay had to settle for a disappointing draw at Oxford City after looking in control. Two early opportunist strikes from Jake Robinson looked to have set the Blues on their way to a vital win. It was not to be as Zac MacEachran’s fine half-volley immediately reduced arrears. Jack Self completed the Hoops’ come-back with a precise curling finish after a mix up in the visiting defence.

With September representing the start of autumn, and the perfect time to plant spring bulbs or prepare winter vegetable planting, those resisting the temptation of the garden at this time of year were treated to a warm pleasant afternoon of football at the impressive Court Place Farm Stadium. The only greenery on show proved to be the luminous shirts sported by Oxford City. The hosts had kindly switched to their away strip as the usual blue and white hoops clashed with both Billericay’s home and away kits.

Assistant manager Jamie O’Hara was in charge of team affairs in the absence of Harry Wheeler, and with nothing official communicated by the club on the current situation, fans were left to ponder whether the change of season was also heralding a change of manager. Perhaps Karl Marx’s view that, ‘History repeats itself, first as tragedy, then as farce’ may prove to be prophetic. Results had been satisfactory with Blues sat 4thin the table.

Billericay rang the changes, bringing in four revisions to the line-up that had secured a draw against Bath City. Whoever was choosing the team showed admirable resolve to take tough decisions by dropping two big names in striker Matt Rhead and attacking midfielder, Jordan Parkes. Defensive midfielder, Doug Loft, still accumulating fitness after injury, understandably dropped to the bench. Parkes would not be long out of the action, replacing a stricken Alfie Potter early in the match.

With Wheeler’s recent short-term signing George McLennan, as left-back cover, presumably at home dividing up the herbaceous perennials, Craig Robson returned to the starting line-up in this unfamiliar role. Charlie Wassmer came back into the centre of a back four with Gavin Gunning accommodating by being moved forward into a defensive midfield position. Also starting, initially on the right of midfield came Jack Paxman. Billericay lined up in what looked to be a standard 4-4-2.

Oxford City made two changes to the side which had narrowly lost at runaway leaders, Wealdstone, enjoying a fine start to the season under the management of Dean Brennan. Signed on Friday, former Wingate & Finchley winger, latterly at Wealdstone, Reece Beckles-Richards, made his debut. Returning after injury, central midfielder, Reece Fleet came in for the suspended Josh Ashby.

Home manager, Mark Jones, was anxious to find a solution to a goal drought after a dry run of three matches. His preferred option against the Blues was to look to exploit any defensive weakness with speedy wide-men, Craig Fasanmade and Beckles-Richards. As a result, the more traditional centre-forward, Stefan Brown, once the scorer of a 15 minutes FA Cup first round hat-trick for Totton, was dropped to the bench. A 4-4-2 diamond formation, with MacEachran playing the advanced role from midfield, was employed in place of the usual 4-3-3 favoured by Jones.

With the composition of the Billericay side and formation clearly not the work of Wheeler, it was interesting to view how alternative input would fare. At first, signs were highly encouraging, the team seemed sharper around the pitch, passing combinations were thriving, the long ball was used only sparingly, and several promising runs from deep revealed glaring weaknesses in the opposition midfield. For twenty minutes, the match looked like a top six versus bottom six clash.

It would only take 11 minutes for Billericay’s early superiority was rewarded with the opening goal. Robson, who had a strong game, picked up possession in his own half and strode forward purposefully. With the Oxford midfield parting like the Red Sea, the stand-in left-back came within sufficient range to try a shot on goal. Deflecting off a defender to the right side of the penalty area, a grateful Robinson, restored to his rightful central striking position, seized on the opportunity to drill home across goalkeeper, Harry Isted, and reward the visitors for an enterprising start. 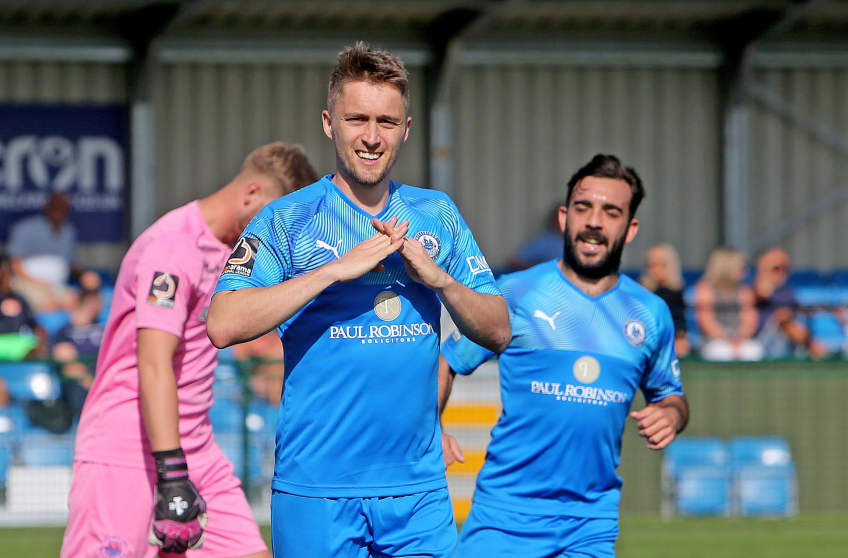 Misfortune struck again for the Hoops as a very similar goal would see Robinson net once more just 7 minutes later. This time, it was Paxman who profited from the inattentiveness of midfield minders as he picked up a pass and moved into the final third of the pitch. His strike from the left would also be diverted by an Oxford player into the path of a lurking Robinson. This time, stationed in the six-yard box, the wily striker applied a simple side-foot finish for his second. 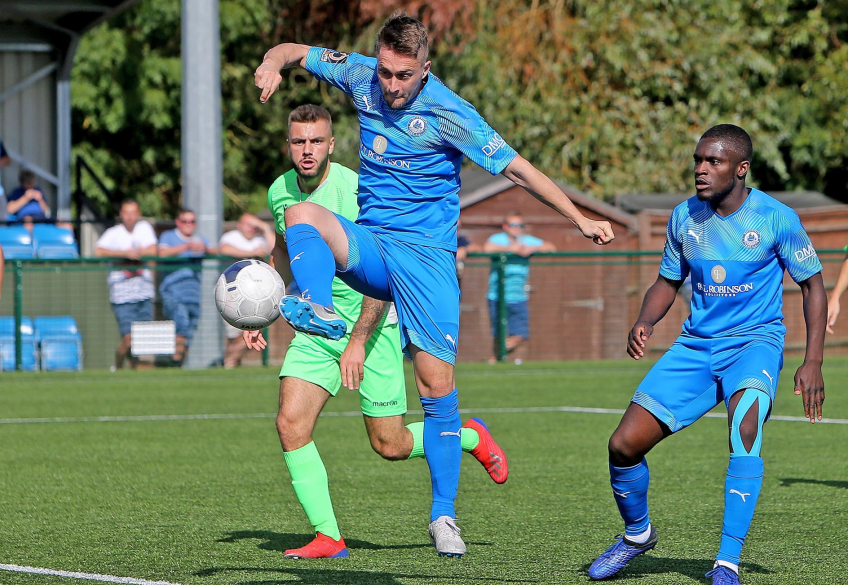 Billericay looked to be cruising and, at this point, home fans must have feared the worst. But for excellent defensive covering from home skipper, Joe Oastler, commanding in the heart of the Oxford defence, Robinson could well have been returning home with the match ball.

A moment of magic on 20 minutes from MacEachran changed the dynamic of the match and brought the Hoops back into the game. Receiving a high ball on the edge of the penalty area, he chested the ball down, let it bounce and fired home on the half-volley into the top corner.

With Oxford visibly taking confidence from their swift reduction of the deficit, Jenson Wright tried his luck from range with an ambitious shot that dipped just over the bar. In response, another run from Billericay’s Paxman ended with a curling shot towards the bottom corner that Isted dived to push wide.

Both sides were contributing to an entertaining match albeit perhaps more open than either coach would wish to see. Blues’ creative fulcrum, Sam Deering, was at the height of the away side’s invention. For the Hoops, MacEachran, was busy orchestrating Oxford’s best attacking moves. 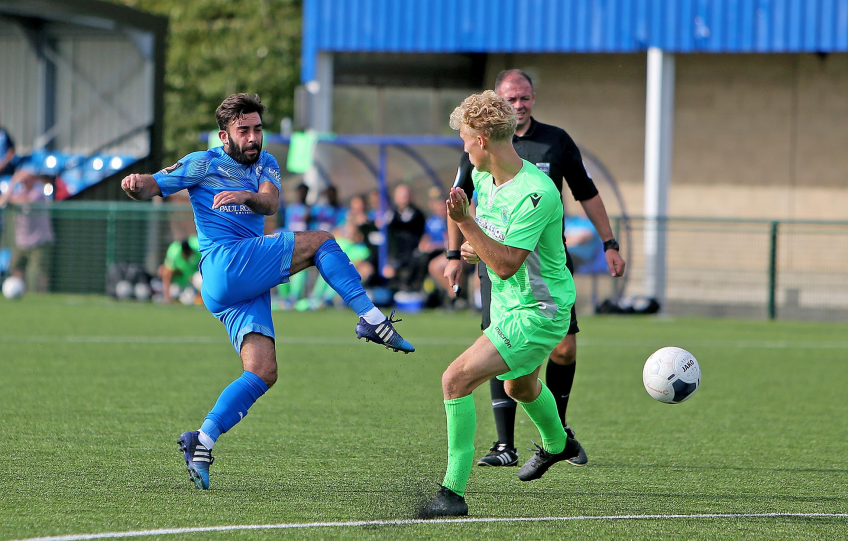 Billericay finished the first period strongly as a Parkes drive flew just too high. A fierce Robinson shot was next parried by Isted and he had more work moments later to claw away a Ronnie Henry header in the 41stminute.

Visiting goalkeeper, Julian, would also face a test before the break from a MacEachran set piece. Curled over the defensive wall, the effort demanded swift footwork, and a strong hand, to divert the top corner bound strike for a corner.

With some concerns that Billericay’s midfield had started to drop deeper, the second half began well with the Blues seeming to retake the initiative. Moses Emmanuel, who had a quiet game by his standards, picked up possession on the right and put in a tempting cross for his strike partner. Robinson reached the ball a split second before Isted but could only place his header straight at the Luton Town loanee, deputising for the injured, Craig King.

Relief that the Blues were back in control proved to be mistaken as a through pass from Jefford found its way to Beckles-Richards. In acres of space on the left side of the Billericay defence, neither centre-back nor full-back picked him up, allowing the winger a free run at the goalkeeper. Swift to react to the threat, Julian forced the Oxford attacker into what looked a blind alley. Marooned at an acute angle to the left of the goal, the ball was cut back to Fasanmade who picked out Jack Self.

With the Billericay defence about to engulf him, Self skilfully curled a precise finish into the left corner of the goal to equalise for the home side. Having joined the club in November 2018 from Banbury United, Self has graduated from the substitutes bench to become a first-choice selection in this Hoops side. Clever at stealing possession, and with an eye for an astute pass, he performed well.

Oxford, with a spring in their step, poured forward but were somewhat lacking in getting the final pass or making the right decision to make the most of promising approach play. A break from Fasanmade tested Henry as the tricky winger sought to turn the Blues centre-back this way and that.

Proving the adage that there is no substitute for experience, the wily Henry surprised with more speed than he is given credit for and blocked the way to goal. Under examination from pacey strikers during the game, Henry impressed with his marshalling of the danger and was rarely beaten.

Billericay’s best opportunities of a disjointed second half display, very much in contrast to what had come before, were no more than half chances for substitutes. Danny Waldren fired over on 73 minutes and Matt Rhead headed wide under pressure from right-back, Kyran Wiltshire.

With Robinson looking at times very isolated, stationed a good 30 yards ahead of any other Blues player, the linkage between attack and midfield looked to have broken down. With 10 minutes remaining, Oxford looked to be the side that was more likely to get a winner should it arrive.

That the home side did not prevail had much to do with Billericay’s regular saviour, Julian. A Finn Tapp run and pass to Oxford substitute, Brown, saw a drive head like an Exocet towards the top corner. Julian produced his best stop of the match to make a sprawling save at the cost of a corner. Coming to nothing, the game closed with one last shot from save, that was parried to safety.

Having started the match well and established what looked a winning position, the loss of a two-goal lead, and surrender of two points at 18thplaced Oxford City, looks a poor result. A promising start gave way to a puzzling performance after the break as the initiative seemed to be handed to the opposition. In the end, it was with some relief that the Blues returned to Essex with a point for their efforts.

The Blues have had trouble on the road and results have featured draws at lowly Hampton & Richmond and defeats at Hemel Hempstead and Chippenham Town. Clearly, events off the field, with the manager not present at the match, will be disruptive and cannot have helped team preparation. Sadly, if Billericay are to endure their very own “ground hog day”, it is likely that the period of uncertainty is only just beginning. Let’s hope the team gets back on track quickly.

“Two fantastic saves from MacEachran and Brown kept Billericay on track for at least a point. Did superbly to hold up Beckles-Richards when clean through and had no chance with either goal.”