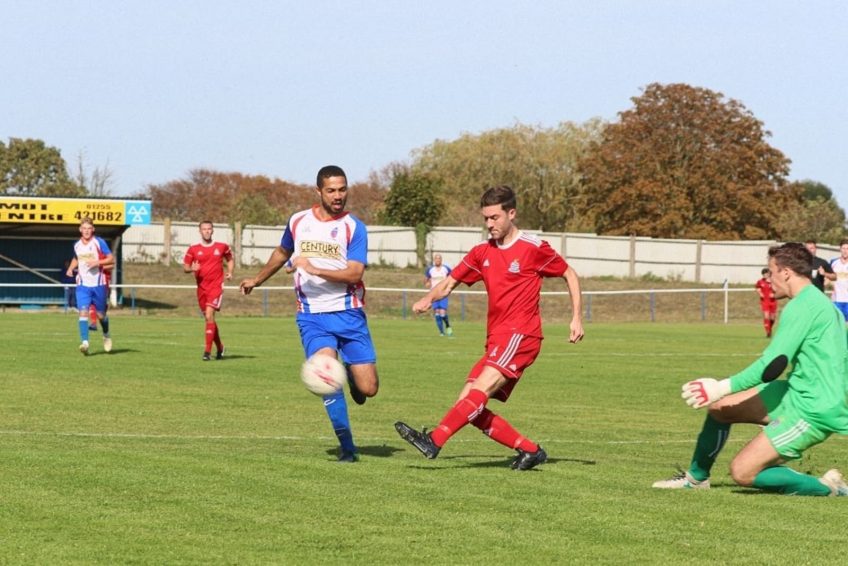 Redbridge can feel mightily aggrieved to have seen their Vase campaign falter as FC Clacton as they hit the post three times and came away from the game at the wrong end of a 4-1 score line that their performance didn’t warrant.

The Motormen infact had their engine up and running straight from kick off and almost took the lead inside thirty seconds as Kane Hearn got in an early shot that Joe Fowler pushed behind for a corner. From this Redbridge then won a succession of corners with the Clacton defence being forced into some very heavy early work.

The Seasiders won a corner of their own in the 7th minute that Florent Gislette punched clear. The Redbridge keeper was then called into action as a Clacton free kick was met by a powerful Wayne Chapman header which the Redbridge stopper tipped onto the cross bar. The resutling corner clipped the near post before being hooked clear.

All this early action had taken place inside a breath-taking ten minutes. It took until 15 minutes for the next piece of goalmouth action which saw Kane Hearn waste a Redbridge opposrtunity as he could only drive his shot straight at the Clacton keeper. Then a minute late Taylor Tombides twisted and turned his marker inside-out before firing a shot across Fowler’s goal that was only an inch the wrong side of the post. Clacton were able to launch one offensive themselves but Jack Camplin could only fire a shot straight at the Redbridge keeper.

The best chance of the game thus far fell Redbridge’s way in the 24th minute; Tombides was able to round the Clacton keeper but his shot from an acute angle hit the post before being hooked off the line by Chapman. The rebound may have fallen kindly to Gilchrist but he wasted the opportunity and blazed the rebound over the bar.

An ankle injury meant the Florent Gilchrist had to be replaced in the 29th minute by George Martin and it looked like he was going to be involved with a one-to-one a few minutes later when Jordan Lartey was bearing down on goal until Joe Maskell dispossessed him just inside the Redbridge box.

Lartey bent a ball over the crossbar and then had a deep cross that was cut out by Martin. The Seasiders were finishing the half on the front foot, while the Motormen were further handicapped when Tombides, who had looked so lively upfront, limped off to be replaced by Sam Dickens.

The Seasiders were to be saved by the woodwork once more after Redbridge burst forward, having initially having to defend a Chris Ribchester free kick which was well saved by Martin; from this the Motormen then charged up the other end with Gilchrist having the final shot that sailed past the Clacton keeper but they were to be denied again by the post.

The Motormen were to then have a sense of rough justice as they then fell behind deep inside first half stoppage time when Harry McDonald’s shot was parried by Martin with Callum Griffith side-footing the rebound home.

The Seasiders made sure that is was they who opened the second half with the bit between their teeth; Lartey having a shot that shaved the Redbridge crossbar insdie the opening minute.

In the 48th minute the hosts extended their lead as Clowsley beat the offside trap, moved forward with the ball before picking his spot and placing the ball beyond Martin.

But Redbridge found an instant reply as three minutes later Hearn turned and fired a ball past Fowler to cut the deficit: it was game back on again.

However Martin had to make sure that Clacton did not instantly regain their two-goal lead as he first dived low to his right to keep out a McDonald shot; and then moments later made an unconventional save with his legs to deny Griffith.

In the 65th minute it looked like Clacton were about to score again as Thompson burst through but Martin stood his ground and did enough to put the Clacton player off as he could only poke his shot horribly wide.

Clacton were able to extend their lead again in the 70th minute when a Lartey header seemed too hot to handle for Martin who inadvertently mishandled the ball and it slipped between his hands and dropped behind the line.

Martin did prevent Clacton making it four when he blocked a Kyelan Marvell shot. But Redbridge then went forward and were denied yet again by the woodwork after Sam Dickens, son of former West Ham United player Alan, had a bullet header that struck the post. Barlow also placed a further Redbridge header narrowly too high.

Redbridge kept going, but you sensed the game was drifting away from them. Martin had to pull off two good saves to deny Clowsley, whose header at the back post looked destined for the net, and then getting down to tip a McDonald shot around the post.

Barlow was to have Redbridge’s final chance of the match, with his shot being blocked by Fowler in stoippage time; from this the hosts then launched one final attack themselves which ended with McDonald rifling the ball past Martin to close the show and put their name in the hat for the 1st Round draw. Redbridge meanwhile must feel gutted as they played some nice football at times; very nearly took a very early lead; and then had to suffer agony as three good efforts were denied by the post that on another day may well have gone in.