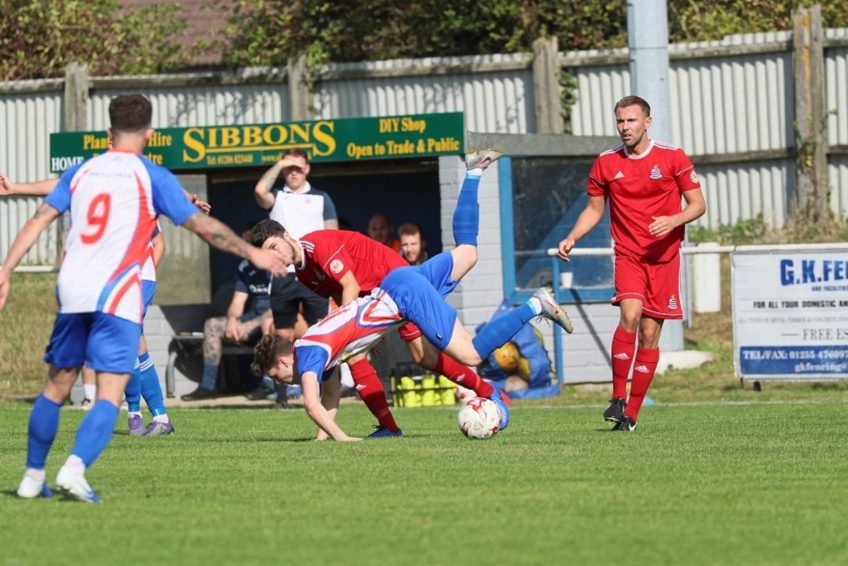 Tower Hamlets started the Vase weekend off with a trip to New Salamis and came away with their Vase campaign over for another season after they lost 2-0 to the Spartan South Midland Division One side. Saturday saw four other ESL sides eliminated from the Vase, with Hashtag United’s 3-2 defeat at the hands of Frenford being another shock result. George Smith and Jesse Waller-Lassen supplied the Hashtag goals, but a brace from Ian Sawyer alongside a Luke Woodward effort sees the Eastern Senior League South side into Monday’s 1st Round draw. St. Margaretsbury lost 2-1 at Whitton United, with Kyle Roberts scoring their goal via a penalty. Three first half goals placed Brantham Athletic in the driving seat, with a Patrick Brothers brace alongside a Taylor Bannister goal looking like it had put their side in an unassailable position. However Michael Mignot cut into that lead in the 65th minute; cut into it even further three minutes later, but there was to be no way back after Asa Millard notched for Brantham ten minutes from time. Lady Luck turned her back on Redbridge on Saturday as they lost 4-1 at FC Clacton despite hitting the woodwork on three occasions. Having dominated large spells of the first half, the Motormen went in at the break trailing to a Callum Griffith goal that came deep into first half stoppage time. Jake Clowsley doubled that lead in the 48th minute, but Kane Hearn handed Redbridge a lifeline as he hit the target three minutes later. However FC Clacton booked their place in the next round after Jordan Lartey and Harry McDonald scored goals later on in the half. Two ESL sides did make progress with Takeley making light work of Wormley Rovers with all their goals coming in the opening 45 minutes. Michael Castle opened the account in the 29th minute; Jason Todd then doubled that lead a minute later and then in the 35th minute Nick Barrett closed the account when he rifled home from the penalty spot. Enfield meanwhile placed their name in Monday’s draw after beating local rivals Enfield Borough 2-1. Joe Pattison handed the E’s a 1-0 lead which became 2-0 on 75 minute thanks to Olly Miles. However Richard Erin reduced arrears four minutes later but they was to be no further scoring.

Walthamstow needed penalties to overcome Olympian League Premier Division outfit Buckhurst Hill. Ollie Fortune scored for the Stow who then went on to score 3 penalties without reply to see them make progress.

With the top three either on Vase duty or without a game, meant that it allowed some of the teams below a chance to play catch up and cut the point deficit. Hadley certainly made full usage of that as they slammed six past Sawbridgeworth Town without reply. Ned Clarke scored a hat-trick, Solomon Ofori bagged a brace, while Manny Hammond also got on the score sheet with the result now seeing Hadley up to 4th. Sawbridgeworth Town meanwhile remain bottom of the table. Sporting Bengal United finish the day in 5th after a 4-0 win over Ilford. Stephen Carvell and Curtley McIntosh gave the hosts a 2-0 lead at the break, with Chaka Barnett and Codey Cameron notching in the second half to make sure Imrul Gazi’s side took the full quota of points. Southend Manor sit 18th after a 5-0 defeat at Woodford Town on the Friday evening. Temi Babalola, Josh Steele, Georges Kebi, Marcus Painter and Nektarios Varoxakis all scored for the Woods who are now 7th. Clapton sit one place above Southend Manor after they conceeded a very late penalty at Hoddesdon Town which Isaac Marfo-Jacobs promptly despatched to give his side a very late winner that also sees them now occupying 9th position in the table. Stansted meanwhile fell behind to an early Reece Mosanya goal but went on to beat Cockfosters 2-1 courtesy of second half goals from Daniel Cheema and Carl Mullings. The result sees Stansted now up to 12th while Cockfosters remain nearer the top end of the table, although this result has seen them slip down to 6th.