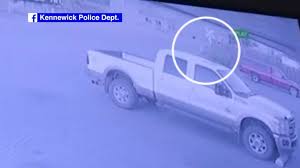 Today we heard about a citizen from the US State of Washington who reported that his car had been stolen.

Nothing so unusual about that but it subsequently emerged that the truck owner was busy breaking into a store across the street at the time his vehicle was taken!

The Kennewick Police Department said William Kelly called authorities on Sunday morning around 6am to say his 1992 Chevrolet pickup truck had been taken after he left the keys on the seat.

It seems that a man riding a bike spotted the keys and then threw his bike in the bed of the truck and took off.

As a result Mr Kelly has been charged with burglary although his vehicle has not yet been traced.

Being a Tuesday Margaret Mills returned to tell us about a renowned judge, Sir Nicholas Conyngham Tindal, who was born in Moulsham Street in Chelmsford in 1776, the site being marked with a commemorative plaque.

A statue to the great man also stands in the Square that bears his name.

If you missed what Margaret told me about this remarkable man, you can listen again here: –