Walthamstow Stroll Into Next Round Of FA Cup 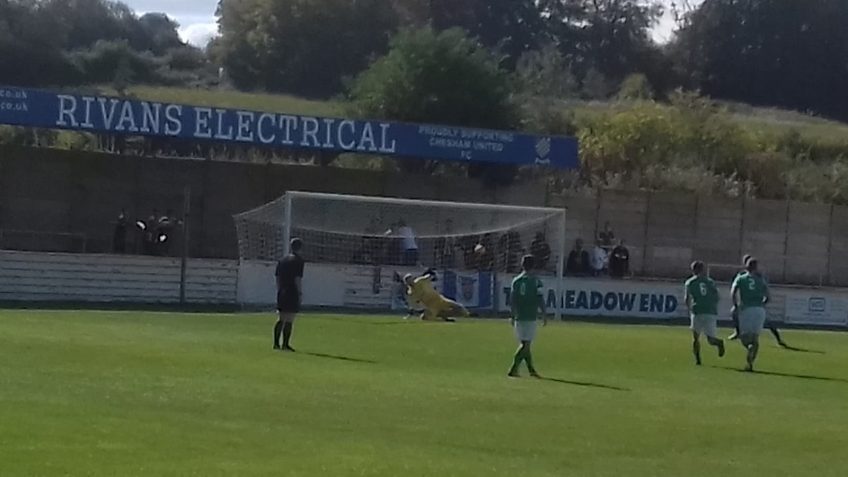 Walthamstow’s FA Cup campaign continues into the 2nd Qualifying Round as they beat another Step 4 side, this time BetVictor Southern League outfit Aylesbury United. The hosts had made a decent start to their Division One Central campaign and were the favourites going into this, but Walthamstow put on a master class to become the second ESL club over the course of the weekend to book a place in Monday’s draw.

The opening stages saw both teams getting near their opponent’s penalty box but there was nothing too clear cut. Then in the 9th minute Stow were handed an opportunity when they were awarded a penalty however Callum Ibe’s effort was saved Jack Hopwood.

Emiel Aiken had the next Stow chance but could only lift his shot over the crossbar, while Aylesbury then got a ball over Walthamstow’s backline but Melvy Nsomi was placed in a good position but his shot was too wild and flew over the bar. Those were the pick of the chances in the opening 15 minutes, a period when Stow did get the ball in Aylesbury’s net but the goal was ruled out due to a foul in the build-up.

However Stow placed themselves firmly in command of the tie inside three first half minutes, taking the lead in the 21st minute when Samrai Gebrai beat Aylesbury’s offside trap, latched onto a through-ball and had a low shot saved by Hopwood, but Danny McCullock stabbed home the rebound. Three minutes later Aiken was fouled in the box, meaning another Walthamstow penalty and this time they made no mistake as Billy Jones thumped the ball past Hopwood.

The Ducks needed to get flying and won a corner in the 33rd minute when Sydney Ibie’s header was deflected behind by Jamie Bennett. The resulting corner fell to Ollie Hogg who could only drill his shot over.

Stow kept Aylesbury quiet, with their midfield solid and the defence also working as a solid unit. It meant that Bransgrove had little to do apart from claim the odd cross. At the other end Gebrai flashed a free kick just wide. The hosts did close the half with two chances, an Ibie shot in the 42nd minute was straight at Bransgrove; then in stoppage time Nsomi fluffed his lines when he messed up a one-to-one with the Stow keeper and could only fire his shot several yards the wrong side of Bransgrove’s right-hand post.

Aylesbury had to find an early goal if they wanted to get themselves back into the tie but they were unable to find a way through. Sonny French headed a Hogg free kick wide; Greg Williams and Mark Riddick both had shots blocked before Aylesbury shouts for a handball in the box were not adhered to by the referee who waved play on.

In the 55th minute there were to be no doubts as Ibe was brought down in the box and the referee pointed to the spot, giving Stow their third penalty of the game. This time Gebrai fancied his chances and riffled the penalty home with some aplomb.

Aylesbury now needed a miracle, but they did launch an instant attack which ended when Dave O’Connor blazed his shot over. Bransgrove had to punch clear an Aylesbury corner in the 70th minute, and from this Stow launched a counter-attack but Gebrai dragged his shot wide.

Nsomi did manage to work his way into Walthamstow’s box, laying off a nice ball to Williams whose shot took a deflection. Williams and Ibie also placed a header each wide, then a Hogg free kick sailed over Bransgrove’s cross bar. It had been meagre pickings for Aylesbury who didn’t create much due in part to Walthamstow’s defence keeping it tight. But when the hosts did find a way through they were wasteful with their chances meaning that Bransgrove didn’t have any saves to make.

Stow had been clinical when it mattered, scoring two of their three penalties plus one goal from open play and they could have added to their tally in the closing stages when Fortune played in Gebrai, the resulting shot was skuffed wide however. It didn’t really matter in the end though as Walthamstow put on a great display to book their place in the 2nd Qualifying Round having so far scored ten goals without conceding any at the other end. Ryan Maxwell will no doubt be happy with that statistic, while the club can now bank a bit more wlecome prize money.