Billericay’s perfect home record came to an end after a 1-1 draw with Bath City. Sam Deering set the Blues on their way with an early strike only to be pegged back by a Ryan Brunt penalty just before the break. In a match short on entertainment, stale-mate prevailed as the second half unfolded without providing great incident of note.

The home side made four changes to the team that drew in mid-week. One of those was enforced as news broke of an injury for left-back, Callum Kennedy. With a torn quad muscle sustained in training expected to result in a six-week absence, manager, Harry Wheeler had acted quickly to bring in a familiar face to him. George McLennan, formerly of Maidstone United, joined up with his erstwhile manager to make his full debut versus the Romans. 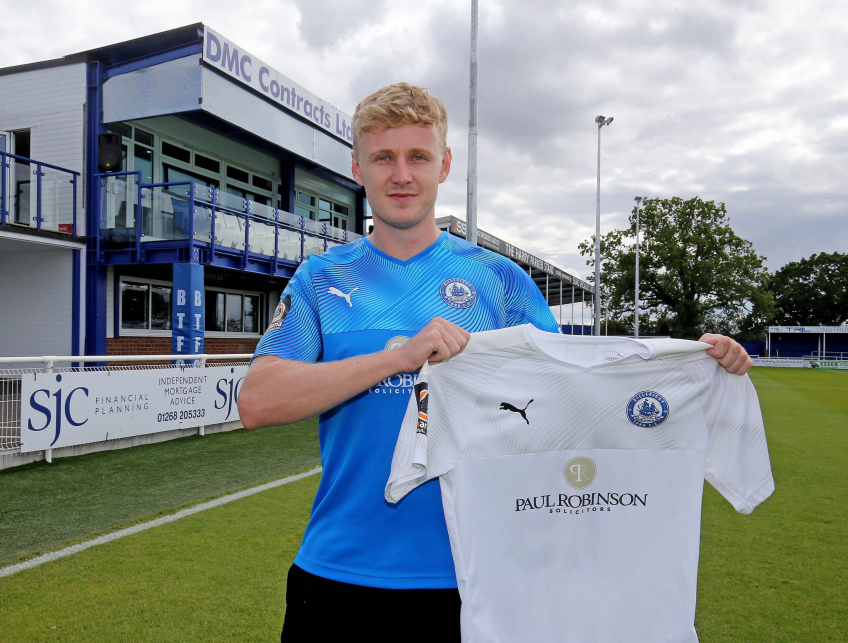 Back in the side came right-back, Ben Nunn, and central midfielder Doug Loft in place of Louis Ramsay and Danny Waldren, respectively. Despite his red card at Chelmsford City, Ramsay was available for selection but did not make the squad. With Wheeler deciding to change formation to 4-3-3 to match up with Bath City’s expected alignment, Jake Robinson came in. He completed a front three, comprising Moses Emmanuel and Matt Rhead, at the expense of second holding midfielder, Craig Robson, who dropped out of the squad.

Bath City made just the single change to the line-up that had beaten Hampton & Richmond as defensive midfielder, Frankie Artus, made way for Tom Richards. Centre-forward Ryan Brunt, having scored twice in mid-week in only his first start of the season, retained his place. Having experimented with a 4-4-2 diamond for the trip to Chelmsford last week-end, manager, Jerry Gill, reverted to his more customary 4-3-3 formation. This would give licence to new arrival, winger Owura Edwards, to express himself after a scintillating home debut.

As the teams took to the pitch, it was clear that the Romans had given some thought to the threat that Matt Rhead might pose. With former Bath City defender, 6ft 5ins Robbie Cundy, now departed to Bristol City, an even taller replacement has been found. Visiting centre-back, Matt Bower, signed after leaving Cheltenham Town, may well be the tallest player to venture to the Steel Stadium this season, measuring a lofty 6ft 6 inches. His remit was clearly to shadow Rhead and seek to nullify his aerial power, which he only partly achieved.

Rhead was involved in early exchanges as a couple of attempted lay-off’s for his strike partners did not quite come to fruition. Firstly, a chested pass for Emmanuel demanded too much, evading the striker’s efforts to collect, eventually running through to Bath City’s goalkeeper, Ryan Clarke. Moments later, when well placed in the penalty area, a weak sideways pass failed to find Robinson when well-placed and the visiting defence cleared.

After a McLennan overlap on the left side was halted illegally, a free-kick to the Blues in a dangerous position was to provide the first moment of real excitement in the game. Jordan Parkes’s delivery was pinpoint as he arrowed a delivery into the six-yard box that was met on the volley by Emmanuel. Sending the ball into the roof of the net, the striker wheeled around in delight only to have his celebrations cut short by the linesman’s flag. 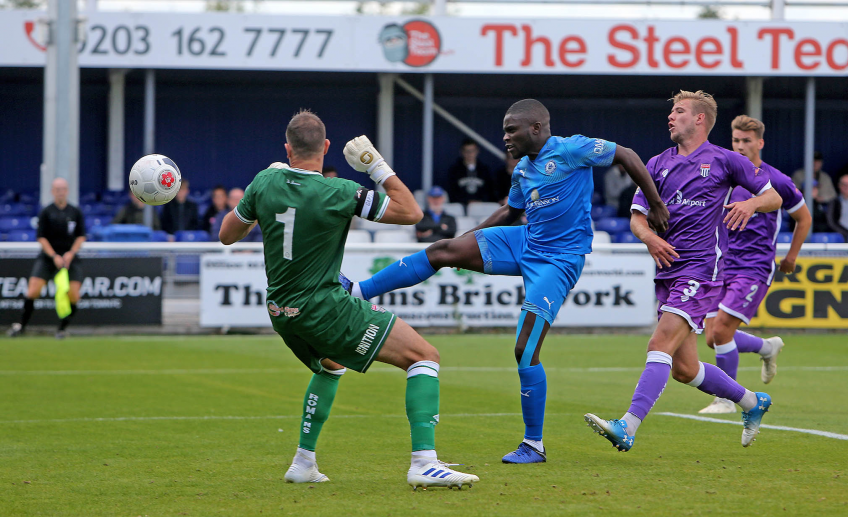 Moses Emmanuel thinks he’ s scored only to be denied by the linesman’s flag. Courtesy; @nickyhayesphoto

Billericay would not be denied and soon after the home side did take the lead. It all started with Robinson, winning a tackle with Edwards and swiftly moving possession on to Loft. Finding Deering, the midfielder sped away from the pursuing Harry Hamblin and advanced towards goal. With no one coming to counter, he saw the space and arrowed a fine 25-yard drive into the bottom far corner of the net beyond the despairing dive of Clarke. 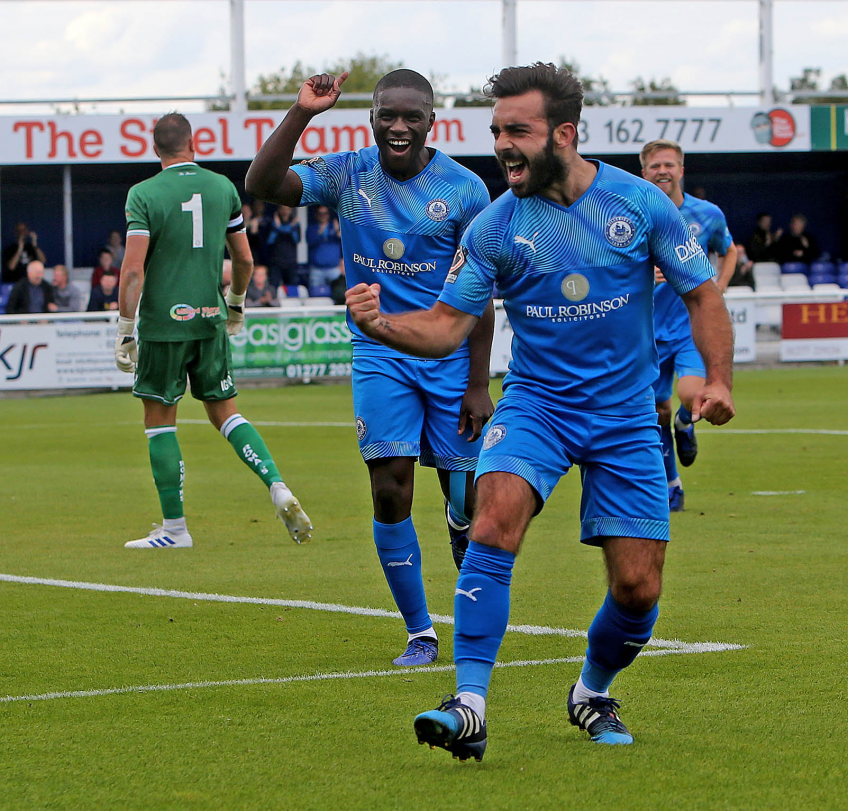 Stung by going behind, Bath responded as first Brunt hit a weak shot on target that was easily pouched by the Blues goalkeeper, Alan Julian. Soon after, attacking midfielder, Dan Rooney sought to work a shooting opportunity by cutting in from his left side berth. Before he could threaten, Nunn had reacted quickly to stem the danger with a sliding tackle.

Bath kept pushing and a Gavin Gunning mistake in midfield saw the Romans turn defence into attack within the space of a split second. With Edwards on his way, it was only the swift recovery of Loft who swooped to prevent Brunt from getting on the end of his cross. The resulting corner brought another tense moment as Bower lingered menacingly at the far post and was able to evade Rhead sufficiently to direct a 32ndminute header just off target.

If Bath were to work themselves back into the game, it was looking increasingly likely as if this would stem from Edwards, a recent arrival on loan from Bristol City U-23’s. Enough had been seen of him on his debut against Hampton to know that he would readily look to take on his direct opponent and create goal-scoring opportunities for his team-mates. Up against a left-back, making his debut for the Blues, that had not played since last February, he must have had high hopes that he would be able to influence the match in favour of his side.

Sure enough, the visitors struck back with Edwards heavily involved. Guiding the ball all the way across the pitch, taking in left-back Connor Riley-Lowe, it ended up with Edwards on the opposite side. Linking with Joe Raynes, the nippy winger dashed through to collect a return pass. Seeking to cut inside McLennan, he was brought down as the left-back went precipitously to ground. Brunt took the responsibility and emphatically smashed the ball into the top corner to the right of the goalkeeper for the equaliser on 39 minutes. 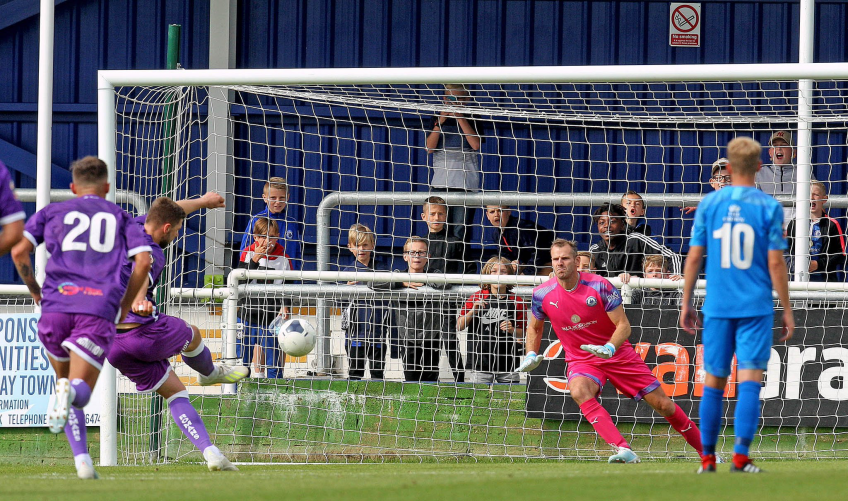 Half-time saw Billericay bring off McLennan who had performed well but, caught out by Edwards, more of the same was expected and, now fit, Alfie Potter came on in his place. The second period was notable for its lack of incident in which no shots on target were recorded. Up until the hour mark, all the crowd could content themselves with was a couple of off-target Bath City shots from Tom Smith and Brunt, respectively. It was slim pickings.

With the ball stubbornly trading ownership in midfield but going no further, it looked as if the two coaches’ decision to adhere to 4-3-3 formations had led to stalemate. Billericay’s three-man strike-force barely functioned in the final third with the relentless search for Rhead dominating attacking intent. He competed gamely but the ball would just would not fall into the path of a team-mate. Invariably, if there did look to be a promising opening, it would be ended by the offside flag, an event which occurred with frustrating regularity.

A double change from Bath on 63 minutes did help to increase their attacking momentum as Ross Stearn and Adam Mann came on to replace Brunt and Rooney. Stearn immediately introduced himself with a shot but Henry was on hand to block his effort as well as the follow-up from Edwards. Shifted more centrally as part of the shuffle, the winger’s pace in those areas was causing problems.

In a mad few minutes, after the lack of action that had preceded events, Smith very nearly got the break-through with a low 25-yard drive. Taking a deflection on its way to goal, a wrong-footed Julian could only watch on in relief as the ball sped wide of his far post. Moments later, Edwards patrolling the space just outside the penalty area latched onto a weak defensive head to send back a drive that whistled past the post once again.

Billericay’s best chance to snatch a win consisted of a swiftly taken Rhead free-kick that sent Emmanuel through on goal only for the referee to call play back for a re-take. After that, with two minutes remaining, Robinson was unable to repeat his usual trick of contributing with a late goal as his one opportunity was curtailed by Bower who blocked his effort.

In a match remarkably short of incident of note, the taking of a point against a strong Bath side will be seen as the main achievement with the performance likely to be glossed over. Lacking attacking creativity, and without much in the way of passing combinations, at least the defence held firm and the Blues found a way to ensure that the influence of Edwards remained relatively controlled after his fine run had earned the visitors that vital penalty.

As a barometer of progress, since the last visit of Bath for the final match of last season, Billericay have improved and never looked in any trouble against the visiting side. The team did, however, look ill at ease effectively playing the formation of choice of the Bath coach. As a method of countering the opposition, and trying to squeeze in all the strikers, it is understandable why it was used. However, finding the best way to utilise Rhead to the greatest benefit of the team still appears to be a conundrum that has not yet been solved.