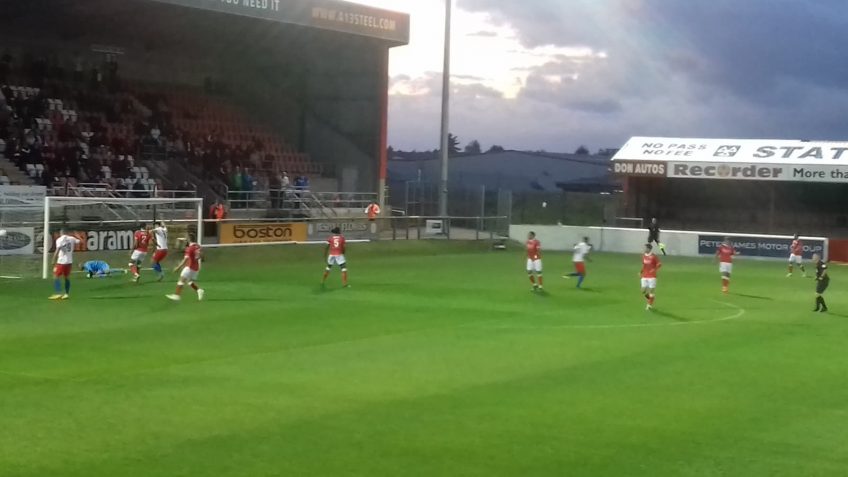 Dagenham and Bromley shared a point on Wednesday after the visitors equalised with the last kick of the game, after the hosts had taken the lead with their opening attack.

A mere two minutes were on the clock when ball into the Bromley box was thumped home by Angelo Balanta.

The Ravens however looked to get an instant equaliser and Michael Cheek was instantly charging onto a through ball but Elliot Justham got down bravely to claim the ball. Soon afterwards Billy Bingham played a ball into the path of Frankie Redmond whose shot was deflected for a corner.

The Daggers were back on the attack themselves in the 15th minute when a fine passing move saw Joe Quigley getting inside Bromley’s box but he was crowded out before he could unload. Five minutes later Balanta played a ball past Bromley’s defence that Joan Luque ran onto but he was at too acute an angle to get his shot on target.

Bromley almost equalised when Luke Coulson’s initial shot was blocked, but the ball fell to Reeco Hackett-Fairchild whose shot clipped the post. At the other end Marc Anthony Okoye had to put on a one-man defensive show as he halted Balanta and then had to put in a tackle to dispossess Quigley. Cousins cut out a deep cross from Wright, then Luque found Balanta with a through ball whose cross was headed clear by Wood.

Justham had to leap high to catch a ball in the 41st minute whilst surrounded by Bromley players, but the Daggers went up the other end and won two corners in quick succession without managing to test Cousins. And just before the break Bromley burst forward with the final ball finding Raymond lurking at the back post but he was unable to make a clean connection and so his chance ended up missing the target by some distance.

The visitors opened the second half with purpose with Bush getting his head onto a Raymond free kick which needed Justham to tip around the post. Bromley continued playing balls in and around Dagenham’s box, but the Daggers soon found a way to cut the supply to the Bromley frontmen. The Daggers had the first shot of the half just past the hour when Luque turned and drilled a shot wide if Cousins’ right hand post.

Clark headed a Bromley corner clear in the 64th minute, but the ball was reconstituted back needing Justham to punch the ball clear; even then the ball soon came back across the Dagenham goalmouth which needed Justham again to show safe hands as he cut the ball out. It was a good spell of Bromley pressure and it looked like they were about to equalise when Hackett-Fairchild was through on goal, but his heavy first touch meant that the ball ran away from him into the possession of the Daggers keeper.

The hosts eventually were able to produce a couple of chances with Dobson having a shot tipped around the post by Cousins, then the same Dagenham player dinked a ball into the Bromley box which Luque could only drill over the bar.

In the 79th minute Graham went on a good run, darting past a number of Bromley players but his final shot was straight at Cousins.

The visitors had strong appeals for a penalty turned away when Hackett-Fairchild was bundled over by Wright in the 83rd minute. Two minutes later Dagenham could have closed the show when Brundle had a low shot which was parried by Cousins. Had that gone in it would have secured all three points for the Daggers.

As it was Hackett-Fairchild went mightily close with a free kick that was kept put by the fingertips of Justham in the 90th minute; Hackett-Fairchild however found the equaliser in stoppage time when he sped into the box and then slotted the ball past Justham.

Dagenham drop down to 12th after this game, with a long trip to Torquay United for their next league engagement. Bromley meanwhile remain 3rd after their late salvage show.