Emmanuel the Saviour of Local Pride At Chelmsford


Moses Emmanuel ensured ten-man Billericay salvaged local pride with the equaliser in a hard-fought 1-1 draw on Monday night at the Melbourne Stadium. Chelmsford City led through Anthony Church’s header but could not hold their advantage as the points were shared.

Against the background of a claret evening sky, Billericay manager, Harry Wheeler, made a single revision to the line-up that had beaten Hungerford two days earlier. Back came Danny Waldren to anchor midfield as Doug Loft dropped to the bench.

Noting the opposition’s numerous options in central areas, and tendency to play a compact style, Blues resorted to the extra security provided by a pair of holding midfielders in a 4-2-3-1 formation. Once more, Jake Robinson remained on the bench as the aerial abilities of Matt Rhead were preferred to facilitate a direct style of play.

Chelmsford made two changes after the narrow home win over Bath at the week-end. After three weeks out, Mickey Spillane returned to the centre of defence in preference to recent arrival, Tom Gardiner. Having impressed from the bench in his last appearance, Billy Knott, came into the side at the expense of striker, Sam Higgins.

Home manager, Rod Stringer, elected to start with a 4-3-3 formation although, with wide-men on defensive duties, this often seemed like a 4-5-1. With more options to pick from, Elliott Omozusi was shifted to right-back after several outings at centre-back.

With both sides appearing conscious of the importance of not being dominated in the centre of the pitch, the midfield congested swiftly. Any space to be found was at a premium with early width purely the preserve of the adventurous full-back.

In an opening that struggled for incidents of note, home front-man, Robbie Simpson, was a beacon blinking brightly through the gloom. Cutting an energetic if, at times, lonely figure, the 34 years old veteran striker pursued the ball with youthful enthusiasm and was effective in providing a link to play in runners from the Chelmsford midfield. 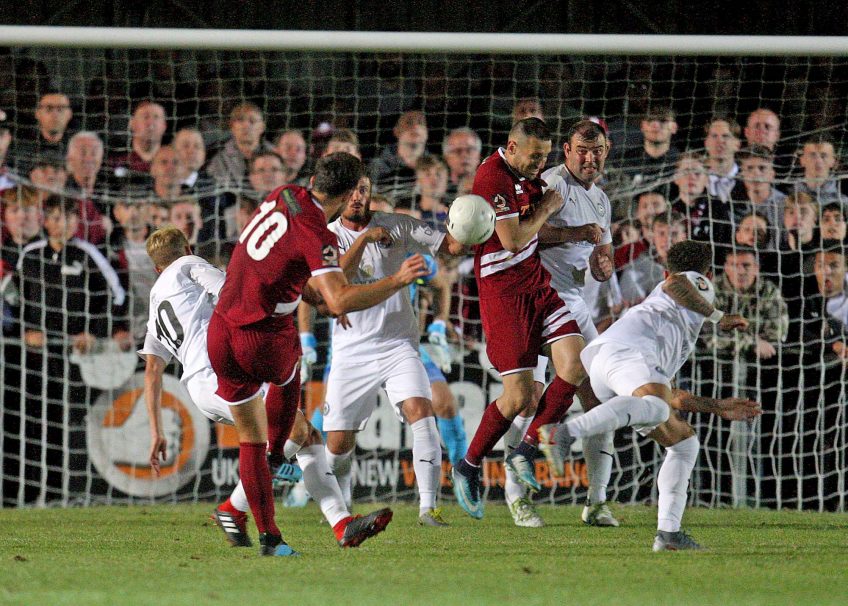 Seemingly lending credence to the Charles Hughes school of thought that most goals are scored from three passes or fewer, Billericay loaded the artillery and aimed for the patrolling Rhead.

One such diagonal ball launched by left-back, Callum Kennedy, would find its target as the burly striker glanced a header towards goal. Having stolen a march on the home back-line, Sam Deering could not bring the ball under control as it bounced off the top of his boot after skipping up off the surface. 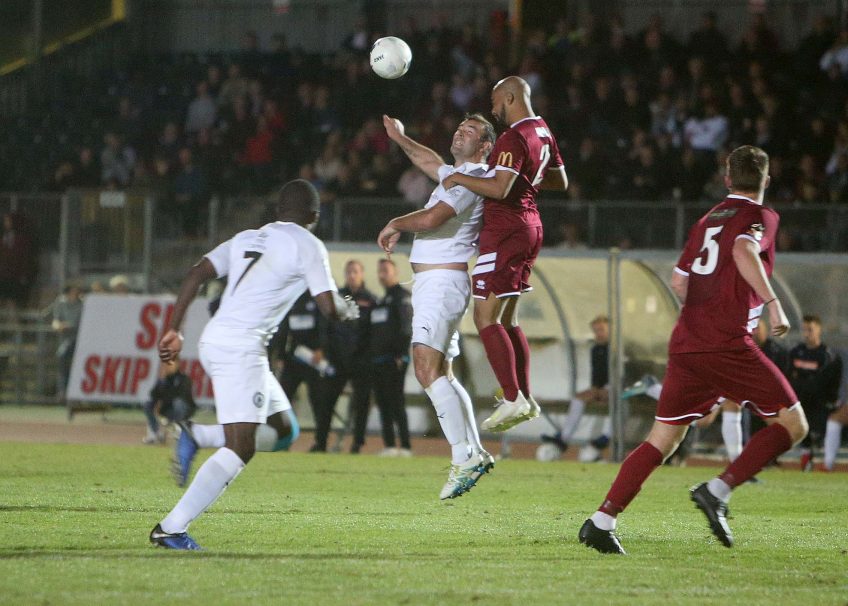 Billericay’s Matt Rhead competes in the air against the Chelmsford defence. Courtesy: @nickyhayesphoto

Chelmsford struck back as Omozusi picked up possession, gliding past Craig Robson, to play in Chris Whelpdale on the right flank. Sending an inviting ball into the Billericay penalty area, Knott’s miscued volley fell perfectly into the path of Simpson, lurking in the six-yard box. To the relief of the visiting defence, the opportunity was spurned as the chance flew wide of the post.

It would not be the last we saw of the impressive Knott. Providing ample reminders of his pedigree, he once featured in the Premier League for Sunderland and spent two seasons at League One, Bradford City.

On 26 minutes, Billericay’s Moses Emmanuel brought some excitement to a cagey opening period, scampering forward on the left hand-side, bidding his farewells to Omozusi, as he homed in on the opposition penalty box. 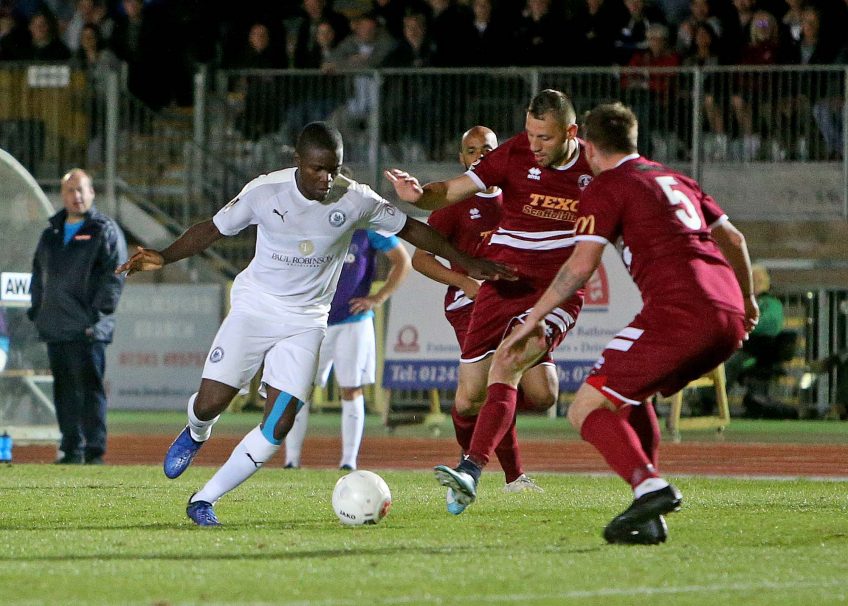 In what would prove to be a dress rehearsal for his golden moment later in the match, the striker’s radar was slightly awry on this occasionas his strike skimmed narrowly wide. With his pace, and willingness to seek to beat his man, Emmanuel was easily the visitors main threat.

With the busy Church and, stationed only just in advance of the home defence, Oliver Muldoon quick to win possession back, the Blues were almost caught on the break. With the long pass to an isolated Rhead ultimately falling out of reach of his team-mates, a packed Chelmsford defence were able to retrieve the ball and launch attacks of their own.

Adept at springing forward through central areas, carelessness from Billericay’s Robson, who gave the ball away, saw Waldren obliged to take a yellow card as he halted Knott’s passage towards goal illegally.

Knott would go close on 39 minutes, registering the significant statistic of that precious commodity, a shot on target, that was saved by Julian. With a tendency to lose his balance rather easily, the Claret midfielder did cause some consternation among the Billericay ranks as he sank to the floor a little too readily in their eyes. Ramsay would pay the price with a cheap yellow card in the first half for a minor indiscretion on the ex-Concord player.

The resultant free-kick saw the ball dispatched to the back post, which became an enduring theme throughout, as aperceived weakness had clearly been identified by the Clarets’ management team. Thankfully, the referee’s whistle curtailed what looked to be a golden chance from close-range for Wraith due to a perceived infringement.

Much like the departure of any mother-in-law after a Christmas visit, nobody bemoaned the end of the first half. Both sides re-started proceedings by demonstrating their respective expertise at the long diagonal ball through Billericay’s Gunning and subsequently home favourite, Spillane.

Mercifully, the cut and thrust of the competitive derby match would yield a much more entertaining second period, punctuated with a host of chances as players tired and the game opened up.

Conscious that Billericay were two yellow cards in front and perhaps with concern that home commitment levels could be called into question, Church did his bit to show engagement by going through the back of Deering for no apparent reason.

With Knott providing his own personal tribute to the Tchaikovsky ballet score with his version of Swan Lake once more, a dangerous free kick on the right hand side was won.

To Billericay’s surprise, the Clarets dusted off the “swing it over to the back stick” routine where the queue of attackers waiting to score was led by Church who nodded home from close in.

Lax marking in the visiting defence will likely infuriate the management team as, irrespective of the many personnel changes in that department, the fallibility at set pieces continues. Aspirations of regular clean-sheets remain an extremely challenging proposition on this evidence.

With pressure being exerted by the Blues in search of an equaliser, Rhead earned a free-kick that Parkes was unlucky to see take a deflection off the wall to divert to safety.

With a goal a necessity, Wheeler took a less cautious approach sending on Robinson to form a front two, sacrificing a defensive midfielder in Robson. With Loft replacing the carded Waldren, relief that the threat of being reduced to ten appeared to have receded proved sadly to be overly optimistic.

No strangers to the red card this season – with Eyong and Wassmer the guilty parties – this particular sanction did feel the most unjust in the circumstances. The unfortunate Ramsay, on a tightrope after his previous misdemeanour, mistimed an intervention on Frazer Shaw, earning the referee’s marching orders in the 68th minute.

Leaving the Blues in hot water, the unfortunate right-back departed to sample the real thing back in the changing rooms. 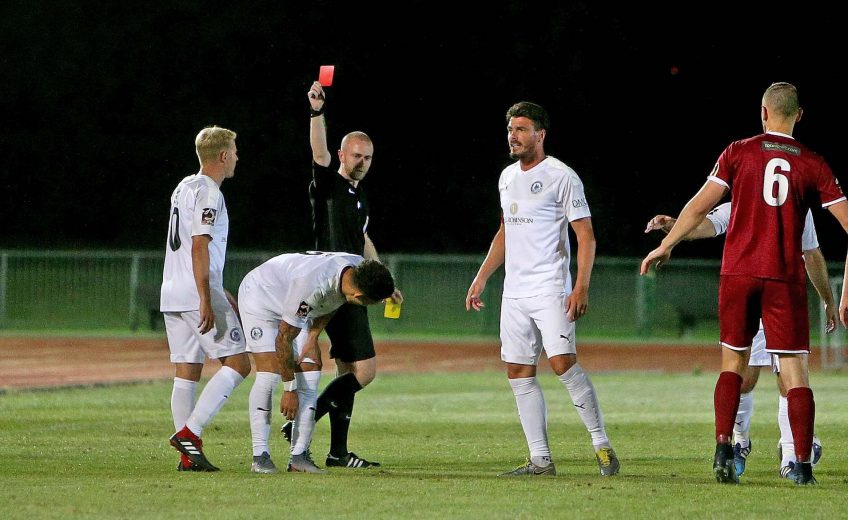 To everybody’s surprise, Billericay equalised. “Cometh the hour, cometh the man” as Emmanuel the Saviour strode down the right and advanced towards Carl Pentney’s goal.

There would be no mistake this time as the speedy striker lined up his angled drive into the far corner of the net to secure  an improbable leveller. Visibly taking heart from the Billericay sending off, it looked like Chelmsford had convinced themselves briefly that the game was in the bag and momentarily relaxed. 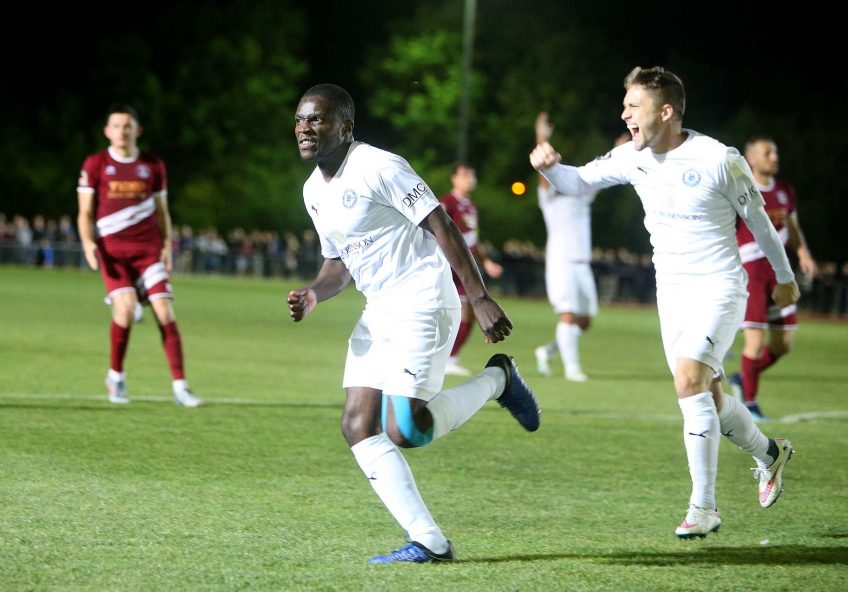 Back came the Claret army storming forward in indignation at conceding against a wounded opponent. Reaching for the armoury, the trusty weapon that is the far post cross was unsheathed. Untouched, the ball drifted wide but offered plentiful encouragement that it could well be the right answer to the question of how to achieve the breakthrough once more.

Shaw, effective all night with forward runs, galloped into Billericay territory once more. Finding Simpson, his snapshot was blocked, Whelpdale took up the cudgel but his effort also foundered on the defensive cover. Not to be denied, the opportunity fell next to Wraight who let fly a volley that demanded the athletic best of keeper, Julian, flying to his right to pull off a stunning save.

With the match now descended into a form of attack versus defence, Wraight again shot for goal but could not find the net. With the ball swung into the Billericay penalty area, an alarming amount of headers were being won by the Clarets with, yet again, that far post ball well defended by Parkes.

Deciding to take the initiative, Julian left the sanctuary of his goal to claim balls that his defence should have been clearing, which helped relieve the pressure on more than one occasion. 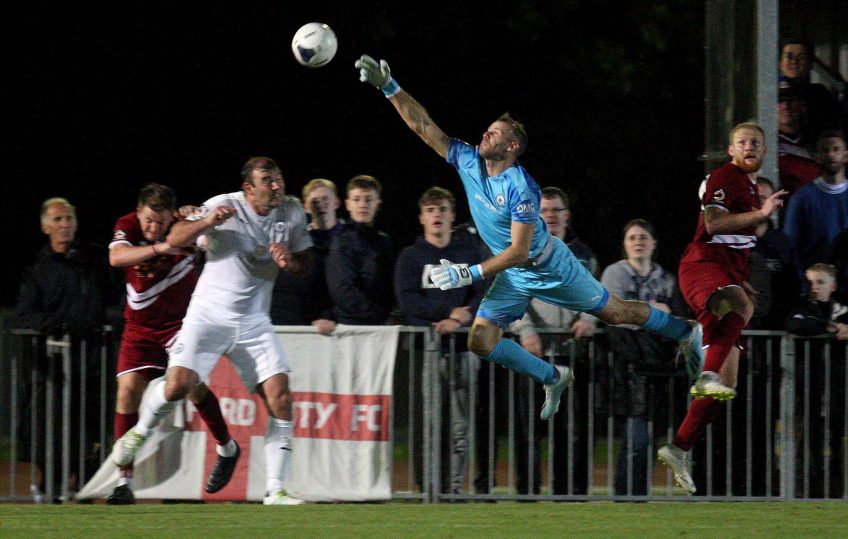 The last action of the game almost saw Billericay snatch victory as for a split second it looked like Robinson would sneak through on the break. The alert, Pentney, was quick to counter the threat and, racing from his goal, the Chelmsford keeper ensured that there would be no twist in the tale.

With the referee’s whistle bringing the match to a conclusion, the point came as greater solace to a Billericay side that can consider themselves very fortunate to snatch a draw while reduced to ten. Chelmsford will consider themselves to have dropped two points and were marginally the better side on the night. In truth, two workmanlike teams were set up by their respective managers not to lose and, in this respect, objectives were achieved.

With an away record that needs drastic improvement, a point from a local derby away from home is a good result for the Blues. Home form, and favourable results on Tuesday night, has propelled Billericay to second in the table.

However, there will be tougher tests to negotiate at home than the likes of Hungerford and a step-up in the level of examination begins with Bath City on Saturday.