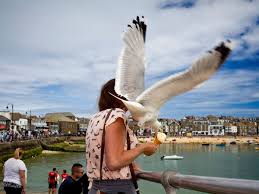 We started out today by looking at a drug bust at a festival in Sweden which went awry as a result of the intervention of a thieving seagull.

It seems that for all its liberal attitudes, Sweden has some of the harshest drug laws on the planet, and being in possession a single joint can result in a 6 month prison sentence as well as heavy fines, so you can imagine the panic experienced by one individual when he spotted two plain clothes officers on patrol at the Gothenburg Cultural Festival, poised to arrest a woman smoking marijuana.

The man seated on a nearby bench concerned about his own recreational activities, chucked his bag of weed away from him, a move that was almost inevitably spotted by the eagle-eyed officers.

Momentarily turning their attention away from the woman smoking the joint they headed purposefully towards the man who had attempted to distance himself from his haul..

But heavenly help was at hand, since as the officers reached down to grab the bag, which they had estimated to contain some 10 grams of weed, a punk rock seagull swooped down and snatched the haul in his beak and flew off with it.

Seems that’s one bird that is going to be really “flying high”!

As quickly as the seagull disappeared, so did the man who’d thrown the bag away. Meanwhile the policemen stood by helplessly watching as the evidence disappeared into the sky.

Unfortunately for the woman with the joint, there were apparently no other chip butty fiends in the vicinity willing to lend a beak.

She was arrested for use and possession, with the spokesperson describing her arrest as ‘a patch over the wound’.

In the second hour I was joined by MARGARET MILLS for her monthly book club feature. 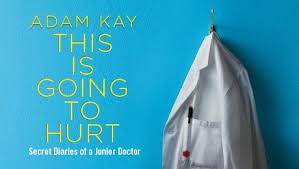 Previously Margaret has tended to look at fictional books, but today Margaret took time out to look at a book written by a former NHS doctor, especially concerning the experiences he encountered during the period of his training.

The book takes the form of a diary that it was recommended to compile as a “reflective practice” in which he could log any interesting clinical experiences.

Upon its release in September 2017, This is Going to Hurt was widely lauded for the infusion of comedy it had while also spreading awareness of the lives of junior doctors, however there were also a number of fiercely critical comments from other readers.

So to which camp did Margaret have most affinity?

If you missed out, listen again here to find out:-

On that note I’ll leave you in peace – well at least until tomorrow afternoon at 1pm,
Scott