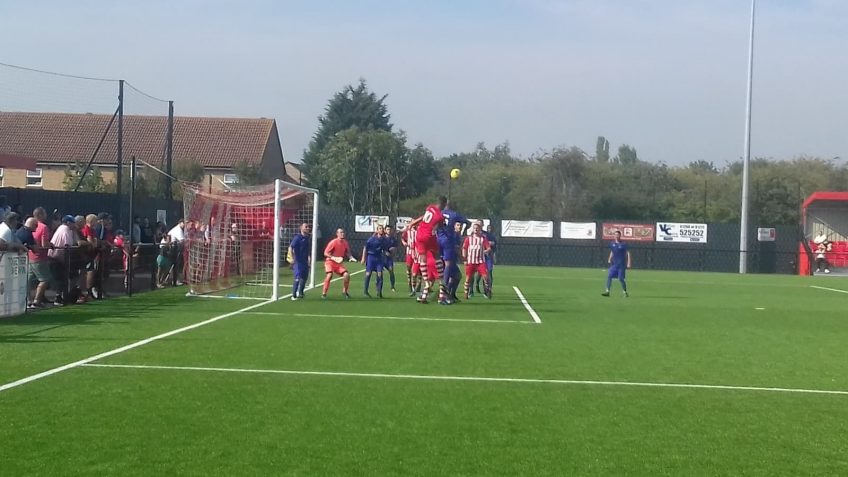 Bowers & Pitsea are in the hat for the 1st Qualifying Round after overcoming the brave challenge from Barkingside. The visitor’s had made a decent start to life in the Eastern Senior League South following last season’s harrowing campaign that saw them relegated from the Essex Senior League. The hosts meanwhile had made a decent start to their inaugural Bet Victor Isthmian League Premier campaign, but all that aside with three divisions difference between the sides meant that it was always going to be a hard ask from the visitors if they were going to follow the shock result they pulled off last time around against Stansted.

It was no surprise then that the hosts got into Barkingside straight from the offset, taking only 6 minutes to break the deadlock. The goal came via a Tom Hine cross, which was met by a Luke Hurst shot, which was saved by Charlie Howsam but Lewis Manor finished the job off by rifling home the rebound from close range.

Barkingside were at least able to win a corner soon afterwards, before Bowers again were on the front foot and nearly doubled their lead when Dan Trendall was placed through but he couldn’t keep his shot down.

The one-way traffic continued as Manor had a shot hit the bar, then had a header tipped over the bar by Howsam. Martyn Stokes also had a brace of near misses; firstly a shot was parried by Howsam but Stokes had a second bite with the rebound which clipped the post.

Barkingside had perhaps ridden their luck a little, and were perhaps fortunate not to have been out of sight and mind inside the opening 20 minutes. However they found a way to stem the Bower’s forward manoeuvres before equalising with their first chance in the 24th minute. The goal came from nothing as Berken Berlindir managed to dispossess a Bowers player, before going on a run that ended with him a long pass to Francesco Balestrini who unleashed from just outside the box that left Charlie Chafer with no chance.

However the hosts were back in the lead in the 33rd minute when Manor picked his spot with a shot that eluded Howsam and ended up in the bottom left hand corner of the net.

Manor almost completed his hat-trick in Bowers’ next attack, but was denied by Howsam’s fingertips. The resulting corner was met by a Stokes cross shot that whistled ominously close to the target.

Bowers passed nicely at times, but Barkingside dug in at times and almost equalised moments before the break when Joe Oates capitalised on a defensive error and curled a shot past Chafer that very nearly crept in at his right-hand post.

The players probably needed the break, the weather was scorching hot and it was no surprise that there had been water breaks during the opening 45 minutes. However once the second half started both teams got down to business with Trendall forcing Howsam into an early save; meanwhile Barkingside returned fire with Balestrini having an effort tipped away by Chafer.

But perhaps the heat was starting to take its toil as it took until the 57th minute for the next bit of goalmouth action. On that occasion Max Cornhill was having a shot from distance that the Side stopper saved comfortably enough.

Barkingside were still chipping away though and on the hour mark Ben Clark weaved his way into the host’s box and layed off Oates whose shot was blocked by the Bowers defence. David Knight at least forced Howsam to get down low when he had a shot in the 69th minute. However the Side keeper made an error soon afterwards when he came out to claim a ball, failed to make contact and Knight was able to get a shot on target that required Jordan Meikle to save his keeper’s blushes by knocking the ball away for a corner. Knight again had another crack when the corner fell kindly to him and his shot was only narrowly wide.

Barkingside kept their composure and 12 minutes from time were level courtesy of Ali Rajim who placed a shot past Chafer. Was a shock on the cards: the very least a reply?

Sadly for Barkingside they were to be level for a mere 60 seconds as Knight, who had been a real live wire since coming off the subs bench, picked up a ball just inside the box and drilled it past Howsam to put Bowers in front for the third time.

There was to be no comeback for Barkingside as in the 85th minute Bowers were able to extend their lead as Quentin Monville had a shot from the right that went in off the post. In the closing stages Howsam prevented Bowers extending their lead even further as he parried a James Thomas shot.

In his programme notes Rob Small said that Barkingside would be tricky customers, and they certainly proved that. Having had to weather an early storm the Step 6 outfit at times matched their Step 3 opponents