On Monday 16th July, Billericay Town make the short trip to Thurrock to take on Isthmian League North side, Aveley FC, in their second friendly match of the current pre-season. BTFC enjoyed an impressive work-out last Saturday in the searing heat to earn a 1-1 draw at National League high-flyers, Ebbsfleet FC. 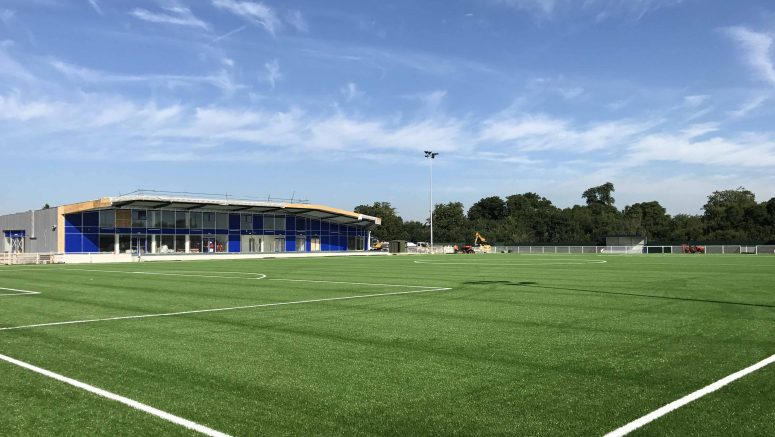 Ambitious Aveley take on Billericay in what will be, if we exclude the reserve side that lost to AFC Sudbury, their fifth match of pre-season. A comfortable 4-0 home victory over Thurlow Nunn outfit, FC Clacton, last Thursday (5th July) was followed, last Saturday, by an impressive showing, at home, in a 2-4 loss versus National South side, East Thurrock United. Dartford, also of the National South, however, provided a stern test for the Millers at Parkside on Monday night, as a strong side recorded a convincing 6-0 victory. The Millers friendly game v Southend United on Thursday night took place after this article was written.

For me, it’s impossible to write about Aveley FC without waxing lyrical about the fantastic, state-of-the art £4.8m stadium located a stone’s throw away from the Old Mill Field. Opened for the start of the 2017-18 campaign, it is entirely funded by the sale for housing of the previous site. It is with great credit to those involved at Aveley that their efforts ensured the story has a happy ending. Many clubs forced into selling their prime asset to support a move to another location have subsequently ended up homeless and been forced to ground-share to survive.

The new facility, which puts the Millers firmly on the Non-League map, also boasts a full size grass pitch beyond the main ground. In addition, 7v7 and 9v9 training pitches make this a valuable community asset. All facilities are used by the burgeoning academy and newly formed Aveley FC reserve side. The team, which plays in the Essex Senior Reserve League, is designed to offer a path into the first team via the impressive youth set-up. Over time, a production line of talent driving the club forward and sustaining its future is a clear possibility.

Blues fans will know Parkside better than most and are very grateful to Aveley for use of the facilities last season. Due to the problems of the inclement weather and draining issues with the pitch at the AGP, the Millers came through in our hour of need. With home games against Dorking, Harrow Borough, and Tonbridge Angels moved to Aveley, plus the bonus of a visit to see the Velocity Cup final, the South Essex stadium become a “home from home” for a while.

Whilst it’s impossible not to like a ground at which you have a 100% record, I was very impressed with the whole set-up of the 3,500 capacity stadium. With a large function room, very wide bar-area, which guarantees prompt service at the busiest of times, and excellent vantage points to watch the match in comfort, this is the very top end of Non-League football comfort. Add in that some of the friendliest people you could hope to meet are always on hand as volunteers and you have a great combination for any football fan.

Moving back to the football, Aveley clearly don’t want to have the best stadium in the Isthmian North where they have resided since being relegated in 2011/12. With eyes on the greater prize, the club have expressed an understandable aspiration to be at National South level within a three-to-five year time-frame. After a slow start last season, and change of manager in October 2017, the club improved in the second half of the campaign to finish out of danger in 14th.

With manager, ex-Brightlingsea Regent boss, James Webster, now able to benefit from a full pre-season with the players, and bring in a number of individuals to bolster the team in certain areas, Millers hopes of promotion are high. Webster’s track record of four promotions in seven seasons at Regent, and an Isthmian North title win in 2016-17, supports expectations. For 2018-19, Aveley have been installed as one of the early favourites to win the Isthmian North League and, in Webster, have a man that knows how to get promoted and win titles.

Retention and recruitment for the new campaign at the Millers has been impressive. Keeping leading goal-scorer, Alex Teniola, with 24 goals (12 at Thamesmead Town) last season, and proven at this level, is good business. In attack, ex-Regent hit-man, Tom Richardson, stays on to add threat up front and, after an injury-hit season, a fully fit Tony Martin provides an additional option. Whilst there have been more changes in personnel than usual, centre-back and skipper, Connor Witherspoon, and defensive partners, Ryan Cosson and (now also coach), Chris Bourne add continuity and solidity at the back.

In terms of new faces at Parkside, there are some exciting names to consider with a focus on young, promising players, often with a Brentwood Town connection. We highlight, Andy Freeman, at 21 years old, an exciting, goal-scoring attacking midfielder that has joined from Concord Rangers. With pace looking to be a key theme, two young full-backs have also been recruited. Harry Gibbs, aged 20 years, who can operate at right-back, returns after leaving last year. On the left, Sam Cross, 23, joins from current tenants, Grays Athletic. Further forward, pacey experienced winger, Marcus Milner, also joins from Ware and ex-Regent man, James Love, offers versatility across a number of positions.

Retention and recruitment at Billericay Town has also gone well and manager Harry Wheeler’s pre-season call for pace up front seems to have been answered. Speedy winger, Moses Emmanuel, joins from Sutton Utd and young right winger, Connor Hunte, 20, is an intriguing possibility if he can produce his talent regularly. Many liked the look of ex-Dagenham youth product, Jordy Mungoy, on the right of midfield who impressed in 45 minutes at Ebbsfleet. With experienced League campaigners such as Callum Kennedy, Jake Howells, and Simon Walton coming into the first X1, competition for places looks like intensifying.

With the emphasis still on gaining fitness, getting minutes under the belt, and impressing the respective bosses sufficiently to forward the claim for a place in the starting X1 come the time of the big kick-off, performance is more important than result. That said, I’m sure Aveley won’t want a repeat of the Dartford experience.

All that remains to be said is if you haven’t got to see a game at Aveley yet, don’t delay, it is an excellent football experience. As always, enjoy the game!