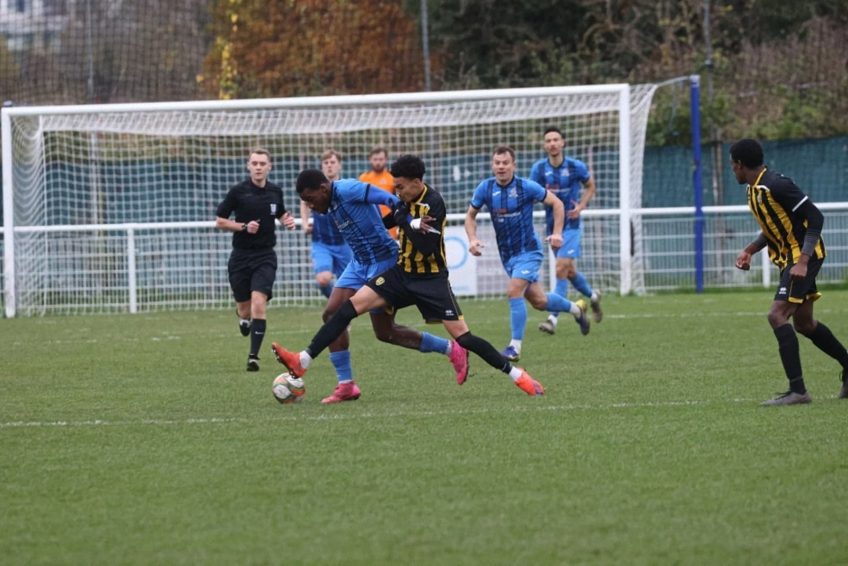 Four became two as Athletic Newham and Saffron Walden Town both scored five on route to the 3rd Round of the FA Vase. Cockfosters and Stansted saw their Vase campaign hit the buffers however. Athletic Newham came through an 8 goal thriller with Pagham, taking only two minutes to break the deadlock when Jaildson Seidi hit the net. Joel Appiah notched on 18 minutes, with Richard Kone scoring the third goal for Athletic Newham just before the break to give his side a 3-2 half time lead after the visitors had managed to score twice themselves via Jack Langford and Ryan Morey. The visitors then levelled up via Joseph Clarke, but with penalties looming the hosts then scored twice, the first in the 90th minute with Appiah scoring his second of the game, then Tony Cookey took the game beyond the Sussex side. Saffron Walden Town saw off Cornard United with Gavin Cockman scoring twice, alongside goals from Stanley Leech, Khristopher Oti and Matthew Hurley in the 5-1 win. Stansted were dealt a very cruel hand, leading 1-0 after Jack Mitchell handed them a 64th minute lead, the Airportmen then saw Josh Hazell equalise with a penalty in stoppage time, which was a precursor of what was to come as the hosts went on to win the penalty shootout 4-2. Cockfosters meanwhile were beaten 4-0 by Tring Athletic who opened the scoring in the 7th minute via George Carbery. John Smith and Emmanuel Gbejaude added to the tally, with Carbery then scoring his second six minutes from time to complete the whitewash. The Errington Challenge Cup kicked off this weekend and for Ilford it was a case of an early exit after being beaten handily by Walthamstow. Yemi Adelani bagged a hat-trick in the 4-0 success, with Connor Scully snaring the other goal. Stanway Rovers also made progress as they beat Little Oakley 4-2. Ernest Okoh scored a brace, with Lewis Francis and Ezequiel Franchi also getting on the score sheet. Dan Garrad scored both Little Oakley goals but it wasn’t enough to prevent his side bowing out at the first hurdle. Sawbridgeworth Town and St Margaretsbury couldn’t find any goals in normal time, so had to decide their tie via penalties where the Robins held their nerve to win the tie 4-2. Penalties were also required in the Takeley v Clapton tie. Theo Campbell notched for the hosts, but the hosts also put through their own net to give Clapton their goal, and the Tons then rubbed salt in the wound by going on to win the game 3-2 on penalties. Penalties were also required in the Peter Butcher Memorial Trophy game between Hoddesdon Town and West Essex after normal time had ended goalless. West Essex booked their place in the next round via a 3-2 penalty win. Ibrahim Kehinde scored both the Redbridge goals in their 2-0 win over Southend Manor, which also saw the Motormen using two keeper’s as George Martin played one half, with Michael Corderoy the other. Teddy Collis and Harry McDonald scored their goals within three first half minutes to put FC Clacton 2-0 up, but Luke Woodward pulled one back just before half time. The second half saw the hosts put the visitors under the cosh, but heroic goalkeeping and defending saw the visitors hold on to their lead and with it a place in the next round.