In tonight’s show hosts Andy Gilson, Trevor Singfield, Barry Galvin and Darin Burrows are in the studio and Christian Wheeler on the phone from Spain discuss the recent pre-season friendlies games and other goings on in and around E10.

This week also has the last round of The Orient Hour Quiz with contestants Les Kaye, Steve Jenkins, John Williams and Martin White. Who do you think will make it to the final? 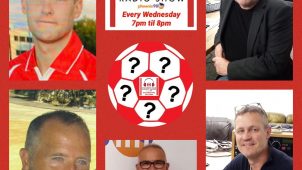