Is this what you’d call “wrap around food”?


Today we heard about the woman who was served with a battered and fried towel and of the dangers of buying at an auction if you can’t understand what the auctioneer is saying. 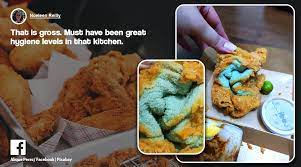 Now at least this didn’t happen here in the UK BUT Alique Perez had a shock when she tried to cut up a portion of chicken she’d ordered for her son from a take-away outlet in the Philippines.

Instead of the chicken she found that the order as delivered was actually a deep fried towel.

“This is really disturbing… How the hell do you get the towel in the batter and even fry it!?!?”, she said.

The company involved, Jollibee said that they’ve been forced to close the branch in Bonifacio Global City for three days in order to “review its compliance with procedures” and “retrain its store team”.

Meanwhile back in the Uk we learnt how understanding regional accents can be important.

Now as it happens I remember many years ago stopping off at a country pub just outside Reading and finding myself unable to understand a word emanating from a country yokel – and that’s only about 30 miles west of London!

So have sympathy for the Canadian couple, Cal Hunter and girlfriend Claire Segeen who decided to start a new life in Scotland.

Claire was at home in Canada when Cal went to an auction to try and buy them a flat, but he soon found himself in deep water.

He had already been battling to make sense out of the auction brochure as quite a few lots weren’t actually included, but he really came unstuck trying to cope with the auctioneer’s broad Glaswegian accent.

He eventually put up his hand to place a bid on a property in Sandback, Dunoon, but found that – to his surprise – no one else seemed keen.

The property was a little further out from Glasgow to where they were intending to commute – about 90 minutes if you take the ferry, but Cal phoned Claire to ask if she was happy with the £10,000 sale he’d mistakenly got them into, but as his phone battery was dying they had to make a quick decision. 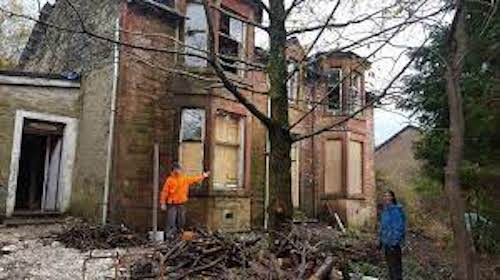 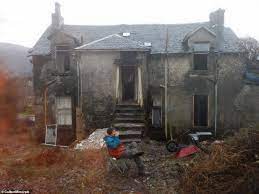 Apparently it is a ‘stone building from around 1900’ and located in Sandbank, a ‘small loch-side village’ nestled adjacent to Trossachs National Park.

The roof has gaping holes that have left the timbers exposed which after years of West Scotland rain had rotted away, and drainage issues have also left the land waterlogged, leading to serious structural problems caused by subsidence.

Local councillors have advised them to knock it down and start over.

Nevertheless they say they are ‘excited’ to take on the ambitious project, and have set up a GoFundMe page to help raise money – having already raised more than £17,000 towards the renovation.

Good luck with that then – and with the twice daily commute to Glasgow!

My journey home should be a whole heap easier and I look forward to your company again tomorrow,
Scott