A tale of two hotels


We’ve all heard of Charles Dickens’ TALE OF TWO CITIES but today we looked at tales of two very different hotels.

First up we reported on the news of the enforced closure by Chinese authorities in the Longhua district of Shenzhen of two somewhat unusual hostelries which were opened 2 years ago by a 34-year old Chinese entrepreneur, Mr. Li.

The establishments marketed as “DOLLY PARLOURS” were directly aimed to cater for the needs of the 120,000 men working in the district’s high pressure factories, where opportunities for real life female companionship were extremely limited.

Both privately owned and rented dolls have become increasingly popular in China, particularly since the COVID pandemic has restricted more conventional relationships!

It seems that most Chinese cities sport at least one such hostelry, all of which are reportedly doing a roaring trade.

But that very success has clearly rattled some cages in high places as authorities are increasingly concerned of potential infections resulting from poor maintenance or cleanliness.

Naturally Mr Li claims that his venues operate to the highest standards of hygiene and that the authorities have provided no reasons for the enforced closure, which actually occurred whilst one of his clients was literally caught with his pants down, whilst making use of the facility!

Meanwhile it seems that there is quite a lot of pressure being applied by former guests to have the hotels back in operation as soon as possible.

And now, as they say, for something completely different! 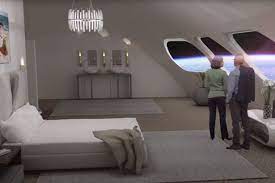 News has just emerged of plans to open a new hotel which is quite literally “out of this world”.

There won’t be any problems with space as the hotel is to be built –  in space!

Already in the planning stage, it’s hoped to get construction under way by 2025 with the first guests being welcomed in 2027.

The backers aim to cater for up to 400 guests who will be able to access bars, restaurants, a health spa, cinemas, libraries, concert venues, and Earth-viewing lounges.

As it will rotate around the Earth every 90 minutes, breathtaking views are guaranteed.

It won’t be in complete zero gravity and instead will resemble being on the moon because regular folk won’t be able to spend prolonged periods of time completely weightless without proper training. The whole mega-project is expected to be ‘a rotating space station designed to produce varying levels of artificial gravity by increasing or decreasing the rate of rotation’.

Sponsors of the project, The Orbital Assembly Corporation says on its website: “The hotel will be designed from the start to accommodate both national space agencies conducting low gravity research, and space tourists who want to experience life on a large space station with the comfort of low gravity and the feel of a nice hotel.”

There will be individual pods that are attached to a rotating wheel, with long tubes that connect different parts of the station.

The outer ring will be ‘the backbone of the station and provide mounting for habitable modules, solar panels, radiators, and a rail transport system’ and will be where people will be able to move about the station. The inner ring will serve as a docking hub.

While some of the pods will service the hundreds of hotel guests and staff, there will be some sections sold to government agencies and NASA for research purposes.

No prices for guests have yet been revealed, but whatever they might be, don’t forget to add the cost of getting there!

Coming back down to Earth, I look forward to having your company again tomorrow,
Scott