It all happens in the USA!


I guess I’m lucky but I look back on the days of my childhood as days of innocence, and unless about to be faced with a major test at school, generally worry free.

Long sunny days playing cowboys and Indians and similar games with other kids.

I guess that “HIDE AND SEEK” was probably pretty much par for the course, back then.

Mind you if playing something like that it’s probably a good idea to choose your hiding place with care, something that apparently did not occur to 7-year old Elias Quezada, of Hillsborough County, Florida, whose chosen bolt hole was a wheelie bin. 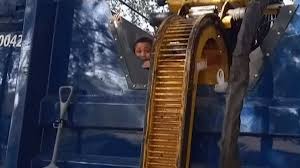 Now that might be OK unless it happens to be the rubbish collection day, which in Elias’s case it was!

Consequently when the rubbish cart arrived, the wheelie bin containing Elias was scooped up by the mechanical arm on the truck and emptied out in readiness for the contents to be compacted to pulp in readiness for transport to the main refuse dump.

Elias only escaped being mulched down as the driver happened to be looking at the camera inside the cab and spotted the little lad tumbling out of the bin. Mercifully he quickly switched off the truck’s rotor blade and called the emergency services.

Maybe he’ll be a little more selective next time!

Meanwhile also in the States comes news of a somewhat accident prone lawyer from Miami.

Yes, well 32- year old Stephen Gutierrez had his law licence revoked after it was claimed that he had staged a stunt whilst he defending a man on a charge of arson.

His client had been charged with torching his car to claim the insurance money, however just as Gutierrez suggested to the jury that the fire might actually have been the result of spontaneous combustion, smoke and flames to immediately started emanating from his own trousers, causing him to run out of the courtroom. 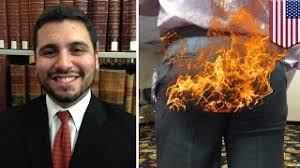 Whilst he subsequently blamed the coincidental event on a faulty battery in his electronic cigarette, prosecutors  suggested that the whole thing was clearly a stunt staged to try to persuade the jury as to the feasibility of his spontaneous combustion theory of defence.

Well our hero is in trouble again as it seems that after being pulled over for driving without a working headlight, an officer, noting a bulge in his pocket, and suspecting that he was carrying a knife, instigated a body search.

It turned out that the bulge was in fact caused by a metal cylinder containing a white powder, to which Gutierrez, blurted out,’That’s cocaine!’

This latest incident adds to the mounting woes for Gutierrez, who blamed his conduct on a myriad of personal problems and “a lack of experience and complete understanding of true meaning of zealous advocacy, rather than his honest or selfish motive.”

Well even if he manages to get his law licence back, I’m not sure he’d be a popular choice for potential defendants.

Right on that note I think it’s time for me to depart.