Big albums confirmed for release in 2021


The UK may be facing a strict lockdown for the first quarter of 2021, but thankfully, there’s plenty of exciting new releases to help us through…

You Me At Six – Suckapunch
The Surrey band say their seventh album, which features recent singles Beautiful Way and Adrenaline,

Zayn – Better Than Nothing
Zayn’s third album – announced just a week ahead of its release – features singles Better and Vibez.

Bugzy Malone – The Resurrection
The British rapper’s fifth full length project is shaping up to be his biggest yet after last year’s single M.E.N III became his first Top 20 hit. The album also includes Dermot Kennedy collaboration Don’t Cry – about his near fatal accident last March.

Bicept – Isles
Belfast-born, London-based duo Bicep say their new album represents a “snapshot in time”, with the tracks recorded in “home-listening” versions for the record, before evolving into new iterations for their live shows this year.

Drake – Certified Lover Boy
Announced last August with this slick trailer, expect Drake to be back on form after the mixed response to last year’s Dark Lane Demo Tapes.

Foo Fighters – Medicine At Midnight
Foo’s landmark tenth studio album arrives an entire year later than planned due to Covid, but it sounds like it will be worth the wait. Recorded in a haunted house in California, lead single Shame Shame is pretty much the opposite of what you’d expect from a Foos album header.

The Pretty Reckless – Death By Rock And Roll

Sia – Music – Song from an inspired by the motion picture
Accompanying Sia’s new co-written and directed film Music will be a 14-track collection of songs featured and inspired by the movie, including recent single Hey Boy.

Mogwai – As The Love Continues

Celeste – Not Your Muse

Zara Larsson – Poster Girl
The record features current single Talk About Love, while it’s not yet clear if recent singles All the Time, Don’t Worry Bout Me, and Love Me Land will feature.

Thunder – All The Right Noises

Lana Del Rey – Chemtrails Over The Country Club
Lana Del Rey has been trailing her seventh studio album last October, which features Let Me Love You Like A Woman. Production on the record comes courtesy of Jack Antonoff, and longtime collaborator Rick Nowles on Yosemite.

London Grammar – Californian Soil
Frontwoman Hannah Reid says London Grammar’s third album is about her “gaining possession” of her own life, referring to misogyny in the music industry.

Blink-182
Travis Barker confirmed on Instagram that the band will release a new album in 2021.

Cardi B
Last August Cardi said in a US radio interview that she was plotting her next move after the global smash WAP, but was hesitant to give a release date until the pandemic is under control

Chvrches
The band confirmed they release their fourth album in the Spring, and that it’s sound is inspired by 80s legends Depeche Mode, The Cure and Brian Eno.

Doja Cat
Fans can expect a follow-up to 2019’s Hot Pink this year, if Doja’s recent Twitter comments are anything to go by. The singer and rapper told her followers to keep an eye on who she’s following on Twitter, suggesting she had collaborated with them on her next project – meaning we can expect The Weeknd, Ariana Grande, and SZA to pop up on her next project.

Kendrick Lamar
Kendrick has kept relatively quiet about when fans can expect new music, but given he was due to headline last year’s Glastonbury and British Summertime Hyde Park, we wouldn’t be surprised if he dropped the follow-up to his critically acclaimed DAMN. this year.

Lil Nas X
At last year’s Billboard Music Awards Lil Nas X quipped he will release the “best album of all time” in 2021, a follow-up to 2019’s 7 EP. We already have its first single, Holiday, released last November.

Lizzo
The star recently revealed during an Instagram Q&A that she has nearly completed work on her new album – her second major label record – which is expected at some point this year. Longtime collaborator Ricky Reed and Oak, who worked on her last album Cuz I Love You,  are involved again.

Manic Street Preachers
Work on the band’s 14th studio album appears to be well under way, after sharing some new track titles on Instagram.

Marina
The Welsh singer-songwriter shared the first taste of her fifth studio album last year, with the track Man’s World.

Rag’n’Bone Man
The singer-songwriter is following up his million-plus selling debut Human in 2021, with its lead single arriving at the end of January.

SZA
US singer/rapper SZA returned last September with the Neptunes-produced Hit Different and saw 2020 off with new track Good Days, which has become her biggest headline single in the UK. Despite some tweeted and deleted posts about the relationship with her label, it seems like a follow-up to 2017’s CTRL is imminent. 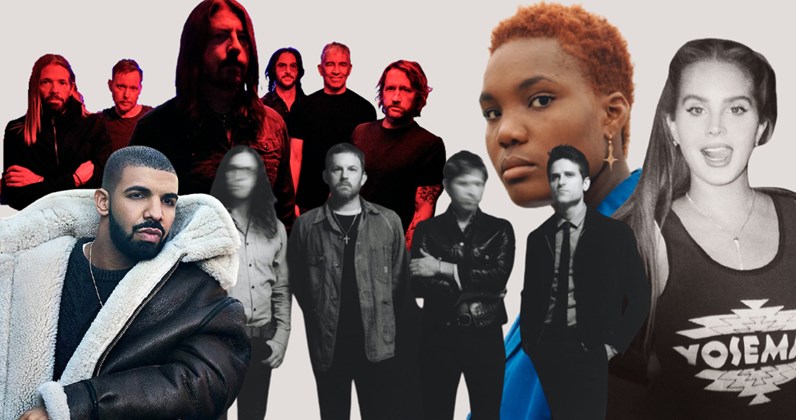