Could this be the ultimate in “panic buying”? 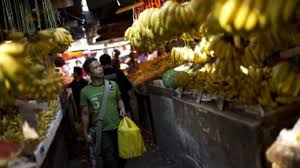 Over in Malaysia, the government has decreed that only “the head of the family” is allowed to leave the house to do the weekly shopping and in that country, the head of the house is deemed to be the man – which seems more than a little sexist to me!

Anyway this decision has apparently resulted in unintended consequences with unsupervised men suddenly struggling to distinguish between the bewildering varieties of vegetables, spices and herbs.

Pictures of men struggling with the shopping lists prepared by their other halves, and scanning the aisles searching for the required items have appeared on line.

One man said it felt like a treasure hunt.

Someone else said that men having to go and buy groceries on their own, was the ultimate meaning of panic buying.

One guy said he was dazed by the many possible choices of just red onions.

On returning home after taking an hour, rather than the usual 30 minutes, one man faced a barrage of questions as to why the visit had taken so long.

I know this feeling exactly, as whenever I’ve been despatched to just get a single item, I know before I even start that I’ll come back with the wrong one – whether it be potatoes, oranges, tomatoes, joints of meat, coffee or cream – and that’s even when I’ve called home and sent a picture of the item I intend to return home with.

Being a Tuesday, Margaret Mills joined me today to discuss a Chelmsford born woman – Anne Knight – a renowned abolitionist – against slavery, as well as being extremely active in promoting women’s rights.

Listen again here to what Margaret told me about this worthy individual: –