They’re all out there and living amongst us!


Today we reported on some truly incompetent law breakers.

You’d think that if you were doing something illegal, you’d want to keep as a low a profile as possible.

But apparently this did not occur to a Florida man who was found by US State Troupers to be driving a car at 25 mph over the speed limit.

When the car was searched they found a bag labelled helpfully as BAG FULL OF DRUGS. 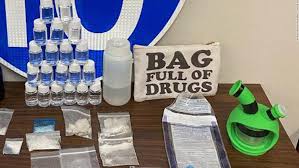 When asked about the contents the man reportedly replied, “No officer, this is just where I keep my cup, house keys and a Harry Potter  book.”

That’s almost as good as the man caught with cocaine on his nose telling police that it wasn’t his.

According to the Hillsborough County Sheriff’s Office, the driver of a car was pulled over for a routine traffic stop, and in the passenger seat sat a 20-year-old man.

Now usually these types of stops will focus on the driver and cops will be keen to see their licence and registration, but deputies Eneida Rossi and Abigail Bieber couldn’t help but notice the passenger had a certain strange substance on his nose.

A subsequent search yielded a small bag of powdered cocaine concealed on him. Although arrested without incident he still tried to claim that the cocaine on his nose wasn’t his!

Well I suppose it was worth a try!

Being a Tuesday, Margaret Mills was back with me and this week was looking back to the time when Alfred Lord Tennyson spent time in Essex.