Written by Michelle Ward in Eat My Brunch👁 773 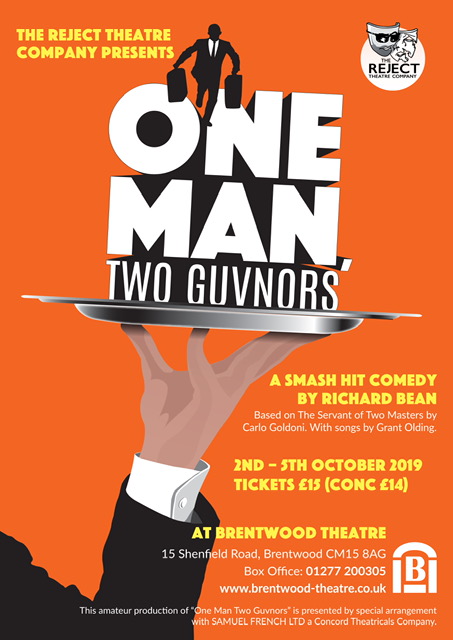 Michelle Ward was joined by Kevin Richard (Business Manager/Actor) and Barry Hester (Director/Actor) THE REJECT THEATRE COMPANY to talk about their production of ONE MAN, TWO GUVNORS running between 2nd – 5th October at the Brentwood Theatre.

A fabulously funny chat with two guys who just love the world of theatre and put on shows the same quality as a West End Production right in the heart of Brentwood (Brentwood Theatre).

A play by Richard Bean, an English adaptation of Servant of Two Masters a 1743 comedy play by the Italian playwright Carlo Goldoni. The play replaces the Italian period setting of the original with Brighton in 1963.

In 1963 Brighton, out-of-work skiffle player Francis Henshall becomes separately employed by two men – Roscoe Crabbe, a gangster, and Stanley Stubbers, an upper class twit. Francis tries to keep the two from meeting, in order to avoid each of them learning that Francis is also working for someone else. Complicating events, Roscoe is really Rachel Crabbe in disguise, her twin brother Roscoe having been killed by her boyfriend, who is none other than Stanley. Complicating events still further is local mobster Charlie the Duck, who has arranged his daughter Pauline’s engagement to Roscoe despite her preference for over-the-top amateur actor Alan Dangle. Even further complications are prompted by several letters, a very heavy trunk, several unlucky audience volunteers, an extremely elderly waiter and Francis’ pursuit of his twin passions: Dolly, Charlie’s feminist bookkeeper, and food.