A GREAT NIGHT FOR ENSIGN AS THEY MAKE HISTORY

What was already an historic night for White Ensign as they hosted an FA Cup tie for the first time ever, and was their debut competitive fixture at their new home in Great Wakering turned out to be extra special, as they progressed to the full Preliminary Round of the competition by beating Woodford Town in an epic replay.

Ensign had the first real chance of the game in the 9th minute when Conner Barnby ran onto a loose ball then advanced on the Woodford goalkeeper Alex Reed, before firing a shot which went narrowly wide of the post.

Then 4 minutes later the home side were in front after Woodford conceded a corner, from which Elliot Vile nodded a powerful header past Reed to make it 1-0.

Ensign continued to press, and Dominic Locke had a shot on 18 minutes but his finish wasn’t powerful enough to trouble Reed who gathered it comfortably.

Midway through the first half Asher Modeste had a good opening for Woodford but his shot was well over the bar.

Then on 26 minutes Temi Babalola hit the side netting for the East Londoners, who were cheered on superbly by a small but very enthusiastic band of supporters right the way through the match.

Then on 38 minutes Babalola got his side back in it, as he outpaced the Ensign defence and struck the ball past the advancing keeper James Parkins to bring the scores level.

There was controversy just before half-time when Ensign’s player-manager Brett Munyard looked to have been brought down in the box by Tola Odedoyin, but referee Lukas Wood waved play on and so the two teams remained deadlocked at the interval. 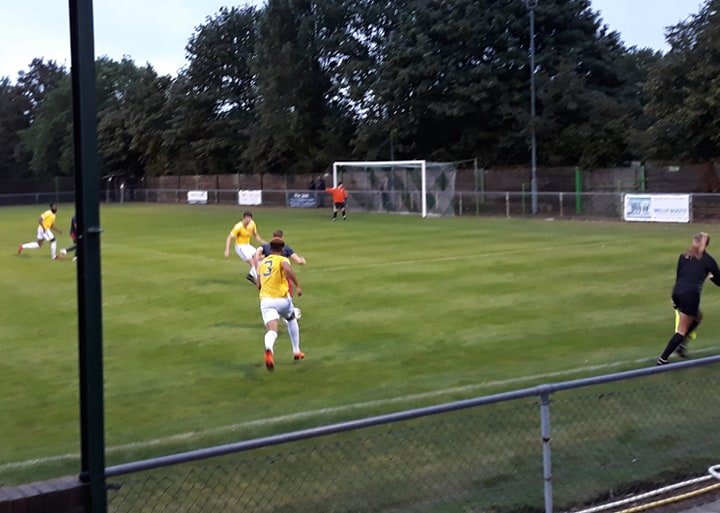 With 7 minutes of the second half gone Woodford had a great chance to go in front when they won a free kick just ahead of the penalty area.

Andrea Mantovani’s effort evaded the wall and was on target but was superbly pushed away by Parkins.

Then on the hour mark Ensign had a great chance of their own, when player-boss Munyard went on a quick run down the left wing and crossed for Locke at the far post, who only narrowly failed to connect.

Five minutes later Munyard was involved again, as having lured Reed to the edge of his area he got a shot past him which was cleared off the line by a Woodford defender.

Woodford themselves went very close to snatching the tie four minutes from the end, and an excellent save from Parkins kept the hosts in it before a rebound from Vlad Sighiartau hit the side netting.

But it was 1-1 at the end of 90 minutes so the match headed for extra time. 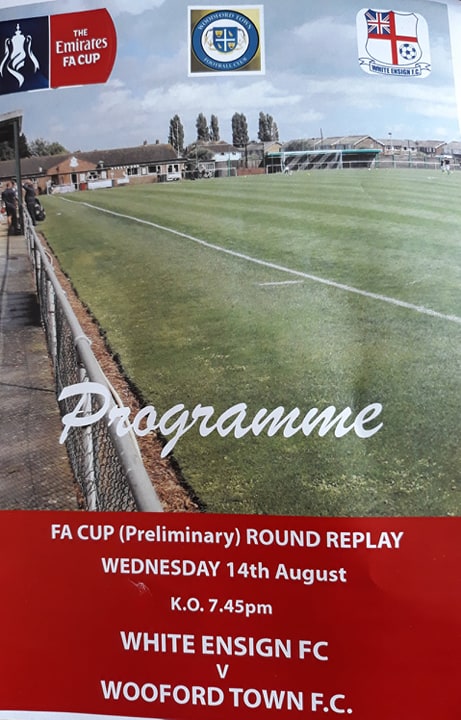 In the 6th minute of the additional half-hour Barnby hit the ball out wide to Locke – arguably Ensign’s best player on the night- who advanced on the penalty area but his shot was hit straight at Reed.

Woodford were then reduced to ten men after the second period of extra time commenced, when Odedoyin got his marching orders for a foul on Luke Skinner.

Substitute John Hilliard took the resulting free-kick, which was perfectly placed and curled around Reed to put Ensign in the lead.

Then Jake McWee sealed victory for the home team as he knocked the ball home to make it 3-1, but the drama wasn’t quite over as Barnby came close to making it four.

Then with extra time running out Vile received a red card after clashing with Babalola.

But despite that, it was a great occasion for Ensign who in the next round will face a trip to another Essex Senior League club in Takeley.

After the game I spoke with White Ensign’s player-,manager Brett Munyard and gathered his thoughts on the match, which can be seen here.