Written by Paul Golder in In The Papers👁 760 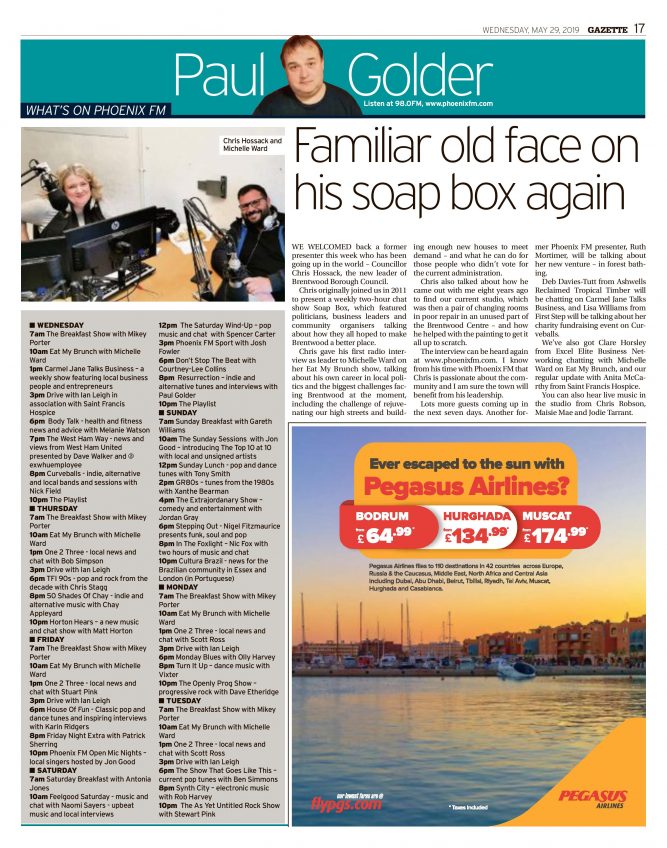 We welcomed back a former presenter this week who has been going up in the world – Cllr Chris Hossack, the new leader of Brentwood Borough Council.

Chris originally joined us in 2011 to present a weekly two-hour chat show Soap Box, which featured politicians, business leaders and community organisers talking about how they all hoped to make Brentwood a better place.

Chris gave his first radio interview as Leader to Michelle Ward on her Eat My Brunch show, talking about his own career in local politics and the biggest challenges facing Brentwood at the moment, including the challenge of rejuvenating our high streets and building enough new houses to meet demand – and what he can do for those people who didn’t vote for the current administration.

Chris also talked about how he came out with me eight years ago to find our current studio, which was then a pair of changing rooms in poor repair in an unused part of the Brentwood Centre – and how he helped with the painting to get it all up to scratch!

The interview can be heard again at phoenixfm.com. I know from his time with Phoenix FM that Chris is passionate about the community and I am sure the town will benefit from his leadership.

* Lots more guests coming up in the next seven days. Another former Phoenix FM presenter, Ruth Mortimer, will be talking about her new venture in forest bathing

* Deb Davies-Tutt from Ashwells Reclaimed Tropical Timber will be chatting on Carmel Jane Talks Business, and Lisa Williams from First Step will be talking about her charity fundraising event on Curveballs.

* We’ve also got Clare Horsley from Excel Elite Business Networking chatting with Michelle Ward on Eat My Brunch, and our regular update with Anita McCarthy from Saint Francis Hospice.

* You can also hear live music in the studio from Chris Robson, Maisie Mae and Jodie Tarrant.