Tonight’s Orient Hour is hosted by Andy Gilson who is in conversation with regular panel members Trevor Singfield and Lee Boyce. Also Billy Herring hosted a call with the majority of regular panel members made up of ex-players (Glen Wilkie and Barry Lakin), professional journalists (Steve Tongue), commentators (Barry Galvin) and regular supporters (Darin Burrows and Keren Harrison) who discuss the recent result and performance against Morecambe, the comings and goings in the January transfer window as well as their views on the season so far and who they think is in the running for Star Man 2020/21.

Don’t forget, the next fixture against Forest Green Rovers on Saturday is INCLUDED in your Season Card streaming pass. However, if you are not a Season Card holder and wish to subscribe to any of the forthcoming matches on the #OrientLive streaming service – Click Here to see the streaming passes on offer. 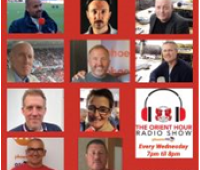