Welcome to a new series of articles on Billericay Town’s 2019-20 season. In Part One, we start with the disappointment of missing out on the play-off’s of the previous season, the Wheeler dilemma, resultant personnel changes, Tamplin’s search for new signings and the arrival of the “beast baller”. All set against the backdrop of the the pre-season  friendly program.

We may not be done yet on the season so rest assured, should it continue it will certainly be included. For now, enjoy a trip back to New Lodge this Bank Holiday and take a stroll down (recent) Memory Lane.

Billericay Town’s 2018/19 campaign had ended in disappointment with manager, Harry Wheeler, parachuted in late in the day unable to right a listing ship. Two wins in the last ten League matches proved insufficient to maintain momentum. A final day home reverse to Bath City ended the hope of extending the season as Billericay finished in eighth, one place short of the play off positions. 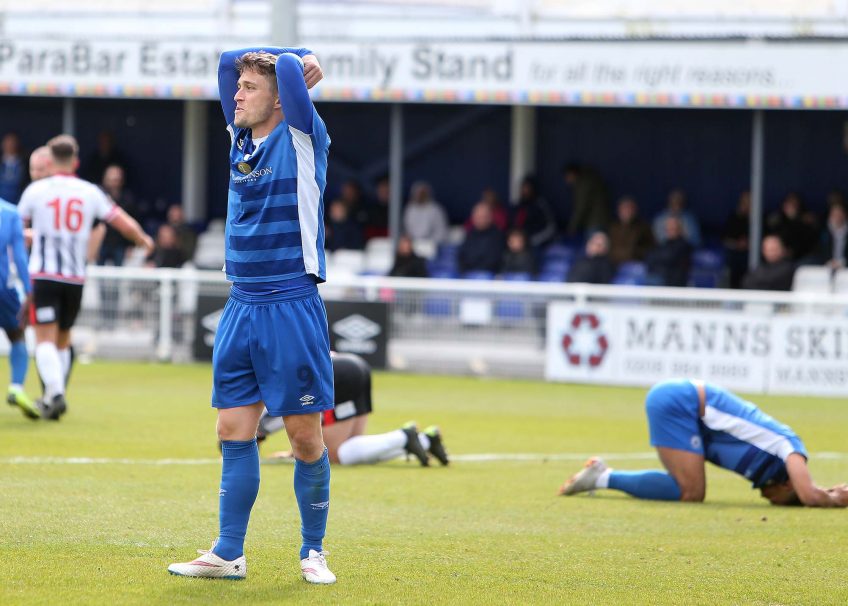 It would be different in future suggested Dan Groves, Billericay Chairman, in his mid-May end of season review. Owner, Glenn Tamplin, described in the update as “the glue holding everything together” had been absent for long periods during the previous campaign and his influence had been missed. Nonetheless, he stated, “the difference this season is we will have Harry for the whole season and Glenn Tamplin back as our glue”. By mid-September, it would all come unstuck. 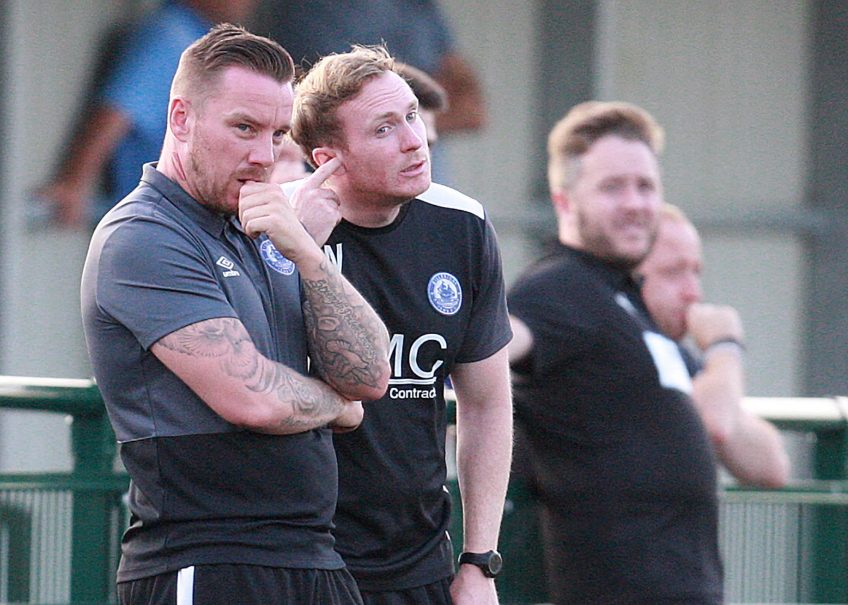 Wheeler’s survival as manager into the new season had not been certain. Since his return in January 2019, form had initially been good. The team reeled off victories and advanced to the semi-final of the Essex Cup. However, form subsequently evaporated and the key “play-off” objective had been missed. Having been sacked unfairly first-time round, Wheeler was rightfully given the benefit of the doubt over the summer and would have every opportunity to use the full pre-season to recruit a team and work extensively on team shape, tactics, fitness and strategy for the new campaign.

With news at a premium during the off-season of late May and June, the attention of the football fan turns to that vital document of interest – the retained list. With 13 players retained or offered deals and others, including Jake Robinson, “in talks” the fall-out after the previous campaign appeared light. Wheeler’s observation post Bath City that: “I put 5 names out of 24 that I wanted to keep. There are not enough characters or men in the team to get you through things …” had seemed to indicate a more brutal triage would be enacted. A number of players would subsequently depart.

Among those that did move on, left-sided, former captain Jake Howells and striker, Adam Coombes were the main surprises. One of the stars of the previous year, right-back Joe Kizzi would leave for National League, Bromley. Others such as Jamar Loza, Kieron Cadogan, Lloyd Doyley, Cole Kpekwa, Connor Hunte, Sam Kelly were all out of favour and were either released or elected to leave.

Treading a path to join previous manager, Dean Brennan, at Wealdstone, the quartet of striker Ross Lafayette, right-back Michee Efete, and midfielders, Connor Smith and Billy Clifford all headed for Grosvenor Vale. At the time, little could they have known they were leaving a squad that would at times be embroiled in a relegation fight whilst joining the team that would top the table. 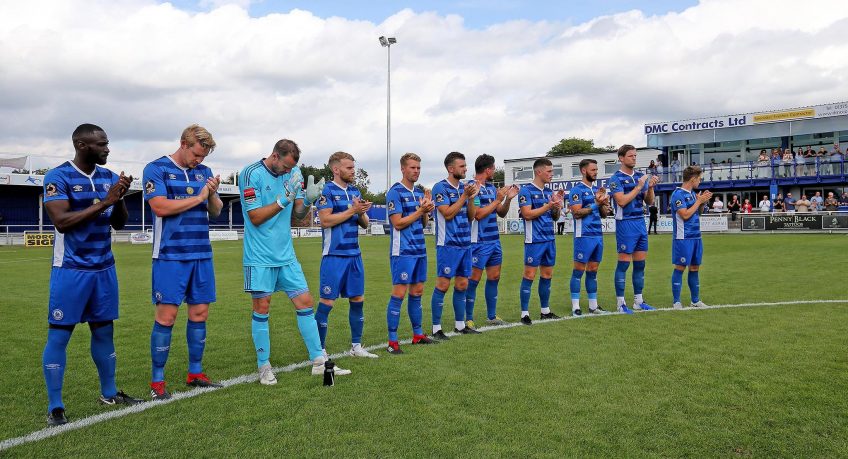 Billericay’s new look team pause prior to the opening warm up game to offer applause for the late Justin Edinburgh. Photo Courtesy: @nickyhayesphoto

With sustainability always official club policy, but rarely followed, it looked finally as if actions backed up the narrative. A series of smart signings, and the stated aim to run with a slimmer squad of “up to nineteen players” was promised. June signings included in-demand midfielder, Jordan Parkes, arriving from Hemel Hempstead, experienced defender, Ronnie Henry, recruited from League Two, Stevenage, and right-back, Ben Nunn snapped up from Dagenham. Free agent back-up defensive options, Josh Urquhart-McLeod and right-back, Tambeson Eyong, returned to the club.

A new month brought a new main sponsor, The Steel Team, which maintained close business links with Tamplin. It would be a short-lived relationship with the club but one that would initially see a name change for the stadium. The new kit launch, announced on July 1st , revealed natty new Puma kit designs modelled by new arrivals, Jordan Parkes, in the blue home shirt, and Ronnie Henry sporting a white away jersey. Supporters would need to wait until the end of July, and the visit of Boreham Wood, for their first sight of the shirts in action due to initial supply shortages. 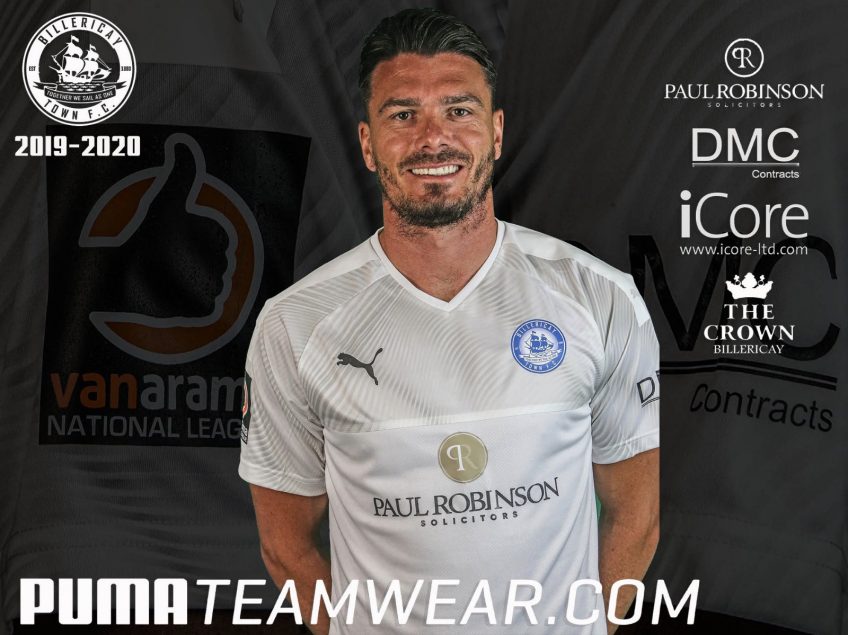 The first friendly match against a Mark Wright All-Stars’ X1 ended in a home 3-1 win, with Robinson, Parkes, and Adam Cunnington on the scoresheet. More importantly, the fixture raised money for former Blues manager, Justin Edinburgh’s charity foundation, set up after his untimely death, aged 49, the previous month. We never did get to see the elusive Joe Cole although there was a celebrity turn-out of former football stars such as Danny Murphy, Bobby Zamora, Paul Konchesky, and James Collins. Even ex-Blue Youtuber, Jeremy Lynch appeared as the Blues completed an early work-out. 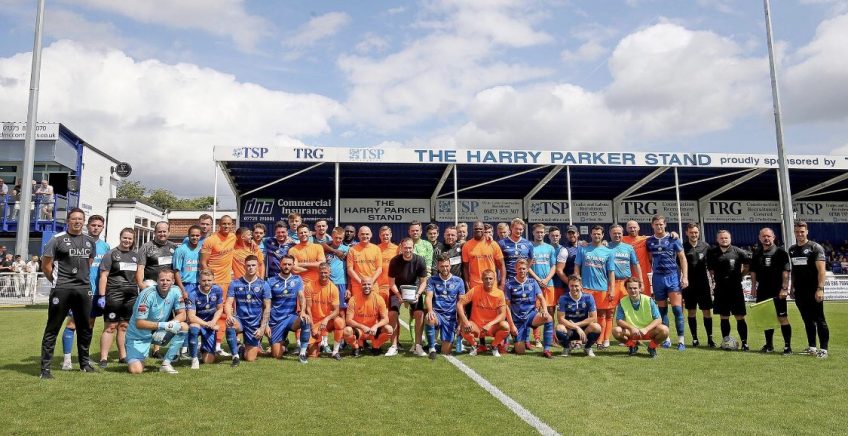 A home encounter against a strong Southend United side was the choice fixture of what had been a relatively low-key pre-season line-up. After taking an early lead courtesy of a precise Kennedy effort, Blues showed familiar failings to concede three goals from mistakes at corners before a late consolation from trialist, Samuel Egole. Although an impressive display from the home goalkeeper, Julian, helped to ensure the defeat remained narrow, Billericay acquitted themselves well and gave every indication that initial preparations for the new season were proceeding in line with plan (see Julian’s best saves below; commentary @btfcliveradio).

Town looked play-off aspirants if the season went well but never title contenders. Club ownership was nevertheless more ambitious. Encouraging his twitter followers, from his sunny bolthole overseas, Tamplin tweeted after the Southend match: “Billericay fans, get your money on us winning the League at 10/1. Just finalizing two major signings.” It had not taken long for sustainable to be called back to the bench. High-profile signings of ex-Barnet defender, Craig Robson, former Forest Green Rovers centre-back, Gavin Gunning, and acquisition of Doug Loft were announced on July 17th. 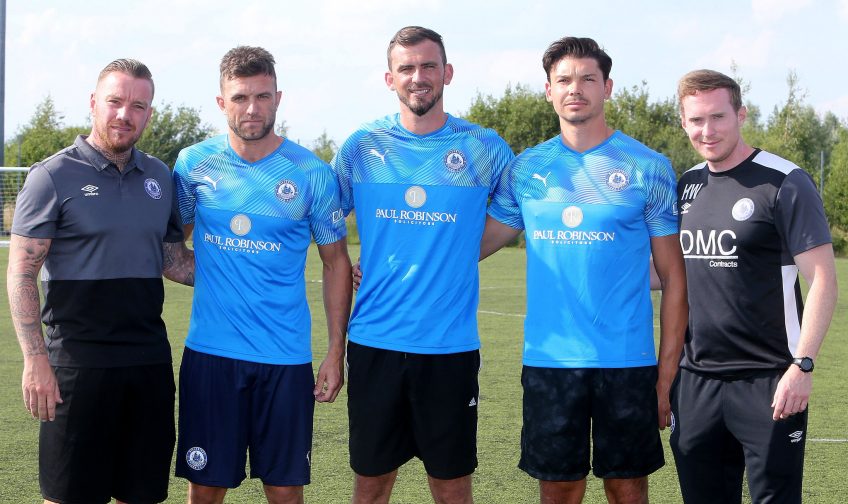 Additional, experienced cover at the back and in defensive midfield was welcomed. Wheeler commented: “I knew we needed more depth in that area of the pitch and Glenn came to me with Gavin and Craig.” Gunning debuted 24 hours later at Aveley against Grays Athletic, catching the eye in the Blues defence. A commanding presence, and willing to make long forays forward, he looked worth the extra outlay. With Henry equally proficient alongside him, threading clever passes into midfield, and the full-back’s, Nunn and Kennedy, revelling in wing-back roles, Blues looked well set. 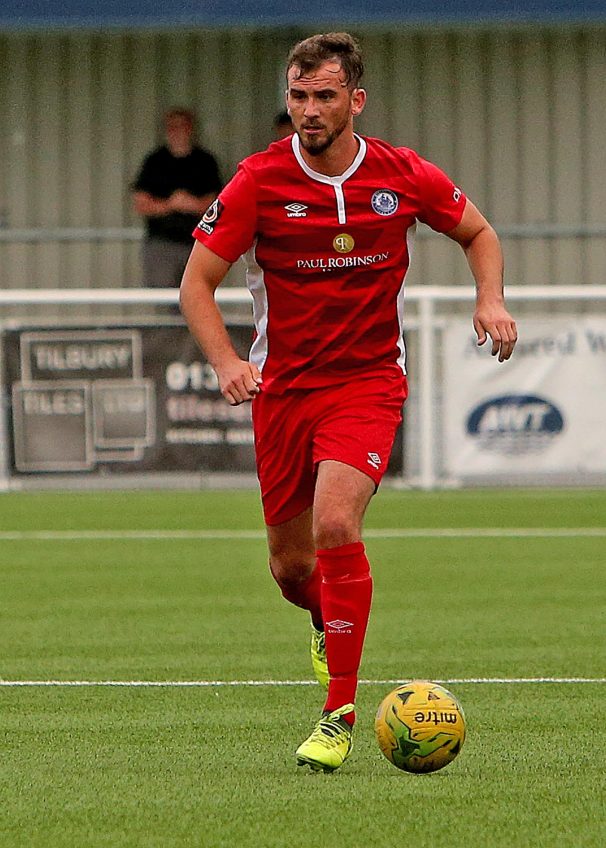 Gavin Gunning in action on his debut for Billericay against Grays Athletic. Photo Courtesy: @nickyhayesphoto

A 2-7 win against the Isthmian North side suggested the forward line was functioning well as Robinson, now signed up, helped himself to a hat-trick while Cunnington and Alfie Potter registered braces. The highlight of the match was the performance of Potter who continued a strong pre-season campaign with a 38th minute goal of quality. Receiving the ball from Nunn, the blonde-haired dynamo evaded two challenges to enter the penalty area. Dribbling around a pair of Grays defenders, a shimmy sent the goalkeeper to the floor and Potter walked the ball into the net (relive it in frame-by-frame detail in the tweet below provided courtesy of @btfc). 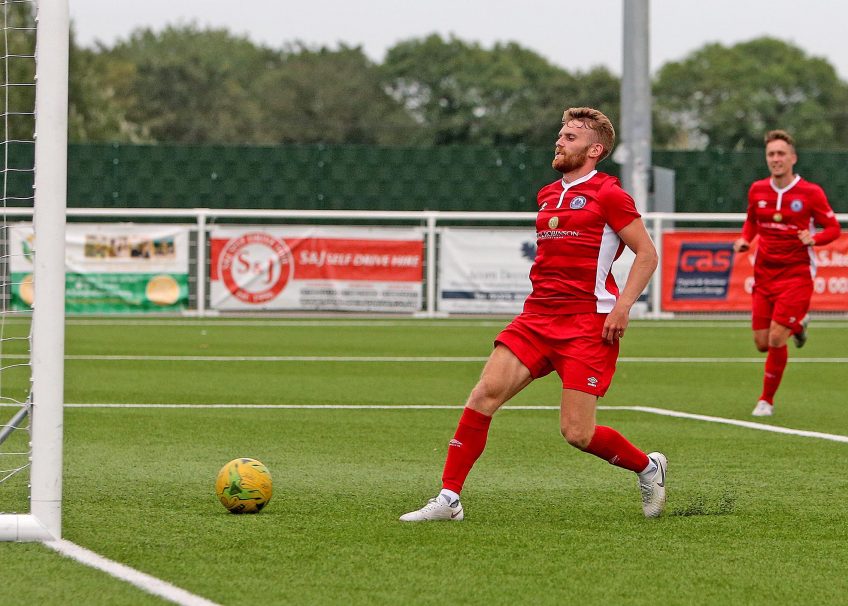 Alfie Potter walks the ball into the net in the 2-7 friendly win versus Grays Athletic after beating four players. Photo Courtesy: @nickyhayesphoto

Next stop, on July 23rd, was North London, destination Silver Jubilee Park, home of Hendon. On a sweltering mid-week evening, Billericay laboured over a 2-1 victory courtesy of strikes from Moses Emmanuel, back after injury, and again from Cunnington, who maintained a healthy goal rate during pre-season. With Tamplin announcing the arrival of ex-Grimsby Town striker, Wes Thomas, the previous day via a cryptic tweet, using first the initials of words to spell his name, there was plenty of incentive for the Billericay strikers to stay among the goals to be sure of a starting place. 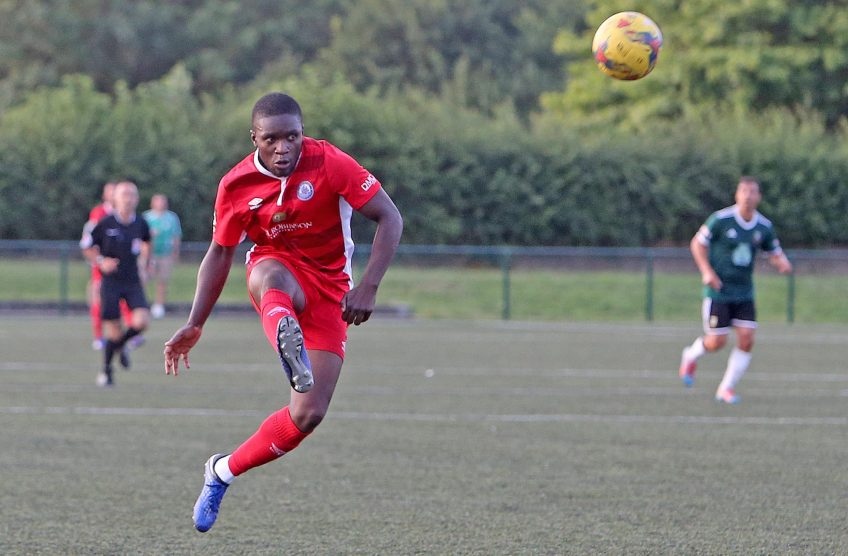 Moses Emmanuel opens the scoring for Billericay Town in the away trip to Hendon. Courtesy @nickyhayesphoto

During previous high-profile recruitment rounds, fans had become familiar with the arrival of “big guns” such as Jermaine Pennant and Paul Konchesky. This time, we would be treated to something new – the “beast baller”. Enter, ex-Lincoln City centre-forward, Matt Rhead, to become Town’s eighth and final summer signing. Described as “a man written off more times than Rocky Balboa”, the striker, 35, was recruited specifically for his aerial prowess. A recent League two winner, his new nickname appeared to fit him considerably better than his football shirt.

Billericay’s most meaningful game of pre-season came on the final Saturday afternoon of July. A match-up against high-flying National league side, Boreham Wood, would serve as a barometer for progress and the starting line-up looked like a dry run for the first match of the season on August 3rd. Wheeler aligned in 4-2-3-1 with centre-backs Gunning and Henry flanked by full-back’s Nunn and Kennedy. Defensive midfielders Robson and Loft provided a solid barrier in central areas. With Deering injured and Parkes absent on vacation, Paxman and Potter also filled midfield positions. 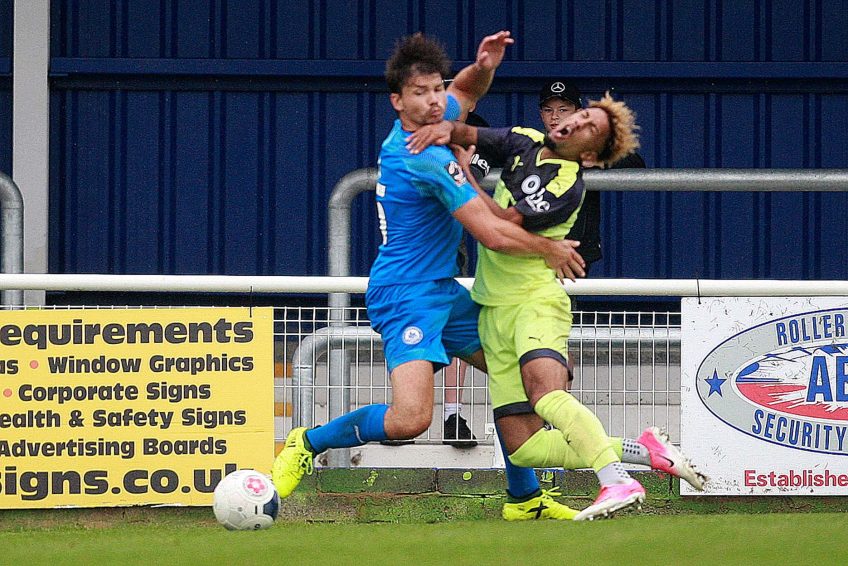 Up front, new arrivals Wes Thomas and Matt Rhead started with Robinson and Emmanuel available from the bench. Rhead debuted and made an impressive start at his new club in a narrow 2-1 home defeat against Wood. Turning provider with a flick-on for Emmanuel to finish, he almost snatched a late draw but for a fingertip save from visiting goalkeeper, David Gregory. The Blues had always looked second best to a lively higher League side but there was every indication that the Essex side would be competitive at the upper reaches of the table and that the new arrivals would contribute. 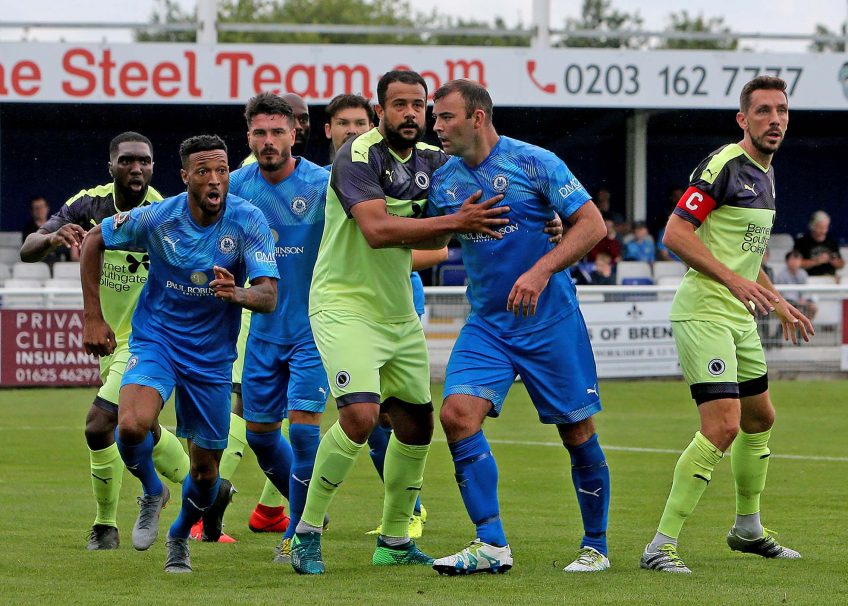 After a quick turnaround, the Blues had their final dress rehearsal before the big kick-off at Isthmian North side, Hornchurch. Wheeler took the opportunity to experiment with team shape, beginning with a 5-3-2 before finding that it made more sense to match up with the Urchins’ 4-3-3. A slow start saw them fall behind to an early strike. Within three minutes, Billericay had levelled through an unfortunate own goal and turned it round to lead as Kennedy rifled home a long-range free kick. A less than fluent performance ended without any further score. Perhaps the most notable point of the evening was that it was Thomas’s last match before departing the club. 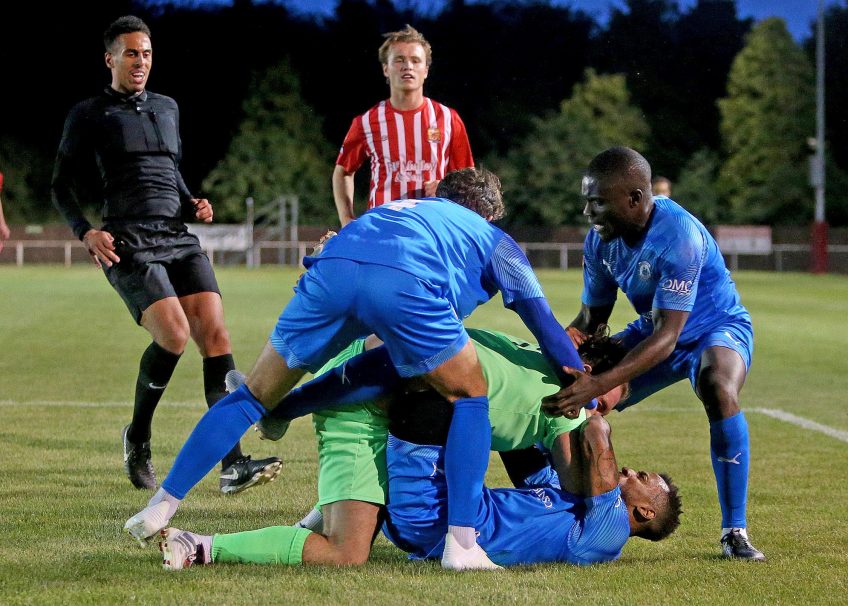 Wes Thomas starts a mass confrontation in the final game of his short spell at Billericay at Hornchurch. Photo Courtesy: @nickyhayesphoto

With the phony war over, all attention turned to the start of the season with Eastbourne Borough first on the agenda before two away trips in succession. Relegated Braintree Town and an unhappy hunting ground for the Essex side, Chippenham Town, site of the end of the first Wheeler reign, loomed. With an enlarged budget, top players brought in, expectations had become elevated and a fast start was essential for the management team. August would see the games come thick and fast.