Victory eluded Billericay Town once more after a trip to Eastbourne Borough ended in a frustrating draw. In a match heavily dominated by the weather, the Blues were caught cold by Charlie Walker’s far post header after 90 seconds. Jack Paxman equalised with a neat finish after the break, securing the point that leaves the Essex side outside the relegation places only on goal difference.

With three matches in one week, including trips to the south-east coast and Weymouth, and a home fixture against Oxford City, Billericay have had ample opportunity to improve a perilous League position. Three points garnered from those games, and six draws in the last seven played, has proved insufficient bounty to allow the club to ‘sail as one’ away from the stormy sea of demotion. 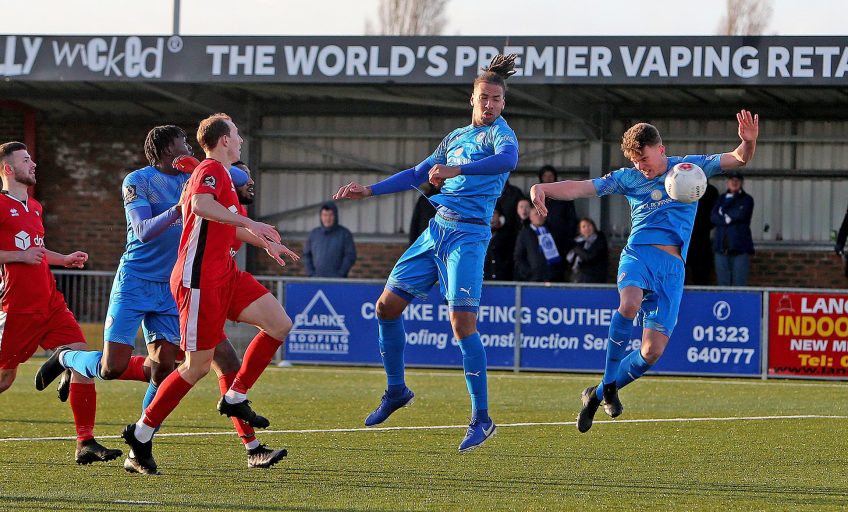 If it was not clear before, it should be now that the Blues are enveloped in a relegation dogfight to save their National South status. The familiar refrain of pitch problems at New Lodge, and the security of multiple matches in hand on the opposition, provide little comfort without points on the board. With victories so elusive – Wealdstone at home in early January for the absent-minded – and basement clubs putting together positive results, Billericay need to post an upturn in form soon.

Hopes were that Priory Lane would provide the backdrop to kick-start the season after the encouragement of a plucky draw and clean sheet at high-flying Weymouth. A direct rival, just one point in advance at start of play, the Blues had accumulated a maximum return in the previous three meetings since returning to Step Two football. With both sides of recent renown as point sharing specialists, Eastbourne coincidentally also with six draws in the last seven, a stalemate was to be feared.

Visiting manager, Jamie O’Hara, made three changes from mid-week’s match-up in the mud against Oxford City. At right-back Louis Ramsay came in for Dinesh Gillela, midfielders Ade Cole and Jacob Cook came back into central midfield at the expense of Oran Jackson. Striker, Dejon Noel-Williams, dropped to the substitutes bench. After a flirtation with three at the back earlier in the week, Blues chose to line up in a 4-4-2 formation.

Eastbourne boss, Danny Bloor, made two changes from the side that lost narrowly at Dartford. Introducing a second striker in a switch to 4-4-2, Walker entered the fray with central midfielder Jethro Hanson making way. The second selection was enforced as centre-back, Ian Gayle, injured himself in the warm-up and had to be replaced with Kiran Khinda-John. This gave 18 years old central midfielder, and academy product, Daniel Blackmore the chance to feature once more as a substitute.

The home side began with the extra fillip of playing with the wind. Seeking to exploit the favour of the elements from the start, they began with a shot on goal from the kick-off. It sailed wide but set the scene for the rest of the match, which would be dominated by the weather. The opening goal owed nothing to prevailing conditions with assistance coming directly from an inattentive Billericay defence.

Whilst political thinkers have long debated the difference between freedom and liberty since the birth of democracy, Sports’ winger Cox showed that both can be combined.  Operating according to his own free will and, in the absence of full-back Hudson, without restraint, he sent in a delicious cross from the right to the far post. Walker, unmarked, applied a headed finish for his 7th League goal of the season.

Whilst Billericay’s propensity for slow starts may be difficult to understand, the effective Cruyff turn in weather conditions was a true wonder to consider as sunlight turned into a full-blown hailstorm. We can solve one of these mysteries via the explanation that rising air, known as an updraft, occurring in strong thunderstorm clouds has the effect of lifting water droplets high into the atmosphere where temperatures are below freezing. This, in turn creates the hailstones that sheeted down, prompting a brief interruption in play. The other conundrum continues to baffle. 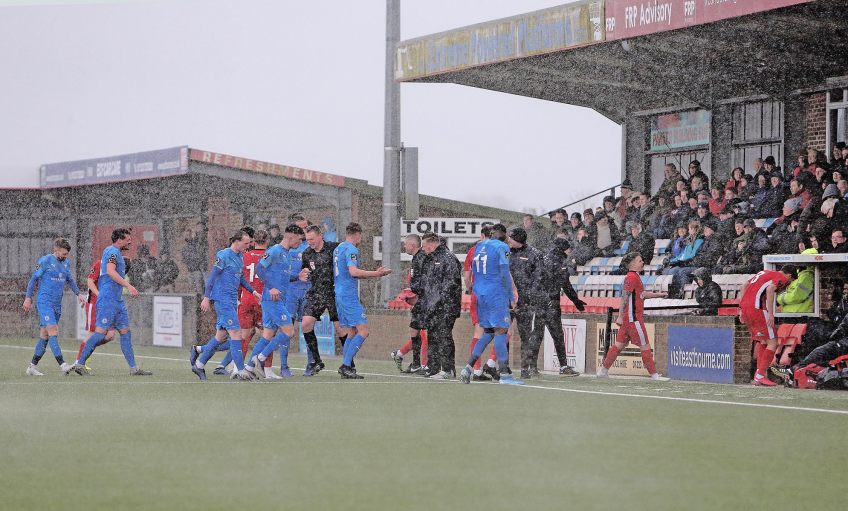 Both sets of players leave the pitch briefly after a hailstorm develops. Photo Courtesy: @nickyhayesphoto

With the wind infusing the Eastbourne players with the belief that they had gained the shooting prowess of a gifted Brazilian international, Kane Wills was first to try his luck from 40 yards. In a clear victory of mind over matter, the ex-Margate and Worthing man saw his effort fly narrowly wide.

Drifting forward on the breeze, the pressure intensified as further attacking intent was shown by the gloved duo of Walker and Greg Luer. Billericay defenders backed off, unsure if the strikers’ accoutrements were made of smooth or grainy leather, soft suede, intricate tweed, or perhaps half inched woolly numbers from the club shop. Combining smartly, Luer slipped the ball left to Walker who fired his effort narrowly wide.

Billericay’s Femi Akinwande bustled busily down the right-hand side and turned creator to put Jack Paxman in for the Blues’ first sight of goal on 21 minutes. Driving past the strikers, Paxman, one-on-one with the goalkeeper, could only shoot against Franco Ravizzoli. The former River Plate academy goalkeeper from Argentina is treading the path followed by Eastbourne player-coach, Sergio Torres, who enjoyed a successful League career at the likes of Wycombe Wanderers and Crawley Town. 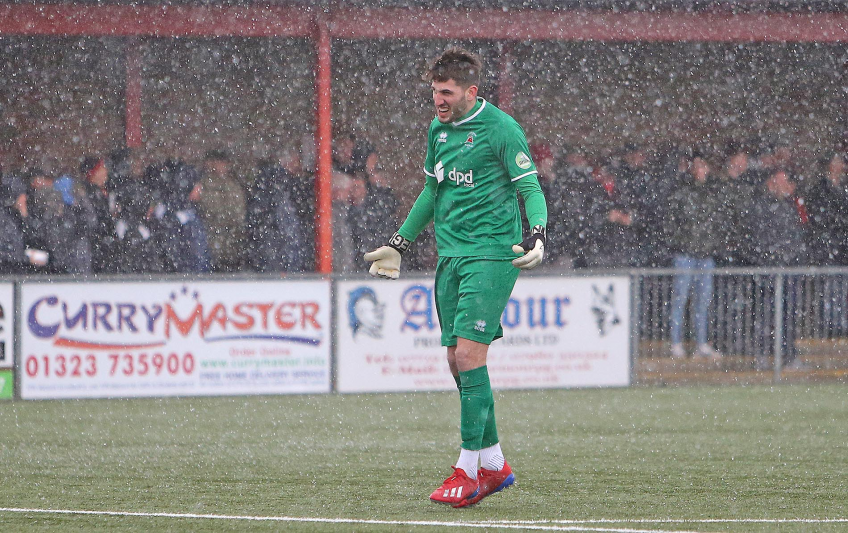 The majority of chances were falling Eastbourne’s way with Wills’ free kick finding Luer. Improvising cleverly, the former Hull City striker deflected the ball towards goal only to find the frame of Julian who had got his angles right to block. His attacking partner, Walker, had his fingerprints all over the next threat on goal. Picking up a ball from Khinda-John, after Cole was initially careless in possession, his low drive inside the far post demanded a diving stop from Julian.

Akinwande, brought to Billericay last November to take the club “to the next level”, seems fully occupied trying to keep the Essex side at its current one. With six League goals scored in quick time, the ex-Braintree striker has been a major positive since his arrival. Although the goals have dried up in recent weeks, with his last just over one month ago, his performances remain at a high level. Set away by a Jake Robinson diagonal, he raced down the right flank. Exchanging passes with Paxman, his low shot hit Ravizzoli and rolled agonisingly along the goal line before being hacked clear. 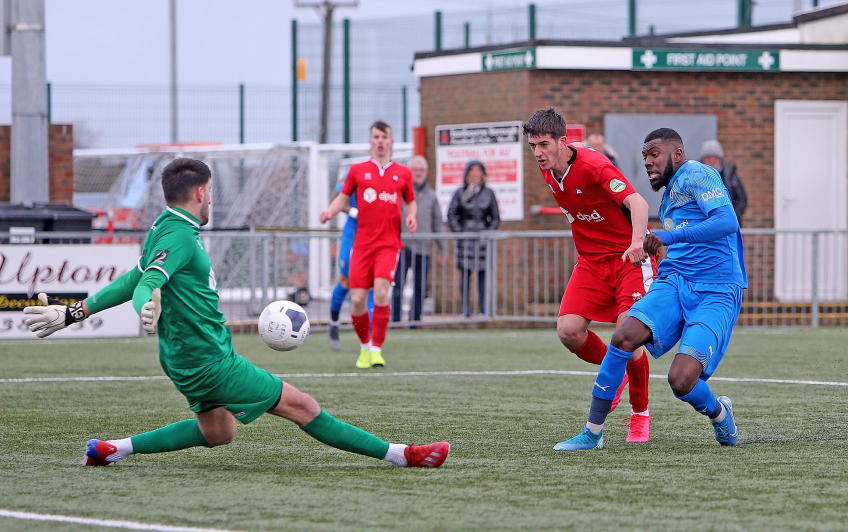 Femi Akinwande fires a shot on goal in a lively performance for Billericay. Photo Courtesy @nickyhayesphoto

It would not be long until the gloved pest made his presence felt once again in what was a fine performance from the Eastbourne striker. Using his experience, Walker dropped intelligently into pockets of space behind the front line to pick up possession and hit a 25-yard strike just wide. Central midfield colleague, James Ferry, taking his cue from the shoot on sight policy operated by the Sports’ had a dig but it sailed over the bar. Like an enthusiastic parent at a wedding reception, hitting the dance floor seems like a great way to get involved in the party but is not for everyone.

Combatting the fierce wind, Billericay’s Julian struggled to gain distance on his kicks but, in the opinion of the referee, lingered too long in preparing his clearances and was duly booked. A yellow card whilst trailing is something of a novelty in football with the home fans particularly appreciating the gesture from the officials to generate a question for the next fund-raising pub quiz. 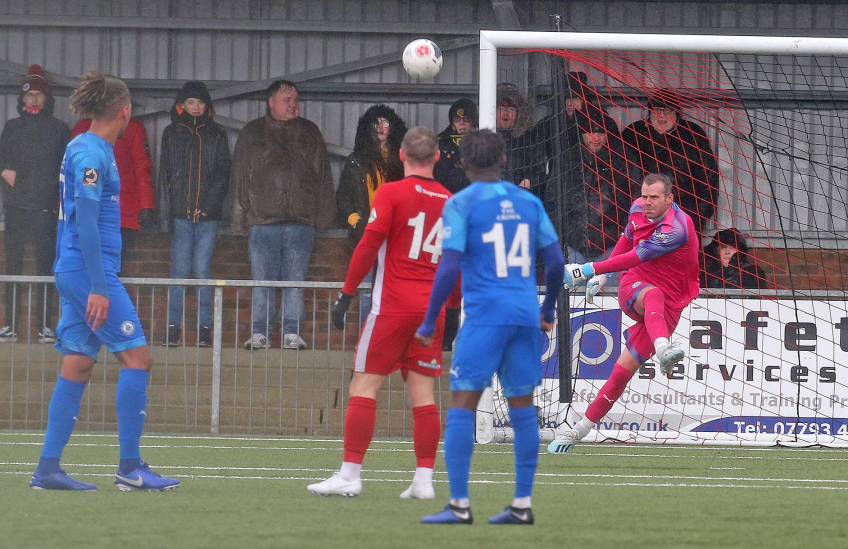 Billericay’s Alan Julian struggles to get distance on his goal-kicks playing into the wind at Eastbourne. Photo Courtesy @nickyhayesphoto

It was fitting that Billericay’s two best players, Paxman and Akinwande, soon combined to haul the visitors’ level on 47 minutes. A trademark driving run down the right from Akinwande left Steven James floundering. Centring precisely, Paxman arrived at the right time to sweetly guide the cross into the bottom corner. With the match and the wind moving in the right direction, the Blues looked well-placed to exploit the favourable conditions and take home the three points. 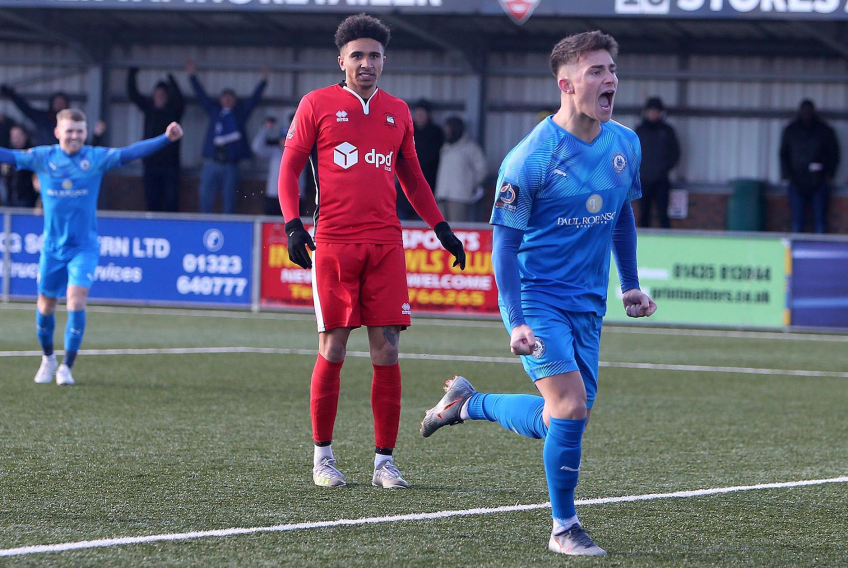 Ady Cole was soon in on the act picking up a Ramsay pass to work an angle and send a 30-yard curler marginally wide. Defending deep, the home defence resembled the Eastbourne Redoute, a coastal fortress built in 1805 as part of British anti-invasion preparations during the Napoleonic Wars. They would never have faced a foe as determined and skilful as Akinwande who breached enemy lines as he charged into Eastbourne territory. Undone by what looked like a touch from left-back Franklin Domi, the invader fell in the penalty area. The officials took a lenient view and let play continue. 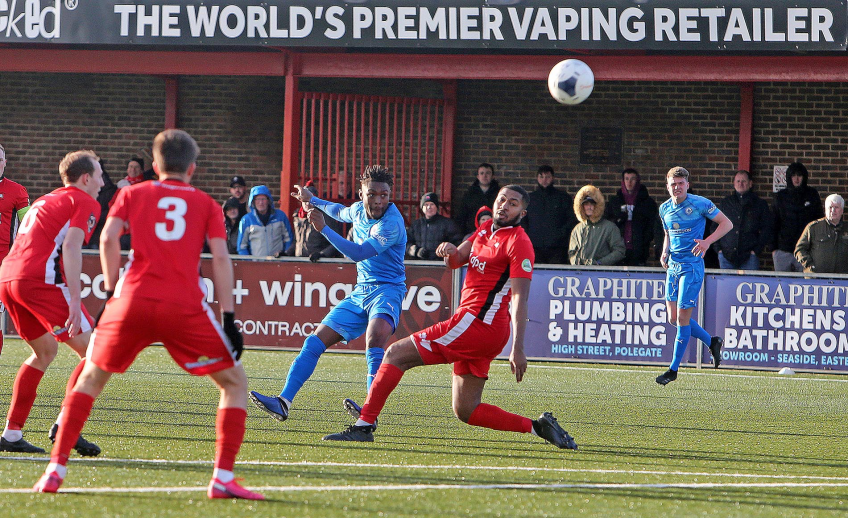 With the desired break-through not forthcoming, O’Hara sent on Noel-Williams for Ramsay. He soon created an opportunity for Cole who alighted on his flick-on but could only send a deft effort with the outside of his foot over the bar. Eastbourne retreated into two blocks of four and defended resiliently. The home side remained a threat with Walker always a menace from swift counters.

Walker almost won it for the home side as he burst forward on the right. Sending the ball wide to Cox, he galloped into the Billericay area, took the return, and hit a low shot across goal and past Julian. But for the width of the post, which repelled the fine effort, Walker would have gained reward for his endeavour.

Clearly frustrated with his side’s predilection to give the ball away and lack of creativity in central midfield, O’Hara took the decision to bring himself on to try and influence proceedings. Four minutes was too little time to turn this game. His clever, flighted free kick at the death found Hudson’s head but the Watford loanee could not beat an inspired Ravizzoli who saved easily. 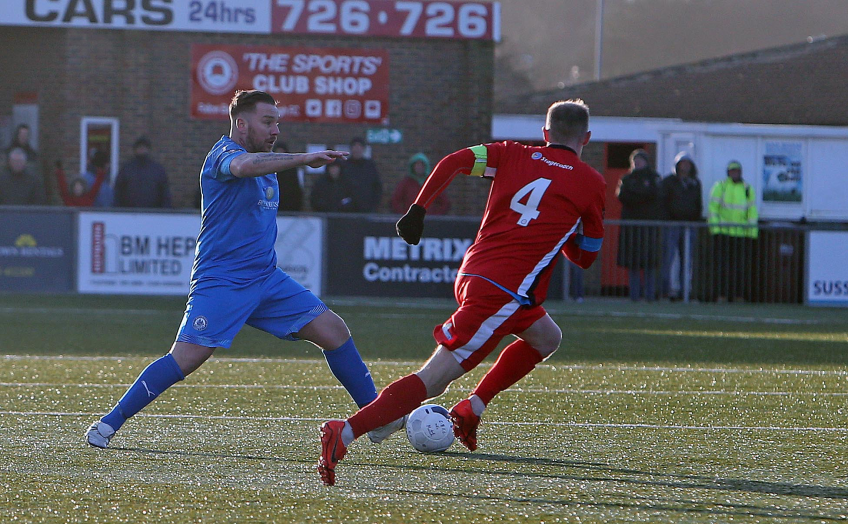 An afternoon of high expectation ended in disappointment for Blues fans as the team recorded yet another draw. Weather conditions did dominate but Billericay as a unit failed to impress once more. Slow to start, conceding a sloppy early goal, the team did regroup well to limit the damage. Striking back so early after the break, the visitors lacked the clinical nature to take advantage of good openings. Paxman aside, midfield lacked creativity, and only Akinwande shone in an outfield position.

With the fixtures coming thick and fast, there is plenty of opportunity to put things right. The players at the club are good enough to put together a run of good results but the first vital win appears to be the most difficult. With central defensive weaknesses now fixed, it is certain that goals conceded will reduce, it is now a question of combining creativity with being more clinical. It’s only Havant next!