Billericay Town’s first season back in the National South ended in disappointment as a 0-2 home defeat to Bath City extinguished hopes of a play-off place. The Blues can have no complaints as a well-organised visiting side secured the points with two quick-fire goals in four minutes after the break through a Robbie Cundy header and well-worked free-kick routine finished by Tom Smith.

The Essex faithful trooped down to the AGP for the final League game of the season. Knowing that a win against the 5thplaced Romans was likely to be the only result to ensure keeping the season alive into May, most acknowledged that the Blues faced a tough test. Both sides had suffered from indifferent recent form with Billericay accumulating a mere seven points from their last 8 fixtures. Whilst the West Country side had also stumbled in the run-in, with ten points over a similar sequence, enough had been done to ensure that participation in the play off was already secured. 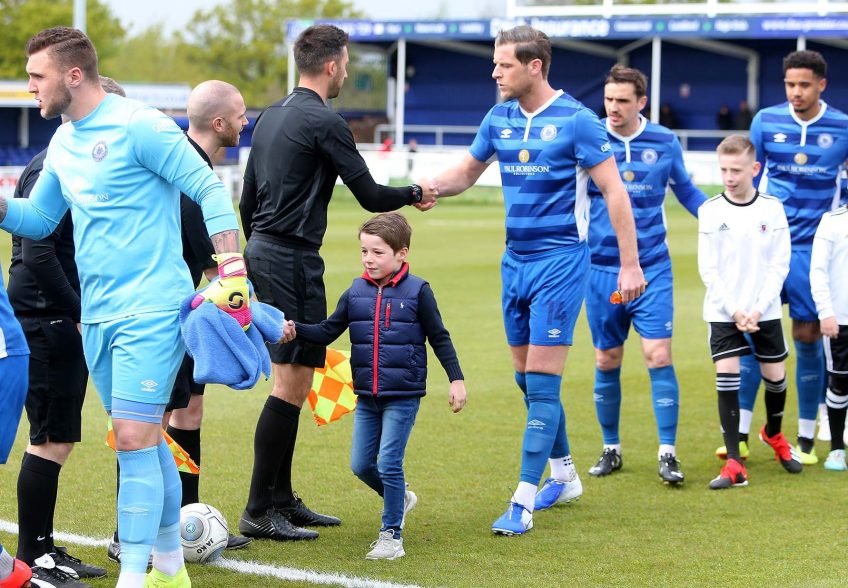 Billericay manager, Harry Wheeler, kept to a 4-4-2 formation but made four changes to the team that had lost the previous weekend at Dartford. In a shake-up to the defence, fit again centre-back Cole Kpekawa was selected in place of Paul Rooney. Left-back Callum Kennedy made his first start since his ankle injury at the beginning of January at the expense of Michee Efete. In midfield, a cautious tone was adopted with the defensive minded, Danny Waldren, coming in as an alternative to Alfie Potter. With Moses Emmanuel out injured, midfielder Sam Deering came back into the side.

Bath made one change to the line-up that had prevailed at home to Oxford City in the last fixture. In came winger, Ross Stearn, in place of the unfit wide-man Sean Rigg. Veteran striker, Andy Watkins, had been expected to start but was hurt in the pre-match warm-up and ceded his place to Stearn. Unsurprisingly, no changes were made to a defence that had the best record in the League with a measly 36 goals conceded in 41 games. Manager, Jerry Gill, elected to use his favoured 4-3-3 formation although he has been willing to switch to 4-4-2 and vice versa during recent matches.

On a chilly April Saturday afternoon, Billericay started purposefully as an early Deering cross was to provide Jake Robinson with an opportunity to fire off a first shot on goal. Early proof of the visitors’ superb defensive organisation was evident as a crowd of Bath players converged on the Blues striker to block his strike. Regularly surrounded by several home defenders, Robinson found space hard to come by for most of the game and would only combine sporadically with Adam Cunnington. 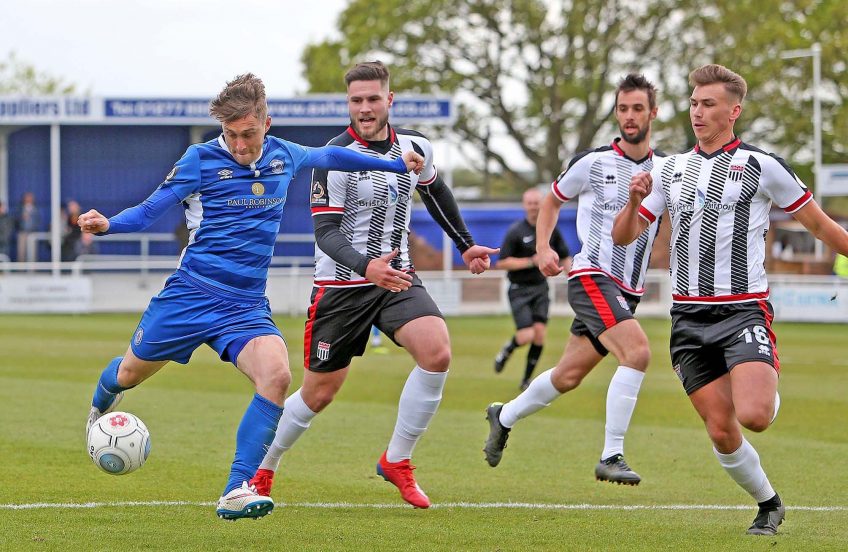 Tom Smith recorded a first effort on goal for the West Country side on six minutes, hitting a drive just wide of the left hand upright from 20 yards. A lively presence from central midfield, the 21 year old Cheltenham Town loanee was a constant threat running from deep and shooting when within range. In response, good pressing by right-back Joe Kizzi would secure possession from Bath’s Freddie Hinds and release Robinson who sped towards goal on a 30 yard run. Central defender, Jack Batten, who was commanding alongside Cundy in defence, was quick to intercept and blocked the striker’s low shot.

On 9 minutes, a piece of smart defending would deny Billericay a certain goal at the far post. Good work on the right side between midfielders, Deering and Jack Paxman, released Kizzi who put over a fine cross. With Blues’ Cunnington ready to pounce, Joe Raynes jumped highest to divert the ball away from danger. On 22 minutes, Kizzi himself found space at a corner but could not make the right connection with his head, putting the effort wide of the target. 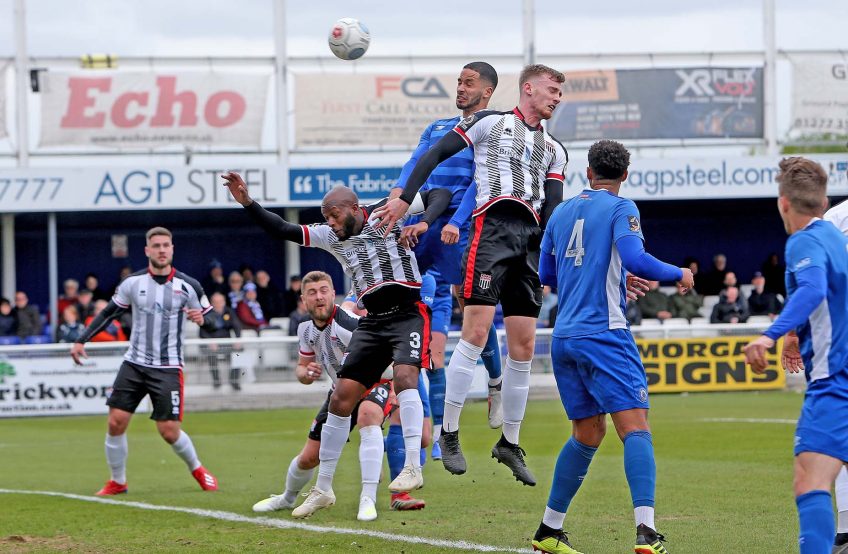 With Bath City’s defence and midfield linking together impressively to restrict space, the home side found it increasingly difficult to penetrate a tight defensive line and ceded possession regularly. Bath were swift on the break and utilised their pacey wide-men to counter. On 29 minutes, Stearn caught out Kennedy, slipping the ball past the full back, to motor down the line. In behind the Billericay defence, Stearn smashed a shot towards the near post that goalkeeper, Mark Smith, pushed away.

On 41 minutes, Smith would be called into action once more as a James Morton free kick for the Romans was bent around the defensive wall from just outside the right side of the penalty area. Diving full length to his right, to prevent the strike nestling in the bottom corner of the net, the goalkeeper would have cause to question the placement of his defensive barrier. With no further incident, the half ended with Bath looking the better side but unable to get the breakthrough.

Blues started the second half in determined spirit but, within five minutes, had seen Waldren and Cunnington accrue the first yellow cards of the match as Bath maintained a tight control of the game. Stearn had been relatively quiet but sprang to life with a succession of step-over’s to befuddle Kennedy and deliver a cross that forced Billericay’s Wassmer to hurriedly clear the danger. 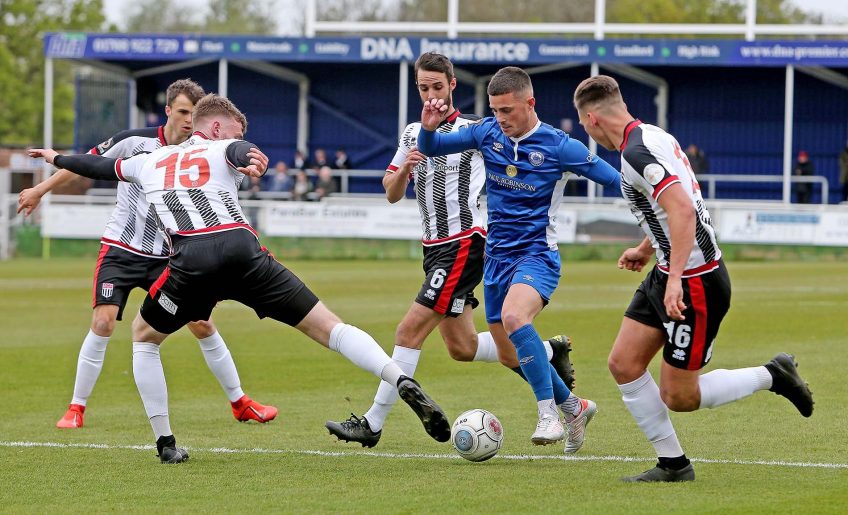 The corner conceded heralded the commencement of the four fateful minutes around the hour mark that would see Bath move into a decisive lead. On 57 minutes, 6ft 4 ins Cundy enjoyed the freedom of the Billericay six yard box as he ran in to head home his 6thgoal of the season from close range. It is hard to believe that such an obvious danger man was left alone at a set piece. In his post match comments, a furious Wheeler seemed to indicate that a defensive error had been made. In an attacking change, winger Loza was sent on for defender, Kennedy, as Billericay sought to get back into the match by increasing the threat from wide areas. 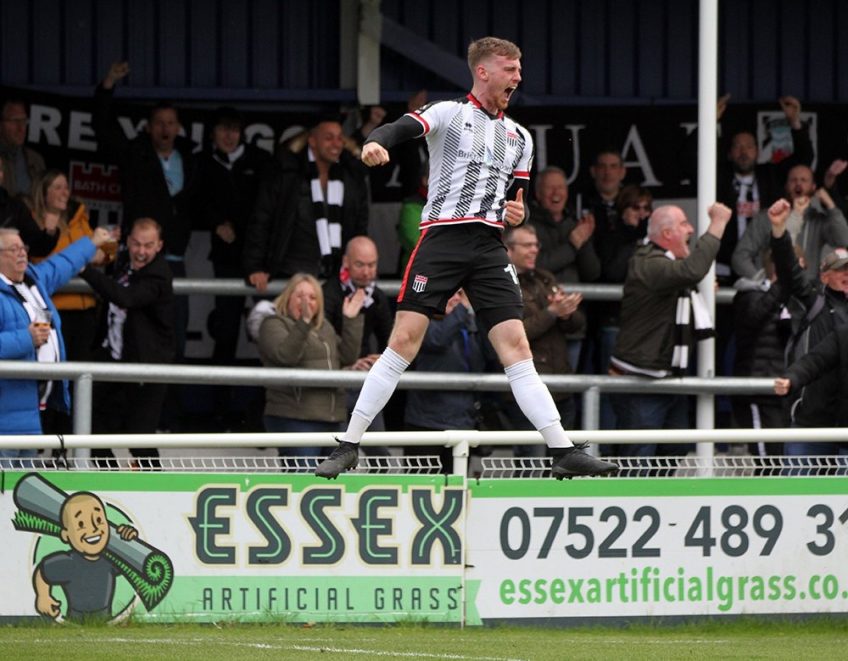 Momentum remained with the West Country visitors’ as Waldren was fortunate to escape a second yellow card after he committed a foul just outside the box. The reprieve would not last long as the resultant free kick would see Bath take an unassailable two goal lead. In a rehearsed routine, Stearn tapped the ball right to open the angle for Smith who hit a low twenty yard strike beyond the goalkeeper. Billericay’s Smith will likely reflect that he should have done better to stop an effort close to his body, and not particularly firmly struck, even if it brushed a defender on the way past the wall. 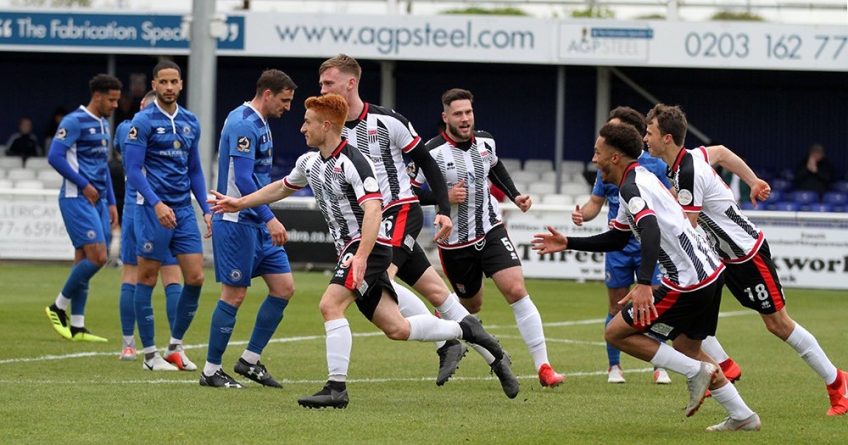 It never rains but it pours. By coincidence, at exactly the same moment as the second Bath goal was registered, news filtered through that Wealdstone had taken the lead at Hemel, moving into the play-off places at the expense of Billericay Town who needed a win to overhaul the Stones. With the Romans in confident mood and well in control, a prayer for a favour from Dean Brennan’s former side looked the best way forward rather than expect the Blues to secure an unlikely turnaround in fortunes.

It is to the credit of the Essex team that they showed some resistance with Robinson going close on 62 minutes as he stuck out a foot to divert a Loza cross wide. With Adam Coombes entering in place of Waldren, Billericay went on the attack with the ex-Welling man prominent on the right. On 65 minutes, Robinson would this time evade his defensive minders and flash a shot across goal that demanded a diving save from Bath’s goalkeeper, Ryan Clarke. With two attacking Billericay substitutions made, the home side took additional risks that led to the team’s most threatening period.

On 70 minutes, Loza had a strong appeal for a penalty turned down as he cut inside Bath defensive midfielder, Frankie Artus, who appeared to catch the Jamaican winger with a flailing arm. Sadly for the expectant home crowd, all Loza earnt from the referee was a yellow card for his protestations. In a final throw of the dice, Wheeler sent on Potter for defender, Kpekawa, on 75 minutes, switching to a back three of Jake Howells, Wassmer, and Kizzi and attacked with four strikers on the pitch. 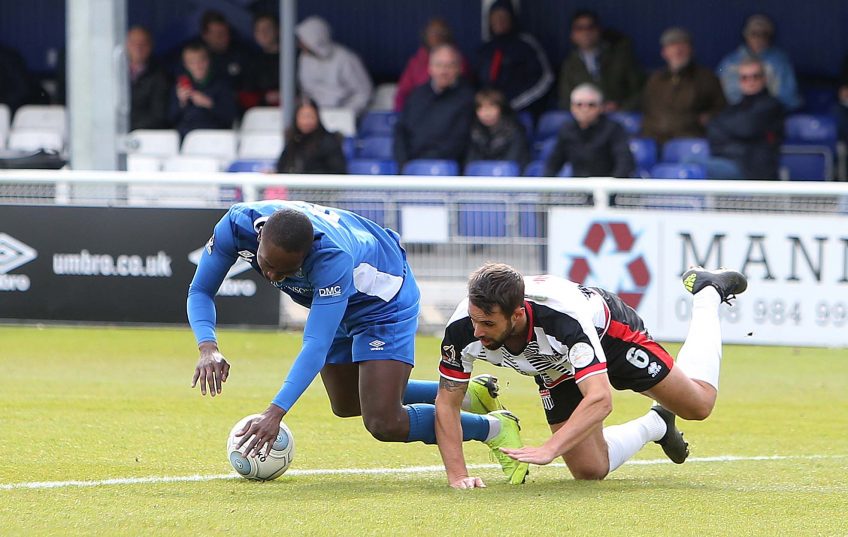 Bath maintained their shape to weather the storm but were relatively untroubled in the closing stages. The last action of note was a wildly misdirected 84thminute volley from the smiling Hinds that sailed out of the stadium by some distance. The Romans had little more to do than run down the clock replacing Hines with Sol Pryce and Stearn with Dan Ball to secure victory. A home tie with Wealdstone awaits them on Wednesday evening in what should be a well-matched contest.

Billericay’s season ends in 8thposition and disappointment, coming up short of the ‘play-off’ objective set by the owner and maangement. With the dip in form witnessed in recent weeks, the unsatisfactory conclusion to the 2018/19 campaign is not wholly surprising. However, it should be remembered that the Blues overcame poor Xmas results to haul themselves back into contention when most believed the opportunity was lost and finished highest of all the promoted clubs.

The only certainty for Billericay Town is that there will be significant change over the pre-season with a number of players expected to depart the AGP. With manager Wheeler’s contract expired following the end of the campaign, change in the dug out is likely as well. After a successful first few weeks back in charge of the Blues, the season stuttered to a close with familiar mistakes being made on a weekly basis and, with poor form, the case for retaining Wheeler has weakened. One can only wonder what could have been achieved if his very successful first spell had not been curtailed after the Chippenham defeat.

Whatever happens in the future, matters should be resolved as soon as practicable, reflecting the wholesale changes likely to result in an effective “fresh start” next season. Whoever is appointed as manager – whether that be a new man or not – he will need as much time as possible to build a squad to ensure that the team hit the ground running over the summer pre-season. There is a nucleus of a good side at the club that could at least make the play-off’s with the right additions but backing will be required even if results are slow to arrive.

Let’s hope that the correct blend of the old and the new can be achieved to push on for promotion next time around rather than a potentially less inspiring full re-build that becomes the famous “year of transition”. Having come so close to the play off’s in the first season back at step two, the club will benefit from another year of experience at this level and should be better equipped to succeed. Some may also argue convincingly that promotion this time would have been too soon.