O’s One Step Away From Football League Return 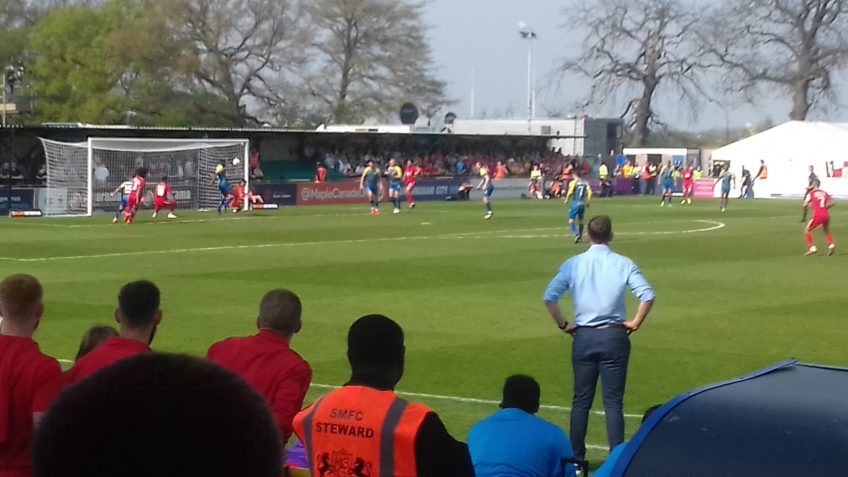 Leyton Orient took a step closer to the Vanarama National League title after a fraught, tense and battling display against a Solihull Moors side that were themselves not totally out of the title picture. While Salford City entertained AFC Fylde, the Moors and the O’s had their own game to play out. With the top four all involved in games against their other promotion rivals meant that it was to be an afternoon when eyes occasionally strayed away from the action at the Automated Technology Group Stadium to see how things were shaping up at the other big promotion game taking place at Salford’s Moor Lane.

Solihull kicked off and attempted to get into the O’s but it was a scrappy start as neither side allowed the other to settle. However the O’s did manage to fire off a few early shots, with Josh Koroma having a shot saved by Ryan Boot, with the Moors ‘keeper also punching clear a Jamie Turley cross, while Jobi McAnuff saw a shot blocked by Kyle Storer. Jamey Osborne blazed Solihull’s first chance over the bar, then Adi Yussuf managed to outpace the O’s defence and put a shot past Dean Brill, but Dan Happe was able to hook the ball clear. But the Moors were able to keep the pressure on, with Liam Daly placing a header from a free kick wide, then Vaughan flashed a drive across the O’s goalmouth. However Ekpiteta, Coulson, Widdowson and Happe all put in tackles, blocks and deflections to limit the Moors from getting too much of a foothold.

The O’s created an opportunity in the 20th minute when James Brophy found some space but he was soon crowded out by the Moors defence, but he was able to release the ball into Koroma’s path whose heavily deflected shot was easily caught by Boot. Brill had to showcase some fine keeping on the half hour mark, diving to his right to tip away an Osborne free kick. With things being so tight in either defence meant that set pieces provided an opportunity for either side to make an impression. Coulson nearly scored with a trademark header in the 35th minute, but on this occasion his header from a corner was blocked on the line before being cleared to safety. The next chance came two minutes before the break, a free kick, this time for the Moors, was delivered into the six-yard box by Darren Carter but no Moors player was able to make a connection.

Osborne placed an early second half effort wide of Brill’s right hand post. In the 49th minute a cross from Brophy caused panic in the Moors box, but Bonne was not able to capitalise and missed the target with a header, as did Koroma soon afterwards. Then in the 55th minute it was Orient’s turn to experience a bit of panic as a cross ended up bobbling around the box until Ekpiteta cleared the danger. A Wright cross picked out Yusuff soon afterwards, but this threating move was halted by Coulson who blocked and then cleared.

The O’s having had to weather a little storm, then placed Solihull under a bit of pressure as Turley had two chances in quick succession, placing a header from a corner wide then having a low shot saved by Boot. The Solihull stopper was called upon soon afterwards as well, but this time the save he had to make was a bit more routine as Brophy’s shot was fired straight at him.

Reckord went on the overlap in the 69th minute and was able to fire off a decent shot that Brill saved; but Boot pulled off an even better save, a cracker in fact as he dived full-stretch to tip a Bonne shot around the post. Perhaps the reason the game ended goalless was down to the goalkeepers.  O’s stopper Brill, who has pulled off some vital saves this season, perhaps made the most important save of Orient’ season in the 76th minute. A pinpoint cross from Vaughan fell to Hylton whose low shot was saved on the line by Brill. In light of what was going on elsewhere meant that this save ended Solihull’s title challenge, while keeping Orient’s one very much alive.

The closing stages saw little in goalmouth drama, as Harrold and Maguire-Drew could only fire blanks, while Storer placed one further header wide for Solihull. The O’s had shut up shop with Brill doing some sterling work when Solihull were able to get past Orient’s solid defence. At the other end and Boot had pulled off a couple of saves that meant that he too collected a clean sheet. The point means that the Title is not yet in the bag; however Solihull are effectively out of it, although should Orient lose on Saturday then the Moors could land the title if they beat Dagenham & Redbridge by a wide margin.  As for  Salford City they need to beat Hartlepool United away, hope that Braintree Town turn over the O’s on their own patch, with goal difference then becoming the deciding factor. The O’s need just one more point to cross the line – one more professional performance will see Justin Edinburgh lead the O’s to the Vanarama National League Championship and with it promotion back into the Football League.