Written by Jon Good in The Sunday Sessions👁 313

With £1 million at their disposal from KLF earnings, they decide to make a statement by destroying the cash. With a security firm handling logistics and verifying that the money is real, Drummond and Cauty toss the money into a fire on the Island of Jura in Scotland – it took about two hours to burn all the cash. Drummond said “We were burning the money in bundles as it was taking too long and we just wanted to get back to our hotel room.”

The event was filmed and witnessed by reporter Jim Reid, who writes about it in The Observer.  Drummond also said, “We wanted the money, but we wanted to burn it more.”

In 1995, the film  – “Watch the K Foundation Burn a Million Quid“ was released, documenting the event. At the end of the video they said they will be back 23 years later. 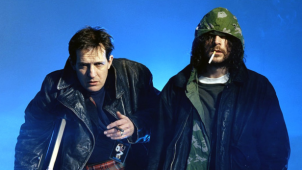 In the summer of 2017, they came back in an ice cream van, to Liverpool, where an event was held in search of an explanation for why they burned the money.
The event was called “Why Did the KLF Burn a Million Quid?”  They had no convincing explanation for what they had done, and hoped other people could provide one.

People were angry. How could they have done something so reckless?

Drummond and Cauty did not express opinions. They felt they had nothing more to add. It was up to the audience to vote for the most convincing reason on offer. So we still do not know why they burned the money. Its a mystery. Their book is called 2023, so we may get answers in the near future watch this space.