In tonight’s Orient Hour hosts Andy Gilson, Stuart Minchin, Darin Burrows are joined on the telephone by Barry Lakin and they have for you not one, but TWO, special guest interviews: Dave Victor is in conversation with ex-O’s legend and Fans Favourite, Jabo Ibehre, on his plans after his recently announced retirement as well as memories of his time at the Club including promotion at Oxford in 2006; and Andy Gilson is in conversation with The JE3 Foundation’s Charlie Edinburgh to discuss #JustinsLaw and the forthcoming “JE3 Day” on 19 December. For more details of JE3 Day and the Foundation in general then click here and follow the JE3 Foundation on Twitter.

The panel also discuss the recent League 2 fixtures at home v Newport County and away fixture to Morecambe as well as reviewing the forthcoming fixture at home to Crawley Town.

Don’t forget, that as London now in Tier 3 supporters are no longer permitted to attend the Breyer Group Stadium and the proposed ballot has been cancelled. However, this fixture IS INCLUDED in your Season Card streaming pass. If you are not a Season Card holder and wish to subscribe to any of the forthcoming matches on the #OrientLive streaming service – Click Here to see the streaming passes on offer. 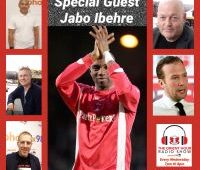