Billericay Town used their second “virtual” supporter forum last night to update the fans on the latest developments at the club and announce the launch of a second artificial pitch for community use.

On a well-attended “Zoom” call, Co-owner, Nick Hutt, provided the latest news around the club, Operations Manager, Kim Coster, covered the new season ticket arrangements and First Team Manager, Jamie O’Hara, reassured that a high quality squad is actively being constructed that the whole Town will be proud to watch. 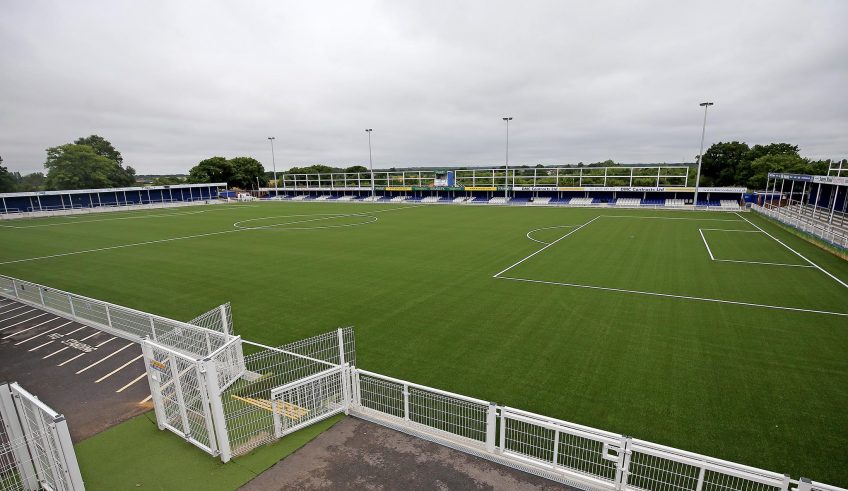 With many concerned at the impact the COVID-19 pandemic is having on everyday life, Billericay’s supporter update brought them all something to reassure that the future will be better. With the club now in safe hands, the news of a “second wave” was welcomed. A second wave of investment, that is, as one new pitch will soon become two.

With construction of the ‘FIFA Quality Pro 3G’ pitch proceeding at a rapid pace since commissioning in early February, a visibly proud, Hutt, takes up the story. “The first pitch is now finished, personally I think it looks amazing and far better than I ever thought it would. We’re so pleased with it.”

With a FIFA inspection of the surface already successfully completed, soft launch and inaugural socially distanced Colts and Girls training sessions are expected late next week. On a roll, Hutt had more positive news to impart as he revealed further investment plans for the land adjacent to New Lodge, previously utilised for car parking facilities.

“Work on the second pitch will start on Monday and should be finished in the early part of September. At this stage, we’re just going to lay the pitch, do the floodlights, the caging, and the foundations for the second clubhouse.” Whilst the COVID-19 pandemic brings considerable uncertainty, the owner’s strategic vision remains undimmed and investment for the long-term to create a community hub for all is proceeding at a remarkable pace. 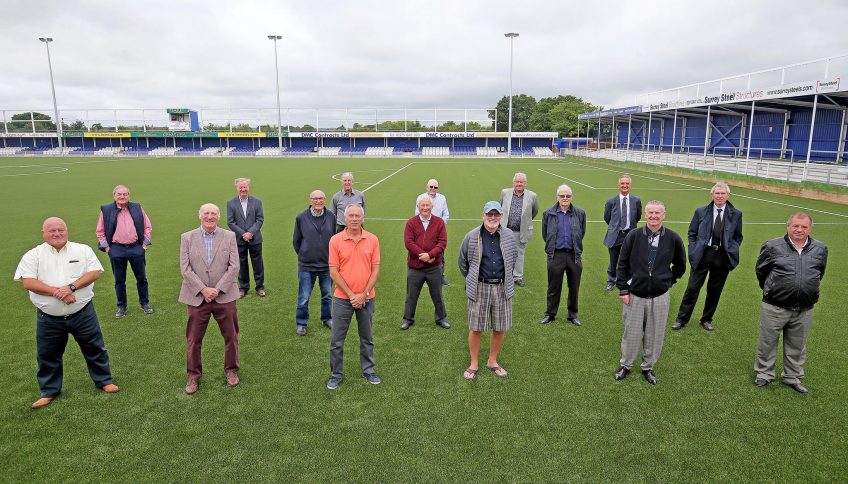 Billericay legends of the 1970’s and 1980’s gather to inspect the new pitch and remember former manager, and member of the club hall of fame, Colin Searle, who recently passed away. Photo Courtesy: @nickyhayesphoto

As restrictions across the country are gradually relaxed by government, there is some optimism that we are at least a little closer to live football taking place. To secure a place at the side of the action, news on season ticket availability was provided by Coster. Available to pre-order online via the club’s official website from Friday 10th July, at an “early bird” discount until month end, purchase may be the best way to ensure attendance, as Hutt updated:

Judging from social media comments the following morning from supporters, following O’Hara’s TalkSport advice to “buy a season ticket and support your local club”, the risk of missing out on attending the first match on the new pitch is not one they wanted to run. 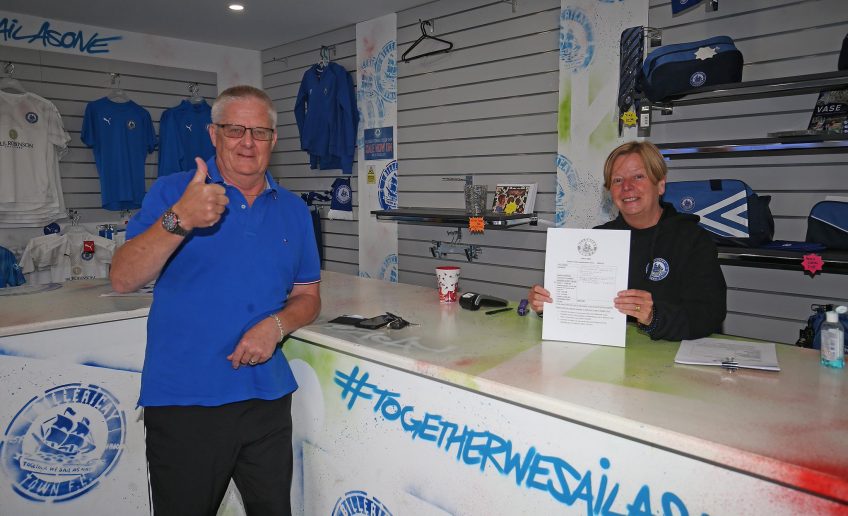 The season ticket also serves to provide a window into a world that stretches far beyond the Men’s First Team. This is perhaps one of the best illustrations of the reach of the club into the wider community. Coster went on to outline the range of games that season ticket holders will have the option to attend in addition to the Men’s First X1 matches as part of the package of benefits:

“That will be U-23’s, U-18’s, Women’s Games, and Colts and Girls Matches so there is a lot of value in purchasing the season ticket”, she added. 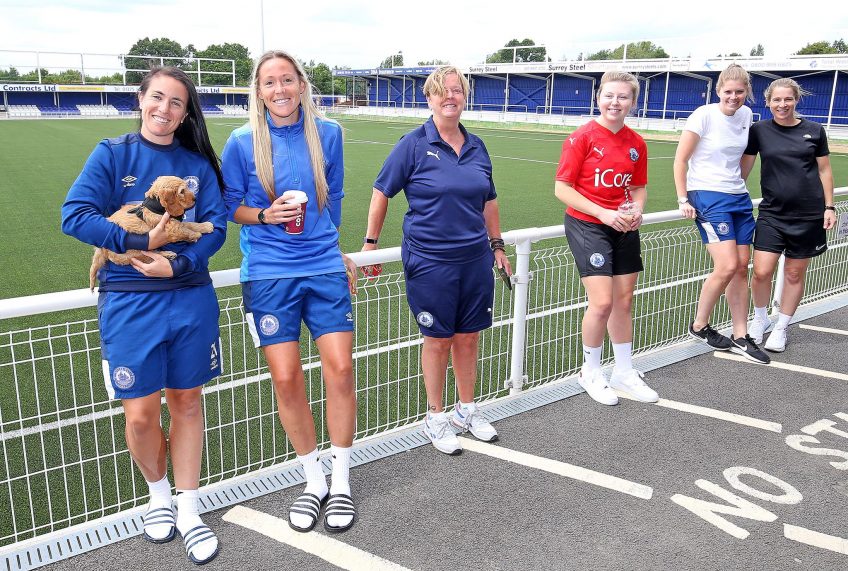 In contrast to the high level of activity on the infrastructure side, it has been outwardly quiet on the playing front. After a stuttering campaign just completed, the Blues rode their luck as a poor away record left the club perilously close to the relegation places. A clear-out seems to have been the order of the day with significant change signalled by the manager:

Those changes will not include the four retained players, goal-keeper Alan Julian, centre-back, Ronnie Henry, midfielder, Doug Loft, and striker Jake Robinson. Constituting the spine of the first X1, they will all be at the club for the new campaign. Otherwise, O’Hara stated, “There may be a couple of negotiations still in the pipeline but the rest of the players will be leaving. It’ll be a new team for next season”, advised O’Hara.

O’Hara provided further background. “We are really close to getting a squad together. We’re keeping a few things under wraps… I would say we’ve got two or three over the line confirmed for next season.” It is understood that these were all playing National League football last year. 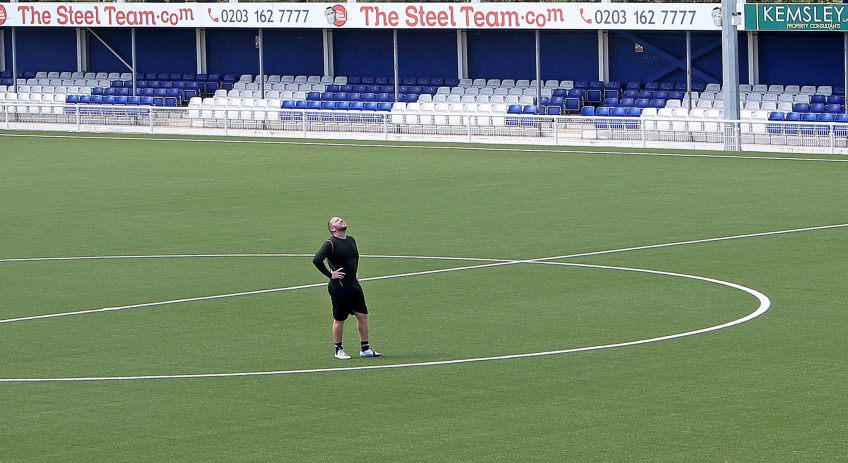 To whet the appetite for a return of a former Blue, he teased, “We may have one fan favourite coming back, which I’m working on getting over the line”. With thoughts turning to likely replacements, the young manager was quick to scotch rumours of one returning star. Speaking about another potential signing, he said,  “It is very close to Sam Deering but it’s not him, you’ll be very excited about the player we’ll be bringing in.”, clarified O’Hara.

Whilst the virus generates a high level of uncertainty on when football can resume, O’Hara has been fully supported by the owners financially.  He joked, “I’ve tried to squeeze every pound out of the Board”. He went on, “Every player that I’ve wanted so far, I’ve managed to get.” It is fair to assume that ambition to have leading facilities at non-league level also breeds an appetite for success on the pitch as investment is made to move up the pyramid. 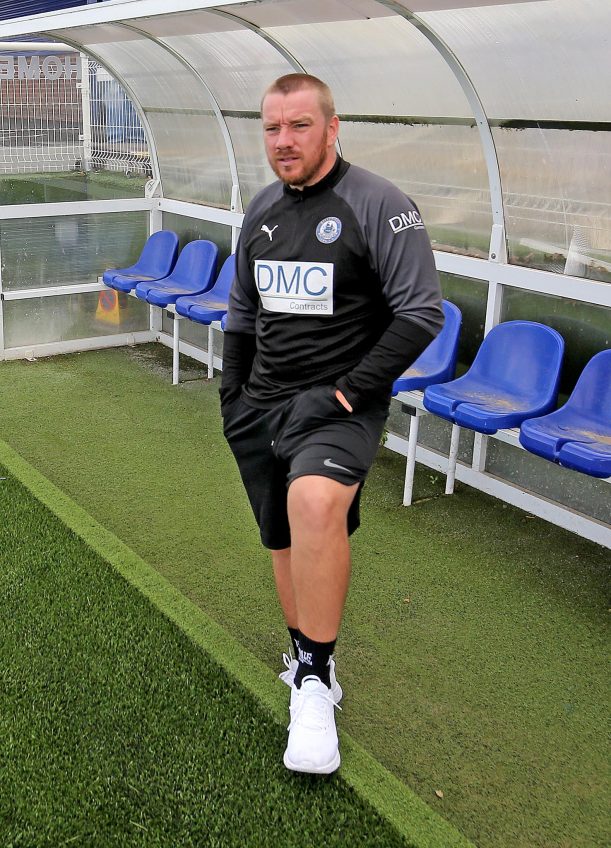 Where all the on-pitch decisions are taken. O’Hara getting used to his new dug-out. Photo: @nickyhayesphoto

With incomings come outgoings and confirmed departures include midfielder, Alfie Potter, who could not agree terms for next season. Striker, Femi Akinwande, who had sought full-time football, has moved on Stevenage Borough. More encouraging news was available on commanding centre-half, Michael Chambers, who is currently considering a new deal.

Clarity is hard to come by for what are obvious reasons. Club officials have been in contact with the League for information on current thinking with respect to a start-date for a new season. For now, an indicative mid-September guideline is the soft guidance to work with.

Co-owner, Alex Morrissey, responded that “we’re gearing up as a club to start mid-September and as soon as we know more, we’ll let you know”.

Supporters next season will be sitting in a re-named main stand. With the Board, former owner, and the Harry Parker family reaching collective agreement, the main stand will be known as the “Glenn Tamplin Stand”. A decision that may draw a mixed reception, his time at the club was something of a roller-coaster with highs interspersed with low’s.

What is undeniable is that Billericay Town was given a considerable leg-up the non-league ladder due to his contribution as Hutt reflected, “He did an incredible amount for the club and we think it is only right that he is honoured in an appropriate way.”

Looking forward to the bright future that is opening up for the club, committed owners have honoured every pledge to invest in leading facilities available to the entire community. It would have been easy to blame the virus and stop investment.

Instead, it has been all systems go and there has never been a better opportunity for the whole family to participate. With sides from U-7’s to U’23’s, and walking football for the 50’s and over starting on Thursday July 23rd, there is no excuse for not getting involved!