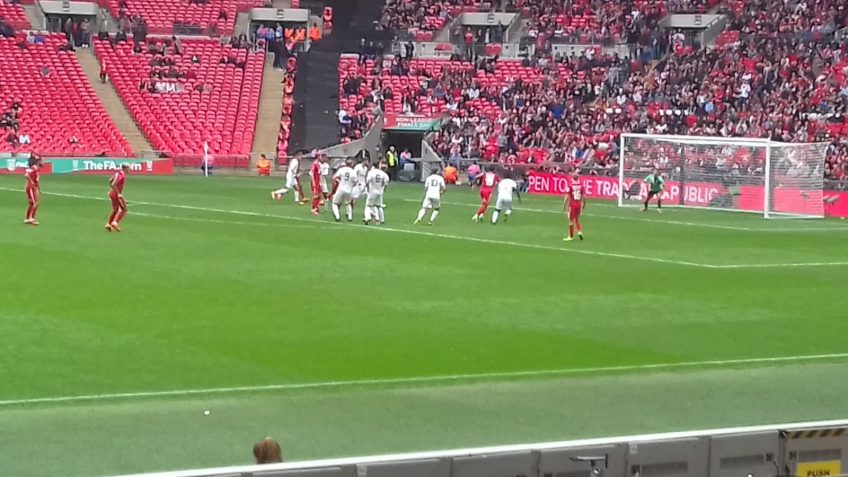 Leyton Orient failed to land the Non-League Double on Sunday as their Wembley curse continued – the O’s have now had a hat-trick of showpiece games at Wembley that have gone the way of their opponents. AFC Fylde returned to Wembley eight days after they had failed to show up in the National League Play-Off Final against Salford City. A wonderful free kick from Danny Rowe landed the Lancashire side the FA Trophy.

The O’s certainly started the game on the front foot with Jobi McAnuff having a cross and then a shot both cleared in the opening five minutes. But after that flurry the O’s then went back into their shell, while the Coasters didn’t really register any chances of note until the 13th minute when a through ball aimed towards Alex Reid was cut out by Dean Brill.

As the half wore on it was to be the Coasters who had more of the chances starting with an Alex Bond shot that was fired over the cross bar after good approach play from Tom Brewitt. Danny Rowe had a go shortly afterwards with a shot across the O’s goal that needed a Brill save to keep out, then Nick Haughton had another bite but could only place his shot into the side-netting. But the O’s stopper had to be at his best to tip a decent shot from Reid over the bar, then Marvin Ekpiteta cut out a Fylde through ball, but Haughton was able to gain possession and kept the move going,  playing in Reid who could only hit a tame shot straight at Brill. It had been a good spell from the Coasters with the O’s finally mustering another shot at the Fylde goal in the 25th minute when James Brophy drilled a shot straight at Jay Lynch the Fylde ‘keeper. The O’s had not managed to get any rhythm going, whereas Josh Coulson had to block a Rowe cross, and then had to head away another Rowe ball into the O’s box.

The O’s did manage to win a corner in the 34th minute after Josh Koroma and Macauley Bonne exchanged passes with the final ball being deflected away. The resulting corner darted towards the back post but Ekpiteta failed to make any connection, and the O’s were wasteful as Turley placed a cross to close to the Fylde ‘keeper after Koroma had weaved his way into the Fylde box but couldn’t get a shot off. Koroma went on another run in the 40th minute, going past two players before playing a one-two with Bonne; the resulting shot was then fired over the bar by Koroma. Two minutes later and Koroma again drew a blank when he placed another shot over the bar.

The best chance of the half came in the 43rd minute when Rowe delivered an accurate cross towards Bond who was perfectly placed at the back post, but the resulting header was put the wrong side of the post. Fylde had one further chance before the half was out as Reid let rip with a low shot that Brill saved.

Dave Challinor must have told his team to keep the pressure on as AFC Fylde started the second half in buoyant attacking mood and Brill was having to claim a cross inside the opening sixty seconds of the re-start. The O’s switched to their 3-5-2 formation, with Jordan Maguire-Drew coming off the bench at half-time in place of Turley. It was to be the young O’s midfielder who crafted the O’s best chance of the game thus far via a free kick that bent around the Fylde wall before hitting the post. Soon afterwards an O’s corner was headed wide by Happe. The O’s had finally got going it seemed, with Widdowson pacing down the left flank and crossing to Bonne, but the move ended due to an offside.

The O’s continued to press; in the 55th minute Maguire-Drew, who had been on fire since he came onto the pitch, went on another run that only ended after Jordan Tunnicliffe put in a well-timed tackle to win the ball. Three minute later and Maguire-Drew dinked a ball into Clay’s path but the final shot lacked direction.

The O’s had certainly had more of the possession, were controlling the game and had come close a few times. But it was to be AFC Fylde who broke the deadlock, perhaps against the run of play, but Danny Rowe’s goal was absolutely superb. It was starting to look like it was going to be one of those games where one moment of class was to be the deciding factor. Rowe, a much feared goal scorer at National League level, certainly delivered that as he bent a free kick around the O’s wall that crashed into the net.

Orient did rally straight after conceding with a Clay cross being claimed by the Fylde ‘keeper. But there was also a sense that perhaps this wasn’t going to be Orient’s day as a shot from Widdowson  struck the post; then the rebound was fired goal ward by Maguire-Drew but Harrold somehow got in the way and inadvertently helped Fylde prevent the O’s from scoring as his body blocked the shot.

In the 77th minute McAnuff passed to Maguire-Drew who flashed his shot wide. The O’s drew further blanks as Harrold missed the target with two headers, while Brophy at least got his shot on target but Lynch was equal to it.

Croasdale nearly took the game beyond Orient’s reach in the 88th minute when his shot was only narrowly wide. Five minutes of stoppage time saw Reid fire a shot wide for Flyde, while a final Maguire-Drew ball into the Fylde box was caught by Lynch.

The Non-League Double may have eluded Orient’s grasp but AFC Fylde perhaps deserved their day of glory after missing out on promotion themselves. Rowe took his chance and means that his team now go in the history books as the second team to have won both the FA Vase and the FA Trophy. The fact that they did it by beating a club soon to be plying their trade in the English Football League may well stoke up  their own promotion ambitions.