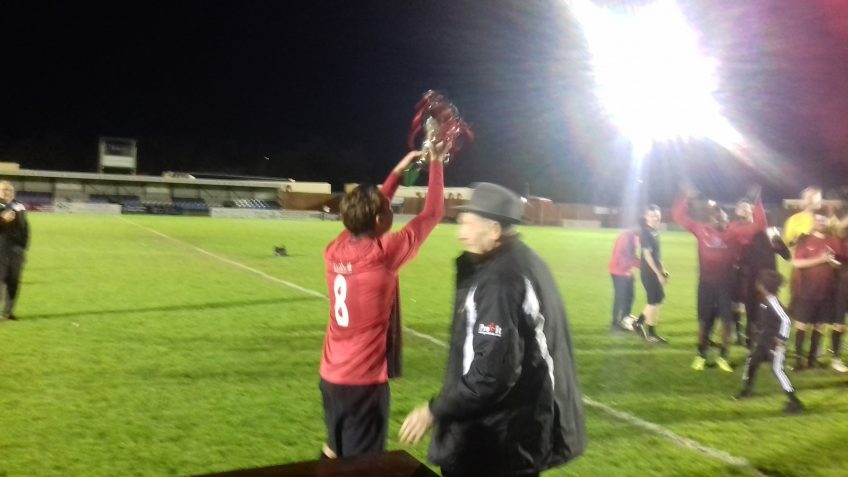 A first half blitzkrieg landed Bishop’s Stortford Swifts their fifth Senior League Cup success, but Catholic United staged a second half comeback that meant that Swifts, who looked home and dry when the referee brought the first half to a close, had to dig in after their opponents attempted to do their own re-anactment of the shenanigans that took place in last week’s European Cup Semi-Finals Catholic scored twice in the second half to seriously cut into their opponents 3-0 half-time lead, but ultimately weren’t able to complete a total turnaround.

I had a feeling before the game that this Final was going to produce a few goals and with only three minutes on the clock Swifts managed to launch their first attack. Josh Osude powered into the box and fired off a low shot that Louis Godwin-Green tipped around the post. The Catholic ‘keeper had to cut out a Swifts free kick soon afterwards; but then Catholic got the ball quickly up the other end with Thomas Kearney having a poke deflected away for a corner.

Kearney went even closer with his next effort, having a shot blocked on the line by Michael Moore, which also saw appeals for handball. The referee thought otherwise, and Catholic had no time to dwell on that decision as Swifts promptly launched a counter attack that saw Godwin-Green challenge Osude for the ball in a one-on one in the box,with Kearney now doing some defending as he hooked the loose ball, that had squirmed out of his ‘keeper’s grasp, well clear. The pace that Swifts had upfront caused Catholic problems and a ball over the top set Charles Brown loose, but Godwin-Green also showed quick reactions as he sped off his line to claim the ball.

With the action going from one end to the other, meant that it didn’t look like this one was going to end goalless and indeed in the 19th minute the deadlock was broken. Swifts worked a ball into Catholic’s box with Gavin Cockman supplying the final pass to Brown. An initial shot was blocked, but he made no mistake with the second attempt.

Catholic raised their game a little after conceeding and had a good spell of pressure but Max Kent could only rifle a shot straight at Pointer; Mike Summat made a connection of sorts with Tony Jacobs’s cross but the resulting shot lacked power and so was easily cleared. Another good cross, this time by Kent almost reached an unmarked Jacobs at the back post.

Cockman won Swifts a corner in the 36th minute with Brown heading the resulting set-piece over the bar. The next attack came two minutes later as a sweeping Catholic move ended with Sammut volleying a shot too high. Another goal you sensed was coming and it duly came in the 39th minute, and it was Brown again who supplied it. Mark Nougher set the ball in motion, laying off Brown, who paced his way towards Catholic’s goal, before placing a shot past Godwin-Green’s right hand that saw Swifts now open up a two-goal lead.

However a Kent free kick swept across the Swifts goalmouth and was only narrowly headed wide by Bradley Vaughan. It was evidence that Catholic were not dead and buried just yet.

However right on the stroke of half-time Swifts gave themselves a three-goal cushion after Cockman picked up a ball, shimmied past Godwin-Greene and rolled the ball home to complete a devistating opening 45 minutes from Bishop’s Stortford Swifts.

If Catholic United wanted to find a way back they needed to get a goal back early, and they duly did that as Simon Thomas rounded Pointer and stroked the ball home within three minutes of the re-start.

Baldwin went close for Catholic minutes later, but Swifts went close themselves in the 53rd minute when Osude chested a ball down and then drilled a shot wide. Swifts also saw a corner headed on target by Moore that was blocked then cleared. The end to end of the first half was being carried over into the second period. Simon Thomas, who came on midway through the first half in place of the injured Tom Hollingsworth, was heavily involved in Catholic’s forward forays and he had a header palmed to safety by Pointer. Moments later and it was Godwin-Green showcasing good goalkeeping as he denied Brown claiming a hat-trick. Swifts had a chance to seal the deal when Brown centred to Osude, but the shot was high and wide of goal.

Catholic kept chipping away and Thomas placed a header wide in the 67th minute. But Swifts were handed another opportunity to extend their lead a minute later when a miscued pass was pounced on by Brown, but his pass to Cockman ended up with the Swifts player blazing his shot over the bar.

Catholic United cut the deficit to only a goal in the 70th minute with a well worked goal that was a joy to watch. Player-Manager Dan Trenkel bustled his way forward and passed to Thomas whose cheeky backheel wrong-footed the Swifts defence, allowing Kearney time and space to make sure the move ended with the ball in the back of the net. Having looked dead and buried, Catholic United were now very much back in it.

Swifts fought fire with fire as Cockman and Brown combined to set up Osude who again wasted the opportunity and fired his shot too high. Cockman was then denied by a great save by Godwin-Green who dived low and at full-stretch to keep the ball out.

There was time for a bit of a flair up after Vaughan was heavily tackled by Osude which resulted in a bit of pushing and shoving. The referee brought out the yellow card and dished it out to Osude for the tackle and then to Brown and Robinson for their coming together. The two sides soon got back down to business, tearing into each other as the game entered the final ten minutes. Two Catholic crosses needed Pointer to come off his line and claim, while Brown had another attempt to complete his hat-trick as his great shot-on-the-turn was kept out by an even greater piece of goalkeeping from Godwin-Green.

Cockman should have sealed the deal for Swifts in the 86th minute when he was played through but he rushed his shot and theball ended up lnading behind the goal. It meant Swifts had to dig deep to cut out a final minute corner, and then had a further six minutes of stoppage time to endure. Osude had a further Swifts attack, managing to take the ball past Godwin-Green but then it run away from him before he could apply the finishing touch.

Catholic had a few final throws of the dice; Jacobs had a shot that took a deflection and almost crept over the line before being put behind for a corner. Then in the final seconds a long throw by Kearney was met by Vaughan’s header but Pointer pulled off one final save to ensure that Bishop’s Stortford Swifts went on to lift the cup.