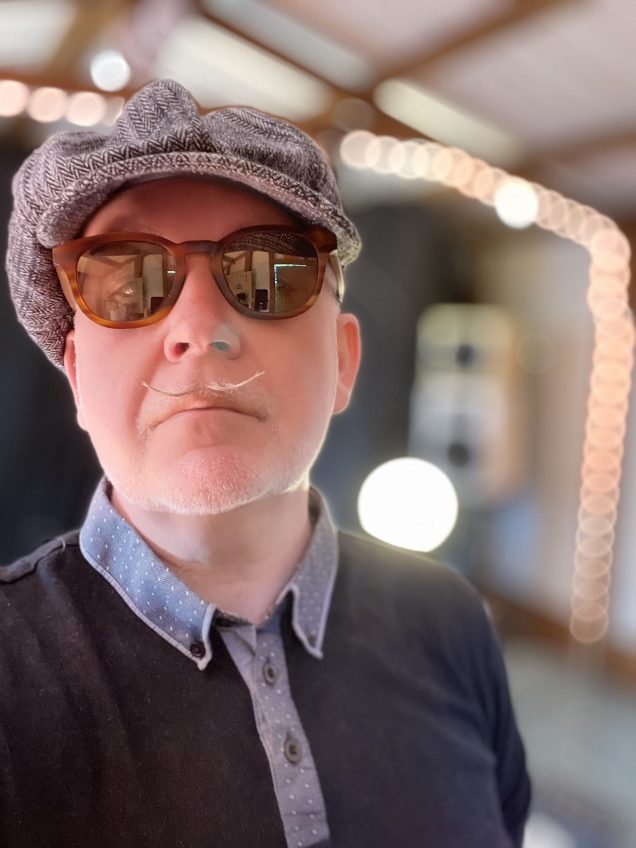 We’ve been playing out Tash Hagz’s new tune The Ballad Of Sanaleigh on our Rising Stars show recently – and we caught up with Tash to find out a little bit more about himself and his music.

I’ve been described recently as a ‘veteran songwriter’ – I have been writing for over thirty years even though I just started releasing music publicly last year. I was in a bunch of bands in my early twenties singing in some, guitar and bass in others; I even played keyboards in a band too at one stage!

When I packed it all in and got a proper job, I thought that that would be it. But no! Those melodies kept coming, the guitar kept strumming and over the years I built my own home recording studio!

Both my parents played in bands and there was always music on around the house. When I was 7 I became a mad Beatles fan and I taught myself how to play my dad’s old Spanish guitar,
with the help of an old jazz chords book.

My first live performance was playing a cover of ‘Please Please Me’ by the Beatles when I was 10 at a local village hall. It wasn’t long before I was busking with a friend every Saturday in Liverpool.

I fell in love with Blues and Rock and Roll and the Beatles. The Beatles led me on to Bob Dylan, Jimi Hendrix, The Doors, Led Zep.

In my teens I got into the Velvet Underground, Love and also more modern alternative bands such as The Chameleons, Spacemen 3 and Kula Shaker.

It’s modern-day Psychedelic Rock with a post-punk vibe! That means that whilst most of my influences are late 60s/ early 70s classic rock and progressive rock, I do have modern
influences which get worked into my overall sound.

I had two official releases last year called ‘Images Of Imogen’ – which you kindly played, and another called ‘Mankind & Destiny’. Both got great reviews in the underground music blog
scene. This year I released ‘Dependent On’ in May and this latest, ‘The Ballad Of Sanaleigh’ just this month. Again, I’ve been overwhelmed by the amount of great feedback I have been getting.

I’ve recently discovered a one-man band pretty similar to me, called The Bevis Frond. He’s ultra prolific, having released over twenty albums since the late 80s. He has a touring band and
sounds a cross between Robert Wyatt and Jimi Hendrix. I’ve also really enjoyed the new Brighton band, The Qwarks. Their songs are psyche and punky too and they have a very entertaining Instagram account!

Oh gosh – Macca, Stevie Wonder, Bob Dylan would be my gotos! That said, my stuff isn’t so far away from what Sean Lennon is doing, so that could be an interesting set up!

I’ve six other tracks professionally mixed and produced which I will release some over the next six to nine months, hopefully wrapping them up in an album next autumn. I’ve also got another
album’s worth of tracks recorded, and probably between two and three hundred other songs I’ve penned over the years.

I’m fifteen years from retiring from the day job but I hope I can get myself time to get more written, recorded and released!