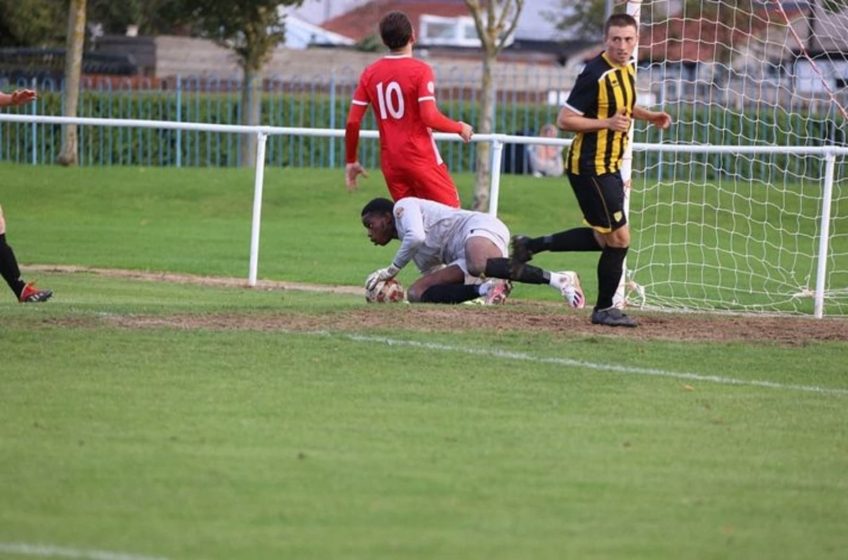 Points are needed as much by the teams near the bottom as teams at the top, and Sawbridgeworth Town, who almost won last weekend’s bottom of the table clash against Sporting Bengal United, managed to pick up all the points – upsetting leaders Stanway Rovers in the process. Harry Davidson bagged the winning goal, which keeps Sawbridgeworth Town in 20th, but they are now level on points with Southend Manor. Defeat also sees Stanway relinquish their hold on the Premier Division’s top spot, a position now picked up once more by Walthamstow after they managed to keep Athletic Newham at bay on root to a 2-1 win. The visitors have been the surprise package this season, making the jump from step six look relatively easy as they rode into Wadham Lodge sitting in 6th place, with the League top scorer Richard Kone also in their ranks. Kone was able to get a goal in the 52nd minute, which levelled the game after Stow had gone in leading 1-0 at the break. Jason Hallett had scored that goal, and it was he that scored again via a penalty in the 70th minute to win the game for the hosts. With Walthamstow top, it means Stanway Rovers drop down a place to 2nd, with the chasing pack also picking up points as the ESL title race this season looks like being a very keenly contested affair. Redbridge, yet to taste defeat on the road, continued that away winning run after Southend Manor were turned over 3-0. Anthony Martin scored twice, with Robbie Norris supplying the other as the Motormen end the day 3rd. Southend Manor now sit 20th, level on points with Sawbridgeworth Town who have picked up seven points from the last possible nine – Manor in that time have picked up zero points and are in fact on an eleven game losing streak. Saffron Walden travelled into the London Borough Of Redbridge Ilford went Saffron Walden Town, and the solitary goal from Michael Toner in the 30th minute was enough to win that one. The 1-0 win sees Saffron Walden end the day in 4th, while Ilford are down in 16th. Stansted are 5th after putting five past St Margaretsbury. Michael Mignot and Michael Salako bagged a brace each, with Jack Mitchell notching the other Stansted goal. Lawrence Ajong scored the host’s consolation and defeat sees them drop to 15th. Woodford Town are 9th, one place behind the team they beat on Saturday, FC Clacton, however the 3-1 away win now sees only goal difference separating the two teams. Jordan Lartey scored for the hosts, but the Woods replayed via Peter Angelov (17′), Chaynie Burgin (55′), and Jayden Silcott-Brown (72′) to seal the deal. Hoddesdon Town took all the points in their game at Clapton. Connor Bolton handed the Lilywhites a 10th minute lead, but the Tons equalised through Moshood Onasanya just before the break. The visitors scored again in the 65th minute: Larry Asare-Bediako the scorer, with the 2-1 win seeing Hoddesdon leapfrog Clapton into 17th place. Little Oakley won a seven-goal thriller against White Ensign, with Harry Mann and Greg Rodger scoring two goals each for the hosts. But it wasn’t all plain sailing as Luke Skinner levelled up from the spot, before Joe Gregory fired the visitors into a 2-1 half time lead. Little Oakley levelled up from the spot, then fell behind to a Luke Woodward goal before then going on to score twice late on to win the game 4-3. White Ensign end the day 7th, while Little Oakley move up to 14th. Sporting Bengal United suffered another heavy defeat that keeps them at the foot of the table. Cockfosters did the entertaining, on the pitch as well it would appear as they won the game 5-0 with Reuben Campbell, Ryan Wade, George Beattie, Reece Monsanya, and Kaidyn Michael the scorers.