This deal just went to pot!


If you’re ever tempted to use social media to sell unwanted items, here’s a cautionary tale for you.

Anxious to be rid of a catalytic converter in his possession, JAMES KERTZ from MISSOURI, shared a photo of said item on FACEBOOK MARKETPLACE last week.

Unfortunately forgetting to check the image before posting, he omitted to notice the large bag of meth and other drug related paraphernalia, including a syringe, prominently displayed in the background. 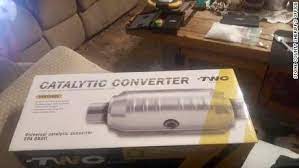 Stone County Sheriff Doug Rader, confirmed that police were tipped off about the drugs shortly after the advert was posted on line.

Officers promptly obtained a search warrant which uncovered 48 grams of meth and a handgun which he was not legally allowed to own.

Mr Kertz is now being held at Stone County without bond and has been charged with possessing a controlled substance.

He has prior convictions for possession of a controlled substance, resisting arrest, domestic assault and endangering the welfare of a child.

Sheriff Rader apologised to potential customers that the catalytic converter was no longer for sale, adding that Mr Kertz had since been provided with new accommodation.

Notorious author, Elinor Glyn, who at one time lived at Sheering Hall near Harlow, was the subject of Margaret Mills’ historical feature this week.

One of her books in particular caught the public’s attention – THREE WEEKS – published in 1907, which turned out to be a favourite of the then king, EDWARD VII.

Listen again here to what Margaret had to say about this incredible woman: –